The cross-tabulations definition is an analysis that uses a table to describe or summarize the relationship between two different variables. This term comes from the general concept of tabulation definition in statistics, which is the presentation of numerical values in a table that serves to summarize the findings of a research study. The table used in cross-tabulation is called a cross table, a two-way table, a contingency table (i.e., frequency tables), or a pivot table. In cross tables, one variable is represented in the rows of the table, and the other variable is represented in the columns. The cells contain numerical values associated with these variables, such as the number of times the variables were observed or occurred. Cross-tabulation is used in various statistical analysis programs to analyze various data types, such as SPSS (cross tabulation SPSS) and Excel.

For example, a teacher might use a cross-table to compare the rate at which juniors and seniors pass or fail an advanced statistics course.

Use of Cross Tabulation

Cross-tabulation, or cross tab analysis, is generally used for research purposes. It is often used to analyze the association, frequency, or probability distribution of categorical variables (categorical data) or variables representing discrete groups or classifications. Cross-tabulation is particularly important in a chi-square analysis, which uses cross-tables to analyze the likelihood that a variable or outcome will occur. Specifically, a chi-square analysis is used to determine whether or not there is a significant difference between the number of times something was observed to occur and the number of times it was predicted to occur.

Consider the following research questions that can involve cross-table analysis:

There are several benefits to using cross-tabulation. 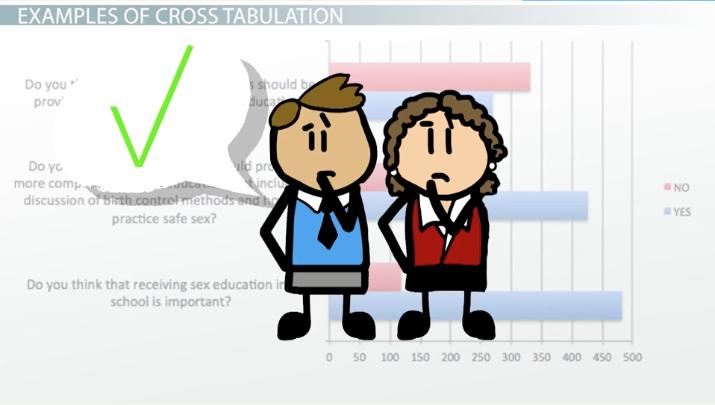 Consider the following cross-tabulation example to help illustrate how cross tables can be used to address research questions:

An economist wants to know if there is a relationship between gender and knowledge of a particular economic concept. Specifically, the economist wants to know the likelihood that men and women can provide an accurate definition of fractional reserve banking. The economist administers a survey to a group of men and women and asks them to provide a definition for the concept. After obtaining the data, the economist grades their responses in terms of being correct or incorrect and then constructs a cross-table to summarize the results.

Researchers often use cross-tables to compare categorical variables. Categorical variables are variables that represent discrete or mutually exclusive groups or conditions, such as gender or affiliation with a political party. Research might use cross-table analyses to address issues such as the relationship between gender and GPA or the relationship between political party and public approval ratings. The benefits of using cross-tabulation include reducing errors in reporting and interpreting data, highlighting statistical findings that might go unnoticed otherwise, and providing actionable summaries of statistical findings.

Mark recently opened a sports and fitness center in his town. In just the first week, he has already gained 148 regular customers, 87 of which are male and 61 of which are female. To get feedback on the products and services that his store is offering, he decided to conduct a customer survey.

Why is cross tabulation used?

Cross tabulation is used to compare categorical variables. It allows researchers to summarize large sets of data quickly and efficiently. It also makes it easier to understand trends in data.

What is meant by cross tabulation give an example?

What is the difference between cross tabulation and chi square?

Chi-square is a specific type of statistical analysis used to investigate the likelihood that a particular event or series of events will occur. Cross-tabulation is a general method of comparing two variables using a table.

How to Determine Sample Size

What is International Transfer Pricing?

Scatter Plot Diagram & Examples | What is the Purpose of a Scatter Plot?

Correlation Interpretation & Cautions | What Does Correlation Tell Us?