What is a Cubic Function?

A cubic function is a polynomial of degree 3, meaning 3 is the highest power of {eq}x {/eq} which appears in the function's formula. The simplest example of such a function is the standard cubic function, which is simply

Cubic functions often arise in situations where three factors are multiplied together, such as the volume of a rectangular box, which is equal to length times width times height. If each dimension is related to the variable {eq}x{/eq}, the result could be a cubic function something like this:

The function has degree 3 because if we expand it, by multiplying all terms involved, the highest power is the result of multiplying 3 {eq}x {/eq}'s. The graph of this function is shown below; as we will see, the graphs of most cubic functions have several basic features in common.

The Equation of a Cubic Function

where {eq}a, b, c, d {/eq} are real-valued constants. Remember that a cubic function is a polynomial whose highest degree term must be {eq}x^3{/eq}. This means that the coefficient {eq}a {/eq} must not be equal to 0. Lower powers may or may not be present, without changing the degree of the polynomial, so {eq}b, c, d {/eq} are allowed to be 0. Indeed, the standard cubic function does have {eq}b=c=d=0 {/eq} and {eq}a= 1 {/eq}. 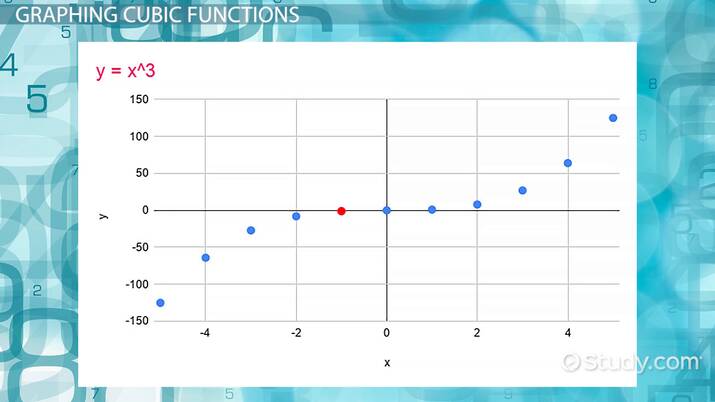 Coming up next: Point Estimate in Statistics: Definition, Formula & Example

How to Graph a Cubic Function

Cubic functions are more complicated than linear and quadratic functions, so it is often not easy to graph them based only on their equation in standard form. Creating a table of values and plotting points on the graph can be a good strategy, especially if we keep in mind one feature of cubic functions.

As an example, lets graph the cubic function

To create a table of values, we can choose a range of {eq}x {/eq} values, and calculate corresponding values of {eq}y{/eq}. Choosing values close to 0, including a few negative values, is often the best place to start.

Notice that the two graphs of cubic functions we have seen so far are very similar in shape. Both make a smooth, S-shaped curve that increases, then decreases, then increases again. Knowing this three-step pattern helps us accurately connect the dots to draw the graph of a cubic function. Also, seeing this pattern in the {eq}y {/eq} values in the table tells us that we have identified enough points to begin drawing the graph.

The points where a graph crosses the horizontal and vertical axes are called {eq}x {/eq}-intercepts and {eq}y {/eq}-intercepts. These make great reference points when graphing a function, and conversely, recognizing them in a graph can help us to identify the function's equation.

Can you identify the intercepts of the cubic function graphed below?

The other constant {eq}a {/eq} can then be determined from the value of the {eq}y{/eq}-intercept.

The complete equation of the cubic function in factored form is

It's important to note that not all cubic functions have three roots. Some may have two (including a double root), or even only one. For cubic functions with a single root, we won't be able to express the equation as a product with three linear factors.

The exact shape of a cubic function is completely determined from the values of the constants {eq}a, b, c, d {/eq} in its standard form equation. Two of these constants tell us particularly useful information about the shape of the graph.

The other important constant is the leading coefficient {eq}a {/eq}, which appears in both the standard and factored equations. This coefficient is a "stretch factor" which can make the graph taller and narrower if {eq}|a|>1 {/eq}, or wider and shallower if {eq}|a|<1 {/eq}.

There is one group of cubic functions that actually don't show the three-step pattern at all, and the standard cubic, shown below, is one of them!

The standard cubic function passes through the origin {eq}(0,0) {/eq} and is always increasing, without forming the distinctive peak-and-valley shape of the previous graphs. Two adjacent points on the graph are easily identified at {eq}(1, 1) {/eq} and {eq}(-1, -1) {/eq}.

Some cubic equations consist of transformations of the standard function and will have the same basic shape. Their equations can be expressed in the form

The constant {eq}a {/eq} is the same stretch/reflection as before, while {eq}h {/eq} and {eq}k {/eq} define horizontal and vertical translations of the parent function {eq}y= x^3 {/eq}.

To graph the function

we can translate the parent function 3 units to the right, and 4 units downwards. Next, we can plot the two adjacent reference points: 1 unit on either side and 2 units higher and lower because of the factor {eq}a=-2 {/eq}. Since the factor is negative, the whole function is decreasing, instead of increasing like the standard cubic. By identifying the transformations, we can produce a graph without a table of values, and by identifying only three points.

A critical point of a function is a point where it changes from increasing to decreasing or vice versa. The graph changes direction at these points, so they are often quite distinctive.

Another feature of a graph is its curvature, which can also be upwards or downwards. A point where the curvature changes is called an inflection point.

The equation is in standard form. We can identify the {eq}y {/eq}-intercept as {eq}d=2 {/eq} and that the graph is flipped, since {eq}a= -2 < 0 {/eq}. Creating a table of values is probably the best approach towards graphing this equation.

We can see that the {eq}y {/eq} values decrease at first, then increase, then decrease again, meaning we have enough to sketch the three-step shape of a cubic function. Notice in the graph below that this function is an example of a cubic with only one {eq}x {/eq}-intercept.

This equation is in the form of a transformation of the standard cubic. The parent function is shifted left by 3 units and upwards by 1 unit. The function is stretched by a factor of {eq}1/2 = 0.5 {/eq}, meaning it will be wider and shallower than the parent function. The points adjacent to the central critical point are 0.5 units higher and lower, instead of 1 unit.

In this lesson, we've learned how to recognize cubic equations and how to graph them. Cubic equations are polynomials of degree 3, which can be expressed in the standard form

The constant {eq}d {/eq} determines the {eq}y {/eq}-intercept of the graph, while {eq}a {/eq} stretches, compresses, or inverts it.

By identifying the {eq}x {/eq}-intercepts or roots of the cubic function from its graph, we can express its equation in factored form instead of the standard form.

Many cubic functions are most easily graphed based on a table of values. The typical graph of a cubic function shows a three-step pattern that alternately increases and decreases. The graph has two critical points where its direction changes, and between them an inflection point, where the curvature changes.

Cubic functions which can be expressed in the form

are transformations of the standard cubic {eq}y=x^3 {/eq}. These functions have only a single critical point, and are either increasing or decreasing, without alternating. They can be graphed more easily by translating, stretching, and/or inverting the graph of the parent function.

How do you find the equation of a cubic graph?

If a cubic graph has three x-intercepts then it is possible to quickly express the equation in factored form. The leading coefficient can be determined from the y-intercept.

How do you translate a cubic function?

A translation of the standard cubic function, y=x^3, takes the form y=a(x-h)^3+k. The constant h is a horizontal translation to the right, and k is a vertical translation upwards.

What is the equation for a cubic function?

The equation of a cubic function can always be expressed in the standard form y=ax^3+bx^2+cx+d, where a, b, c, d are constants, with a non-zero.

How do you graph a cubic function?

In many cases, a cubic function is most easily graphed by creating a table of values and plotting the points. If the equation can be factored, it is instead possible to graph it by locating its x- and y-intercepts.

How to Use the Binomial Theorem to Expand a Binomial

Using the Quadratic Formula to Solve Equations with Literal Coefficients

What is Trigonometry? | Functions, Formulas & Applications