Death in Venice is a German novella written by Thomas Mann and published in 1912. Originally titled Der Tod in Venedig, the story is around 20,000 words in length and has been translated into English. It focuses on a writer named Gustav von Aschenbach, whose life takes a physical and moral downturn when he takes a trip to Venice. On this adventure, he experiences a new view of the world that stirs emotions and conflict within him.

Who Wrote Death in Venice?

Death in Venice is one of the greater works by Thoman Mann (1875-1955), who also wrote The Magic Mountain, Joseph and His Brothers, and Doktor Faustus. He won a Nobel Prize in 1929 from a committee that honored his epic, Buddenbrooks (1901). He was one in a family full of writers who commented on German and European society. Opposed to the Hitler regime, he fled Germany and lived in multiple countries, including the United States.

Death in Venice is believed to be autobiographical. In 1911, Mann traveled to Venice, observing a lifestyle that contrasted with his home country. Though traveling with his wife, Mann is said to have fancied a young man he met in Venice. In 1912, he exaggerated this experience in the book Death in Venice. He patterns the main character after himself, a writer. This writer sees the loose morals of Venice and develops an infatuation with a young Polish boy. Though the story does not show any physical manifestation of this relationship, Mann may have been expressing a hyperbolic version of his own thoughts that were never carried to experience.

Death in Venice plays out during a historical plague that ravaged Italy. Mann personally witnessed the cholera epidemic in 1911. He recorded many of his observations in his novella, including the health inspections at the port of Venice and the German newspapers describing a disease that had spread from the East and the Mediterranean to Europe. 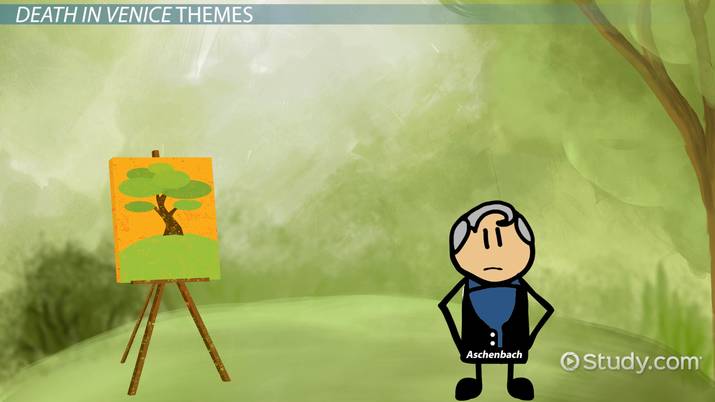 Try it now
Back
Coming up next: Defoe's Moll Flanders: Summary & Analysis

Death in Venice introduces the reader to a brilliant writer who meticulously and painstakingly strives over his art. Though he crafts on a strict schedule, he questions the reasons for his popularity, attributing his fame to generational preference or personal whim. As his life moves into self-loathing and an ultimate quest for nothingness, he decides to take a journey.

Near Venice, he encounters an odd gondolier. The interaction feels threatening, foreshadowing the change of character that he will experience in his sojourn. He is first repulsed by the character but then begins adopting the very behaviors that he had previously seen as obscene or vile. He begins adapting to his Venetian surroundings of sexual miscreants, lending himself to an unhealthy obsession with a 14-year-old boy. As this boy haunts his dreams and invades his every waking thought, he begins to fall into illness.

Cholera spreads throughout the city, thus causing widespread death and political panic. The illness seems to be a combination of not only a physical epidemic plaguing the city of Venice but also a moral degradation of sexual promiscuity that calls into question the conservative and intellectual upbringing of Gustav von Aschenbach.

A large deal of the novella focuses on the inner thoughts of Aschenbach. His obsession with the boy is described in great detail. The book's closing scene shows Aschenbach at the beach watching the Polish boy. Just as the boy seems to requite the attention (only for a moment), Aschenbach slumps in his chair and dies. The reader is left to determine whether the physical end resulted from a common disease or a moral decline.

Death in Venice can be subjected to many interpretations, including a commentary on loose living or a strict lifestyle. While some may claim that the piece offers liberal lifestyles and promiscuity as a form of decay and death, others argue that it is the throwing off of conventional standards that frees the character to attain his greatest dream.

The thoughtful infatuation with Tadzio progresses through several stages. The age difference between Aschenbach and the young man suggests, at first, a paternal or mentoring situation, with Aschenbach reflecting on his lack of an heir at the end of his life. As the obsession grows, the young character becomes an aesthetic, while the artistic Aschenbach compares him to the perfection of a Greek statue and admires his presence as pure beauty. The infatuation eventually morphs into the erotic, a commentary on sexual orientation in early 20th Century Europe, as Aschenbach both indulges in his attraction but also restricts himself from taking any physical action.

Themes in the Death in Venice Book

Besides infatuation, a second theme played out in the novella is decay. Physical decay is evident in the cholera outbreak, and moral decay is illustrated through the outlandish lifestyle observed in Venice. Cholera takes the lives of people in the city and presumably infects Aschenbach himself. This disease is paralleled by the behaviors of the people in the streets, as the main character observes those who drink, smoke, wear make-up, and practice sexual promiscuity. The story suggests that moral depravity and physical decay are intertwined in the downfall of the main character and those around him.

The book as a whole emphasizes the conflict between intellect and inspiration, beauty, art, passion, and youth. Aschenbach suffers from writer's block at the beginning of the story but receives a newfound inspiration in his obsession with Tadzio, thus reinforcing his belief that passion and art are the results of experience and that beauty is found in a beholder's involvement or recognition of that experience. Just as Aschenbach feels revived in his passion and art, his youth begins to slip away. It is unclear whether his ailment is a result of the physical disease or his infatuation. The reader then assumes that the two are related in a destructive fashion. The more revived he feels in his mind, the more sickly he feels in his body.

The final pages of the book display a distorted memory of the teachings of Socrates. Aschenbach positions himself in an imaginary conversation where he remembers, yet questions, the words of Socrates: that art is the pursuit of beauty. Aschenbach ponders whether beauty (represented by Tadzio) has led him to wisdom or simply to sin, thus suggesting that drawing his source of inspiration in mind is also the purging of his very life.

Adaptations of Death in Venice

Performances and adaptations of the story have appeared over time. In particular, the 1971 film adaptation caught the attention of many viewers, winning a Cannes award. This film by Luchino Visconti shows Aschenbach as a composer/conductor rather than a writer, thus allowing for a film of dramatic musical numbers and minimal dialog. The visual aspects of the film focus on the infatuating thoughts of the main character and illustrate the cholera epidemic with the white-washing of public structures and the eventual death of Aschenbach on the beach.

Besides a few book translations, other retellings included a musical version by Benjamin Britten in 1973. This two-act opera was then adapted in 1981 into a film by Tony Palmer.

Death in Venice is a German novella by Thoman Mann. The story focuses on a writer named Gustav von Aschenbach, whose life takes a physical and moral downturn. During a trip to Venice, Aschenbach strays from his rigid, disciplined lifestyle and indulges in a new world of fantasy, intoxication, and infatuation. His moral change parallels his own physical decline, and he ultimately dies, presumably of cholera.

Through the story of Aschenbach's decay, the piece juxtaposes ideas, questioning relationships between art and beauty and between intellect and inspiration. In dealing with the artistic works of Aschenbach, Mann posits that the appreciation comes from a personal relationship with an artist's experience and that intellect is simply a combination of several bursts of inspiration. Furthermore, art itself is the pursuit of beauty as one beholds it. Aschenbach's obsession with a beautiful young Polish boy named Tadzio, who represents the very idea of beauty, becomes his inspiration but also his obsession. He remembers, yet questions, the words of Socrates: that art is the pursuit of beauty. Aschenbach ponders whether this quest for beauty is ultimately virtue or folly, thus ending in his death.

What happens at the end of Death in Venice?

The book's closing scene shows Aschenbach again watching the Polish boy. Just as the boy seems to requite the attention, Aschenbach slumps in his chair and dies. The reader is left to determine whether the physical end resulted from a common disease or a moral decline.

What does Tadzio represent in Death in Venice?

The character Tadzio symbolizes many concepts for Aschenbach. The age difference could suggest a paternal longing. Tadzio could be an illustration of the sexual orientation sub-culture of Europe in the early 20th Century. Tadzio may also represent beauty itself, a pure presence to be admired.

Why did Thomas Mann write Death in Venice?

Death in Venice is somewhat autobiographical, exaggerating Thomas Mann's trip to Venice. Mann personally witnessed the cholera plague in Italy in 1911 and met a young man that fascinated him. He wrote the novella in 1912, retelling the story in extravagant form.

What is the theme of Death in Venice?

Death in Venice presents several themes, including physical and moral decay, the conflict between intellect and inspiration, beauty, art, passion, and youth. The major messages lie within the relationship (mostly in the mind of Aschenbach) between the main character and the young boy, Tadzio.

What is the disease in Death in Venice?

The physical disease that plagues Venice in the novella is cholera. The disease takes many characters' lives as it took many people's lives in historical Italy. The author suggests that this physical disease comes alongside a sub-culture of forbidden and outlandish behaviors.