An ocean trench is a deep indent in the surface floor of the ocean and is the deepest part of the ocean. Trenches are located in subduction zones at or near a convergent boundary, continental crust, and/ or volcanic islands. The Mariana Trench is the deepest known trench globally, located more than 35,000 feet below sea level. The hadal zone is the zone associated with the area at the bottom of the ocean where trenches are found.

How are Trenches Formed

The earth's surface comprises tectonic plates, which are sections of the earth's crust that move and change. Ocean trenches are formed when:

The push of volcanic material results in the formation of islands and causes large earthquakes. Earthquakes caused by subduction are some of the largest in the world, even when compared to terrestrial earthquakes, and can happen anywhere a subduction zone is present. These large earthquakes can sometimes even ripple out and be the cause of major tsunamis. The volcanic material in lower levels of the trenches can feed certain organisms as well. While crust is being pulled down below the trenches, it causes a deeper hole to form on the outer surface, causing the trenches to be bottomless. We can measure the depth of the ocean using a process called bathymetry. There are two main layers of the mantle involved in the process of subduction, which is the lithosphere and asthenosphere. The lithosphere is the upper layer of the mantel and consists of the tectonic plates. In contrast, the asthenosphere is the lower layer of the mantel and consists of lava and rock at very high temperatures from the earth's core.

Where are Trenches Found

Trenches are found on the floor of the sea; however, their common name is deep ocean trenches because they are more often found in the deepest areas of the ocean. Trenches are formed in subduction zones where tectonic plates collide. There are many known trenches that scientists continue to study. Some examples of these include:

All three trenches are located within the Ring of Fire, also known as the circum-Pacific belt, where most of the earth's volcanoes are. This area also has an increased risk of earthquakes and a large majority of high mountain ranges. 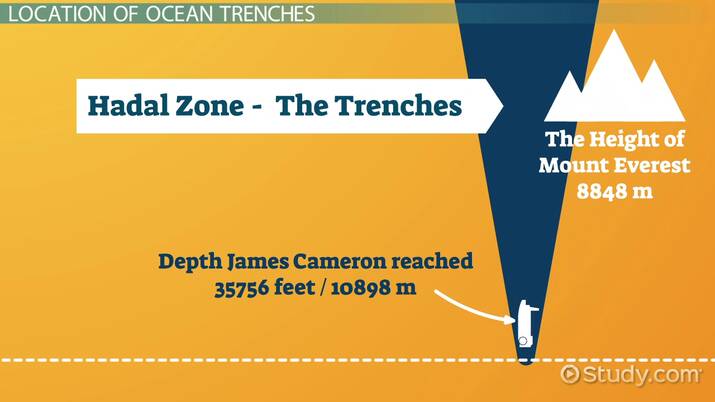 Coming up next: Gills: Definition & Anatomy

What Happens in Deep Ocean Trenches

The deeper you go into the ocean, light, oxygen, and food sources start to dwindle. Diversity is high, but the amount of living organisms is low. However, even with these fundamental requirements for life being scarce, organisms have been able to adapt. Many deep-sea organisms have evolved to live in areas where other organisms cannot. They can do this by using tools such as bioluminescence, feeding on carbon instead of oxygen, and dwelling near hot vents that release nutrients into the water column.

There is an abundance of xenophyophores in the Mariana Trench, a type of foraminifera protist. Protist is a phylogenic kingdom and consists of single-celled organisms. Under this category is foraminifera which can be benthic, meaning they live on the bottom of the ocean, or planktonic, meaning they live throughout the water column. The xenophyophore nestles into the sediment and begins to create its casing using materials that surround it. These unique casings are called tests where other organisms can live. Scientists are still trying to learn more about these organisms, which is difficult due to their fragile frame and living in an isolated environment.

Located in the Horizon Deep area of the Tonga Trench are Alicella gigantea, the largest of all amphipods under the phylum Arthropoda and are crustaceans. Arthropods have segmented bodies, hard exterior skeletons, and molt to grow larger. They use an antenna to sense (taste, feel, smell, etc.) their surroundings; this is helpful in the dark benthic areas of the ocean. Little is known about the Alicella gigantea and its behaviors because it lives in such an isolated environment.

The environmental conditions in a trench vary but are extremely different from waters closer to the surface. Organisms that are benthic dwellers have evolved differently to adapt to their unique surroundings. Trench environments are cold, dark, is high in pressure, and low in oxygen. One way organisms have adapted to darkness in the trenches is bioluminescence, a chemical reaction within an organism that produces light. Bioluminescence can be used for many different things in marine life, such as mating or luring prey. Food or how organisms receive their sustenance is unique as well. Some organisms have adapted to feed off the particles and nutrients dispersed from underwater ocean vents, such as dissolved sulfide. Other organisms have evolved together to create a unique food web that operates in the deep ocean, while some organisms feed on marine snow or organic material made up of organisms from higher in the water column. The pressure in the ocean grows further down you go. At the bottom of the Mariana trench, the pressure is equal to 8 tons per square inch. Organisms have adapted to this immense pressure in many ways. Some evolved without gas-filled organs; others have evolved exteriors that can withstand high pressure.

Life began on earth around 3.7 billion years ago. There are many different theories on how this occurred; however, current research suggests that we can learn a lot about the beginning of life from organisms and how they live deep in the ocean trenches. Early life on planet earth was hostile and quite similar to the harsh conditions in the Mariana trench. Some scientists believe that studying the life patterns and organisms in these environments can help us better understand how life evolved. Some recent research indicates that because of the harsh conditions of early earth, the organisms that survived did so by living far beneath the ocean's surface. Today, we have found traces of those organisms living at the deepest parts of the ocean in areas such as the Mariana trench, which scientists are still trying to decode and piece into the bigger picture.

An ocean trench is an indentation in the ocean floor and is the deepest area of the ocean. Trenches are formed through subduction, which occurs when tectonic plates collide and push one plate beneath the other. Trenches can be found all over the surface floor of the ocean at subduction zones. The Mariana trench is the deepest known point in the ocean at over 35,000 feet deep. Life in these deep areas has evolved to survive in high-pressure, low-oxygen environments. We are still learning so much about trenches and the organisms that live there; however, recent studies suggest these organisms can help us better understand the evolution of life on earth.

What is the deepest trench in the ocean?

The Mariana trench located off the coast of Aisa is the deepest trench in the world; it is recorded as being over 35,000 feet deep.

What is the meaning of ocean trenches?

An ocean trench is a deep indent in the surface floor of the ocean and makes up the deepest parts of the ocean.

Ocean trenches cannot be divergent; however, there are three types of boundaries that explain the process of two tectonic plates coming together or separating. These different boundaries include 1) divergent, 2) transform, and 3) convergent. Ocean trenches are convergent, meaning they come together.

How ocean trenches are formed?

Trenches are formed in subduction zones where tectonic plates collide, and the old sediment is pushed down below the new sediment, which causes a ditch to form.

What is Economic Geology?