What is a Degradation Ceremony?

Harold Garfinkel was a professor emeritus affiliated with the sociology department at the University of California, Los Angeles (UCLA). While at UCLA, Garfinkel focused on developing sociological theories that explained how members of society collaborated to shape and influence the social order, rules, and expectations. These theories became a subdiscipline in sociology called ethnomethodology. In 1956, Garfinkel wrote the article "Conditions of Successful Degradation Ceremonies" that introduced the term degradation ceremony (or status degradation ceremony). He defined a degradation ceremony as communicative work between individuals to transform one's total identity into an identity lower than the group's scheme. Garfinkel's short story titled "Color Trouble" is said to demonstrate the status degradation ceremony of a young Black woman. Garfinkel wrote the short story to discuss the African American experience in society during his time. The story moves through the conditions of a successful degradation ceremony of a Black woman who was treated unfairly while on a bus in the state of Virginia. 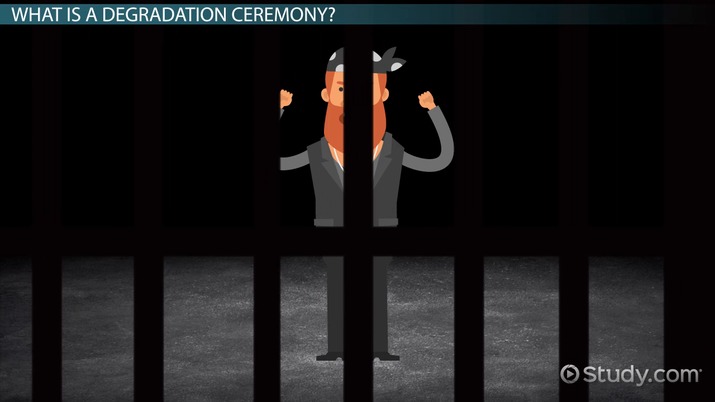 Coming up next: Enculturation: Definition & Examples

The purpose of a degradation ceremony is to transform one's total identity to that of a lower status. This process is typically used to make an individual accept external control and reinforce social norms. The publicization of the degradation ceremony offers a platform for the denouncer to speak of the perpetrator's transgressions and the impact it has had on the community. It also allows the larger community to bear witness to (sometimes participate in) the accusations, criticisms, punishment, and ostracization of the perpetrator. "Perp walks," the parading of an arrested or accused person passed a large group, typically consisting of media personnel, is an example of a degradation ceremony. Perp walks serve the purpose of bringing attention to the perpetrator's alleged crime and stressing the consequences of not following societal expectations.

Garfinkel believed that degradation ceremonies exist in some form universally. Below are a few degradation examples to provide a deeper understanding of the purpose and how it is used.

Components of a Degradation Ceremony

Group Must Believe the Authority Figure Speaks for Them

The third component of a successful degradation ceremony is the group must believe the authority figure speaks for them. Both a judge and persecutor are seen in the public eye as representatives of law and order and on the side of the people. Witnesses will be more willing to believe the proclamations of a transgression from the judge and persecutor. In other situations, the students in a classroom will look to the teacher or principal for direction due to their status in an educational setting. The students will also likely believe the teacher or principal proclamations of a transgression since they are seen as leaders in the environment. The witnesses' belief that the authority figure (denouncer) is a representative of the community is an important component of a degradation ceremony. Witnesses must be made to believe the denouncer and themselves are alike. By making the witnesses believe they are in community with the denouncer, the denouncer can easily make the perpetrator the "outsider" of the group. Witnesses will follow suit to ostracize the perpetrator and see them and their actions as "out of the ordinary."

Perpetrator Must Be Criticized or Punished in Public

The fourth component of a successful degradation ceremony is the perpetrator must be criticized or punished in public. The purpose of a degradation ceremony is to transform one's total identity to that of an identity with a lower status in the community, and the fourth component begins that process. Alfred Dreyfus, a captain in the French Army, was paraded in front of his fellow officers bare of his military decorations while another officer broke his sword in half after being accused of passing intelligence to the German army. During his court trial, Dreyfus was publicly charged with espionage and treason and labeled as a traitor of France. The public criticism and punishment of a perpetrator is an important component as it justifies creating a distance between the community and the individual. The public affair also serves to reinforce the societal expectations of the group while demonstrating the potential consequences of not abiding by said expectations.

Perpetrator Must Be Ejected from the Group

Lastly, the final component of a successful degradation ceremony is the perpetrator must be ejected from the group. The ejection from the group is possible in many ways, such as sentencing the perpetrator to prison, discharging them from the military, or suspending them from an educational setting. Since the individual's status is lowered as they are no longer seen as a member of the community and, in some instances, no longer allowed to enter the environment. After Dreyfus was convicted of espionage and treason, he was sentenced to life in prison at Devil's Island. Not only was Dreyfus's military status lowered, but his status in the French community was also lowered. Dreyfus was removed from the military and community (ejected from the group) by being sentenced to life in prison. By following the earlier components, the denouncer and witnesses can see the transgressions by the perpetrator as violating societal norms, thus justifying the lowering of their status within the group.

In 1956, sociologist Harold Garfinkel introduced the term degradation ceremony to describe the formal or informal transformation of one's total identity to that of an identity with a lower status in a hierarchy. The term was mentioned in his article "Conditions of Successful Degradation Ceremonies." Garfinkel identified five important conditions that must be met to consider a degradation ceremony successful:

Examples of degradation ceremonies in society are perp walks, cashiering in the military, court trials, and prison inductions. The purpose of the degradation ceremony is to make the perpetrator accept external control, enforce societal expectations, and display the consequences of not abiding by said expectations. A famous example of a degradation ceremony is of Alfred Dreyfus who was a high-ranking officer in the French army. Dreyfus was accused of being a traitor. As a result of his alleged transgression, he was paraded in front of his fellow officers bare of his military decorations and had his sword broken in half (stripped of high-ranking military identity). Dreyfus was eventually tried and sentenced to life in prison at Devil's Island for his transgression (ejecting him from the military group and French community).

How does the degradation ceremony work?

Which theory is the degradation ceremony associated with?

What does the term "degradation ceremony" mean?

The term "degradation ceremony" refers to the process of transforming one's total identity to an identity that is lower in status and ejecting the individual from the group. Coined by sociologist Harold Garfinkel, degradation ceremonies are said to be a universal practice.

What is the ultimate status degradation ceremony?

The ultimate and most detrimental status of the degradation ceremony is a perp walk. A perp walk is a public arrest or accusation performed in front of an audience (media). Perp walks have been under public scrutiny as the alleged parties have been exonerated or found to be guilty. Due to the awareness the case received after the initial walk, lasting effects of a perp walk can include defamation of character, lack of privacy, public distrust, and the development of mental health struggles caused by the negative attention.

What are examples of a degradation ceremony?

A couple of examples of a degradation ceremony are court trials and cashiering in the military. Both ceremonies meet the conditions of a successful degradation ceremony by publicly announcing the transgression, having an authority figure proclaim the transgression, making the witness believe the authority figure represents the group, publicly criticizing the perpetrator, and eventually ejecting the perpetrator from the group.

Fahrenheit 451's Society Compared to Ours

What is Cultural Amalgamation?