Copyright
Mary Deering
This lesson will describe what democracy is, where it began and how it has evolved, and the different types of democracies and how they differ from one another. Updated: 07/14/2021

Democracy is a form of government and it is derived from two Greek words: demos (which means "people") and kratos (which means "power". In general terms, the word means "ruled by the people". It is a type of government in which everyone has the right to choose who represents them officially in government, as well as the right to decide on different laws that are proposed by the government. What makes a democracy unique is that each citizen has a right to propose and create laws. Unlike other forms of government where laws are mandated, democratic citizens have a say in these decisions and can exercise their rights openly and freely.

There are two common types of democracy:

The key difference between the two is the person voting on the laws - the citizens, or the elected representatives. 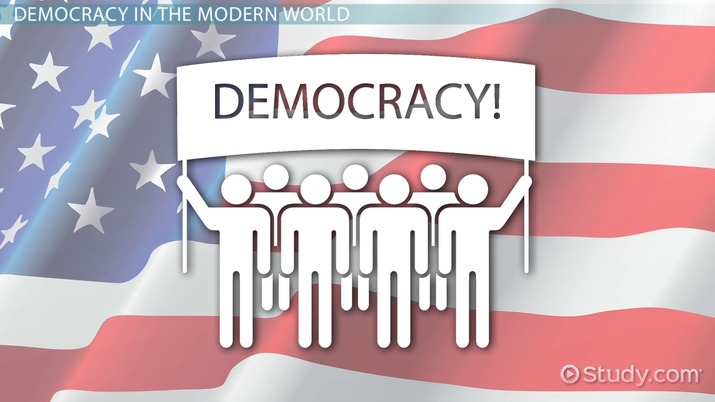 Coming up next: Religion: Key Concepts and Definitions

Democracy is not a new concept. It has been around for quite a long time. Democracy has, however, evolved since its origins.

Democracy originated in 508 BCE in Athens, Greece. At that time, the ruling government was the polis, or city-state. Each polis had its own rules and government. All men born in Greece were allowed to vote in their city-state. There were no representatives and each man voted in person. This government was a direct democracy because citizens voted for the laws themselves. In fact, voting was mandatory if a man was of age.

While each city-state was independent, many opted to work together to keep their country free from invaders. Unfortunately, it was not always outside invaders that caused trouble. Many city-states found themselves in direct opposition to one another. Each city-state was unique and no one wanted to give away their power. They fought over resources and food, as well as who had the greatest authority. This was the flaw in their democracy: every city-state acted with their own best interests and not necessarily the best interests of the country. There was no one official representative to ensure the country worked together as a whole.

Democracy has evolved a lot from its Greek origins. Nowadays, both women and men can vote. While voting is not mandatory, it is strongly encouraged. In most Western democracies, citizens vote for representatives to act on their behalf and take time to choose candidates who they feel will do the best job of representing them and our interests.

Voting is a major event in the United States. On voting day, people go to a public location and cast their votes for their chosen representative. Others mail in their votes if they are unable to attend in person. The candidates with the highest number of votes become the official representatives for that district, state, or even the country. While people choose the candidates they feel will best represent them, this is not always the case. The good news is that when election time comes again, they can change their representatives.

In a representative democracy, the role of the representative is to make and enforce laws and regulations that are important to the people who elected them. Their duty is to ensure the people have an actual say in the government. Voters are free to contact their representatives and propose changes to policies or even constitutional changes. In addition, they are free to participate in referendums where they as voters can directly vote for law changes. Referendums are great examples of direct democracies because the voters cast their own votes and can vote for or against legal changes.

A democracy is a type of government in which everyone has the right to choose who represents them officially in government, as well as the right to decide on different laws that are proposed by the government. There are two types of democracy:

The first democracy in Athens, Greece, was a direct democracy where the citizens voted on laws. Modern democracies tend to be representative democracies.

Regardless of the type of democracy, their main role is to ensure that citizens have a voice in government and that democracy remains "ruled by the people".

What is the best definition of democracy?

What are the 3 types of democracy?

What is Sovereignty? - Definition & Meaning

What is a Village Panchayat?

Democratic Countries in the World

Landform Types & Examples | What is a Landform?