What is the Definition of Descriptive Writing?

Descriptive writing is writing in which the author's intent is to create a vivid image of what he/she is describing in the mind of the reader. It relies on the author using detailed descriptions that convey the sensory details of what he/she is describing, often with the use of specific techniques. Descriptive writing uses vivid language to create the overall effect that the reader is present in the story.

See how the author attempts to paint a picture through each of the following descriptions. 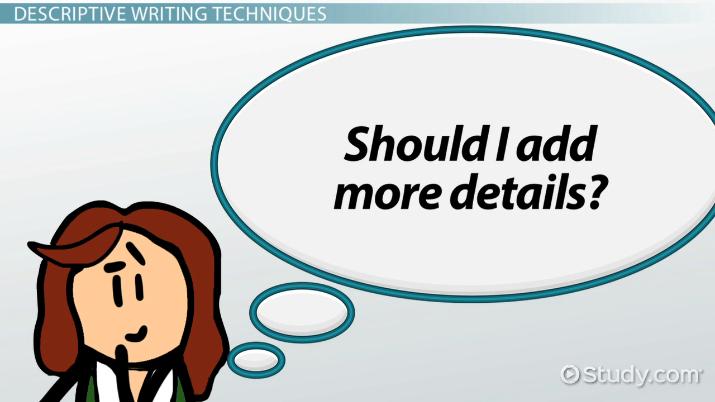 Try it now
Back
Coming up next: Passive Voice: Form & Examples

When trying to write descriptively, authors should make sure to re-read and re-write. Re-read for places where the wording can be changed or elaborated upon to create a more detailed image for the reader, and re-write those sections using some of the above examples or other forms of descriptive writing. Authors should also be intentional when choosing the words/phrases to focus on, as these will be the areas that focus readers' interest.

This lesson explained to you how descriptive writing can change a short, under-developed piece of writing into a detailed and descriptive masterpiece. Use the following activities to practice your new skills.

One of the most useful things that writers can do is to read a lot. This will expose them to various writing styles and help them develop their own voice. Take a look at some of the books that you've read recently. See if you can find a descriptive passage in one or more of them. Read the passage carefully. Which senses does the passage evoke? Does the author make you feel like you're really in the scene, experiencing the action with the protagonists?

Examples of books with strong descriptive passages: The Hunger Games by Suzanne Collins; Jane Eyre by Charlotte Brontë; The Great Gatsby by F. Scott Fitzgerald; The Curious Incident of the Dog in the Night-Time by Mark Haddon.

Just like the example given in this lesson, this activity will give you the opportunity to tell a story in two ways. Think of something interesting that happened to you recently, or make up a new story from scratch. First, write the story with as few details as possible, just the bare bone facts. Read the story back and think about how it would sound to someone who didn't experience the real thing. Now, rewrite the story using lots and lots of detail. Think about all five senses as you write. Include metaphors, similes, and other figurative language in your writing. Read the second version back and see the improvement! Don't forget to reread and edit your work to make it as good as it can be.

What is descriptive type of writing?

Descriptive writing is writing in which the author uses vivid language and detailed description to create an image in the mind of the reader.

How do you start descriptive writing?

Take your original piece of writing and add sensory details to help the reader visualize the details of your piece.

What is an example of descriptive writing?

An example of descriptive writing is the use of metaphor and simile. Metaphor: My sister is a thunderstorm. Simile: My sister's voice is like a crash of lightening.

How to Write a Descriptive Paragraph or Essay: Lesson for Kids

The Importance of Using Precise Language in Writing