Social deviance refers to a behavior that is found offensive and unacceptable in a social group. Social deviance can be formal, where individuals break laws and guidelines of land or informal, where an individual is just deviant from unwritten norms. The concept of social deviance has been present in most societies where different customs and standards are maintained.

Social deviance can be minor, like speeding or not giving a child a middle name. Consequently, it can be a significant criminal act like murder or theft. It is also vital to indicate that social deviance is not necessarily a negative act. An act like overachievement in school can be considered as social deviance but a positive one. 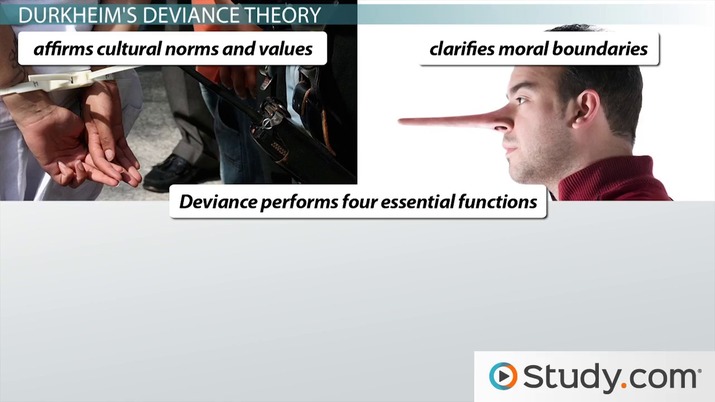 Coming up next: Labeling Theory and Crime: Stigma & Retrospective and Projective Labeling

As aforementioned, there are two types of deviance, formal and informal deviances.

There are different theories of deviance that are present. These theories use social conditions, situations, and pressures to explain social deviance. Emile Durkheim and Robert Merton are major theorists known for their contribution to social deviance.

Emile Durkheim established that deviance is a characteristic of a society that is difficult to avoid. Durkheim also indicated that deviance is a critical aspect in society that calls for change and innovation. According to him, people need to deviate from social norms for changes to occur in communities. Though he advocated for incremental change, Durkheim was confident that social change resulted from society positively responding to deviant conduct. Besides, to Durkheim, the positive response was a way for societies to amend the law to accommodate more individuals further.

Durkheim was the theorist that established that deviance varied from one society to another, and all cultures have a form of deviance in them. Durkheim also indicated that there are four vital functions of deviant behavior in society. These functions are:

In his Strain theory of deviance, Merton indicated that crime exists due to a lack of opportunities for people to succeed in society. Merton then established that the strain between goals and reaching these goals made some individuals turn to crime. Merton first introduced this theory in 1940 to explain rising crime rates in America.

Strain theory, also known as anomie theory, depicted that the goals individuals wanted to achieve were identified by society as vital. Therefore, when people are blocked from achieving these goals, they develop a state of anomie or lack of ethical standards. Merton also came up with a typology based on an individual's adherence to cultural goals and an individual's belief in reaching his goals. Further in this criteria, Merton established several types of deviance: rebellion, innovation, conformity, ritualism, and retreatism.

In his explanation of his theory, Merton used the American Dream. The American Dream involved the assurance of Americans that there was an equal opportunity for all Americans regardless of their social status. However, the dream was not actualized, and it led to some individuals trying to meet the goal by conforming to deviant behavior like robbery. The American Dream is a classic example of how the strain theory works.

Social norms are critical in societies as they give order to groups of people. The norms guide behaviors in societies and assist in understanding actions done by people. Therefore, norms lead to social stability. Social norms are one of the functionalist theory's roles since they provide social stability by determining and punishing deviant behaviors.

An example of the structural functionalist theory is how it explains the evils of crime. A crime like robbery is defined as wrong and inappropriate in society; hence individuals should avoid it. This explanation assists in creating social stability by informing individuals of the dangers of robbery.

Social deviance depicts offensive or unacceptable behavior in society. Social deviance can be positive and not necessarily harmful to society. There are two types of deviance, and they involve formal (crime) and informal (deviance from social norms) deviant behavior. Different theories explain deviance, but the most prominent came from Emile Durkheim and Robert Merton. Durkheim indicated that deviance is imperative in society and it is vital for its change. Merton established that the identified goals in society are the ones that make individuals fall into crime.

In the lesson, you read that deviance is not a term that only applies to criminal behavior, but also a term that applies to behavior outside of the norm. Think of an instance in your own life where you might be considered to have engaged in deviant behavior. For example, a teenage boy may be in a ballet class full of girls. There is nothing wrong with this, certainly, but it is outside of the norm and as such is considered deviant in today's society. Write a reflective journal entry on a behavior of yours that is outside the norm, thus technically considered deviant.

Deviant behavior can be beneficial in that it can lead to necessary and important social change. Think of three behaviors over the last century that would once have been considered deviant but today are considered normative. For example, a woman exercising at a gym used to be deviant. Gyms were for men with big muscles who grunted. However, more and more women joined gyms, and it is no longer considered nonnormative, or deviant, for a woman to belong to a gym. Indeed, this has ushered in beneficial social change as our population has become more health conscious and aware of the benefits of exercise. In two to three paragraphs, describe three behaviors that were once considered deviant but are now considered typical.

What are the three theories of deviance?

What is an example of social deviance?

Social deviance can be as serious as crimes like murder, rape and robbery (fomral deviance) to actions such as belching loudly in public, peeping through another person's email or phone messages and removing dirt from teeth in public(informal deviance).

What are the main causes of social deviance?

What is meant by social deviance?

Social deviance can be defined as any behavior that a society finds offensive. Such behavior can cause condemnation, disapproval, hostility and punishment. The social groups or society in general does not accept the behavior and those who commit any such actions face the wrath of societal judgement.

Create an account
Deviance Theories & Types | What is Deviance in Sociology?
Start today. Try it now
Sociology 101: Intro to Sociology

Project Management: Elements of a Project

Survey Study in Psychology Concept & Design | What is a Survey Study?

Deviant Behavior Overview, Types & Examples | What is Deviance in Society?

The Role of Visuals in Technical Instructions