Copyright
Daniel Cole, Joshua Sipper
Learn about Discourses on Livy by Niccolo Machiavelli. Review a summary and analysis of the work and discover major quotes from Machiavelli's Discourses. Updated: 01/25/2022

Niccolo Machiavelli was a Florentine political theorist often associated with the Italian Renaissance. He authored two famous works, The Prince and the Discourses on Livy. While The Prince focuses on states that are ruled by a prince, Discourses focuses on republics. Republican governments involve divided government powers and freedom of speech for its citizens. The full title of the latter work is Discourses on the First Ten Books of Titus Livy and took a long period to write, starting in roughly 1514 and lasting until roughly 1519. It was only published after Machiavelli's death in 1531.

While Machiavelli's Discourses on Livy frames itself as a commentary on Titus Livy's history of Rome, its substance is concerned more with presenting Machiavelli's own thoughts on republican government. In it, Machiavelli touches on security and liberty as proper ends of government, the tension between the people and the nobility, and offers appraisals both of ancient Rome and the kingdom of France in his day. 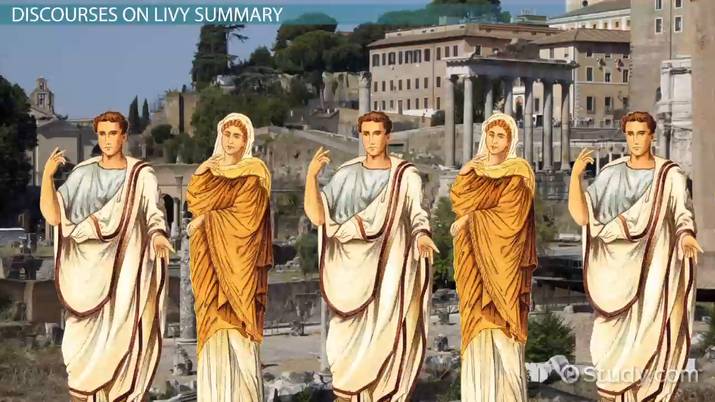 Coming up next: The Rise of the Vernacular and the Decline of Latin

Any Machiavelli Discourses summary will necessarily be incomplete. Machiavelli's writing covers many highly varied topics. Nevertheless, some of the main themes and larger topics can be pulled from each of the Discourses' three books.

The first book of the Discourses focuses on ancient Rome and the establishment and preservation of republics. Among Machiavelli's concerns is the role of a leader in establishing a republic. Machiavelli notes that people tend to be selfish and have privacy concerns. A great leader, such as Rome's Romulus, can nevertheless institute a government that serves the public interest. Commenting on Livy, Machiavelli observes that a people, when it is united, is stronger and wiser than a prince.

He devotes a significant portion of time to examining changes in government as well as to the people, and his primary concerns are governments switching between monarchies and republics and people switching between virtue and corruption. He notes that a republic, in times of crisis, can become a monarchy and switch back to a republic provided that the people remain uncorrupted. Machiavelli's claims here stem from his analysis of the kings of Rome, including Romulus, Numa, and Tullus. Interestingly, while Machiavelli is advancing a version republicanism, his notion is compatible with at least temporary dictatorships.

The second book of the Discourses focuses on the external relations of a republic, including waging wars, expanding the state, and achieving political friendship. In a discussion similar to one that occurs in The Prince, Machiavelli remarks that it is better to have armed forces constituted by the citizens of a state instead of relying on mercenaries. Mercenaries only fight for money and consequently are not as reliable or steadfast as those who are fighting for their own freedom. Machiavelli also offers commentary on the structure and efficacy of the Roman military and analyzes the sources of their success.

While ancient Rome was able to engage in alliances and diplomacy more generally, Machiavelli gives special attention to their military. He insists that their excellence in winning battles contributed to the overall might of Rome, helping to give security to the republic and its citizens.

The third book focuses on the conditions that promote the death and renewal of a republic. In times of crisis or great change, strong leaders who can guide the people back to their virtuous ways are necessary. Machiavelli devotes extensive attention to such prominent Roman leaders and citizens who successfully maintained the Roman republic (as well as Republican leaders who have failed). Among Machiavelli's discussions is the topic of conspiracies, how it is imperative they be prevented, and how best to end them.

Notably, Machiavelli claims that a republic will crumble if it ever strays from its goodness. He thus ties the survival of a republic to the founding principles that make it great in the first place, e.g., the greatness of Rome imparted by Romulus. Machiavelli, perhaps unintuitively, credits any event that drives the people back to its original goodness. For example, when the Gauls sacked Rome in 387 BCE, the Romans suffered a beating that encouraged them to recapture some of their earlier virtue. Thus, Machiavelli treats military defeat as a kind of punishment that acts as an impetus for again becoming great.

Analysis of Discourses on Livy

In Machiavelli's Discourses on Livy, he adheres to a republican philosophy, meaning he advances the view that a republican form of government is the best form of government. He takes the government of ancient Rome as his exemplar for a good republican government. Nevertheless, monarchies can be effective and relatively secure provided they have the proper aim. Republics can successfully aim at freedom, while monarchies can only aim at security. Machiavelli's thoughts on monarchy are illustrated by his analyses of the kingdom of France.

A monarchy can achieve internal security by disarming its population, and this allows the prince to prevent emerging threats to his power. However, this will make it difficult (and expensive) to organize the defense of a monarchy, meaning it is harder for a monarchy to maintain external security against invaders or foreign powers.

While an armed population may make civil war possible and possibly promote internal instability, Machiavelli thinks republics can mitigate this threat. By promoting freedoms, such as freedom of speech, and fostering civic virtue and love of one's country, republics can achieve their own internal security. Moreover, virtuous citizens who are armed can be readily called upon to defend their country.

Niccolo Machiavelli was a Florentine political theorist who authored the Discourses on Livy in the early sixteenth century. In it, he concerns himself with what makes a republic government stable and great by studying ancient Rome. A republican government involves decentralized, balanced powers and free speech for its citizens. For Machiavelli, the freedom and liberty of a republic are responsible for maintaining its internal security. If a republic can promote and maintain the virtues of its citizens, the citizens can remain armed and protect their city from foreign powers, thus achieving external security. Moreover, a republic with free speech is strengthened by disagreements. Thus, Machiavelli saw the tension between the Roman Senate and the people as productive since it resolved issues and generated laws that promoted Roman virtues. While modern states do not resemble the republican city-states that Machiavelli was concerned with, his remarks on security are nevertheless transferable to contemporary political inquiries.

Why did Machiavelli write Discourses on Livy?

Machiavelli's Discourses on Livy, while presented as a commentary on Livy's history of Rome, is designed to present Machiavelli's thoughts on republican government. Moreover, Machiavelli uses the book to laud the actions of the ancient Romans while being critical of some of their philosophy, which at the time was celebrated by his contemporaries.

When did Machiavelli write Discourses on Livy?

Machiavelli's work on Discourses on Livy started as early as 1514 and concluded as late as 1519. The work was not published until after he died in 1531.

Discourse on the Method by Rene Descartes | Summary & Analysis

The Praise of Folly By Erasmus | Summary & Analysis

Cicero and the Renaissance: Philosophies & Influence

The Subjection of Women by John Stuart Mill | Summary & Analysis