Andrea Taktak, Elizabeth Friedl
Learn about DNA fingerprinting, including the steps involved. Understand why DNA fingerprinting is more conclusive when proving innocence and examples of its use. Updated: 12/30/2021

Every human being has a unique set of fingerprints which can be used for identification. Historically, this was especially helpful when attempting to solve a crime. Fingerprints detected at the crime scene would be compared and hopefully matched to criminals in a fingerprint database. After the discovery of DNA and along with advances in technology, another method of identification besides fingerprinting was developed called DNA fingerprinting. DNA Fingerprinting can be defined as a method of using DNA to create a unique genetic pattern for every person. For example, if any cells are left behind at a crime scene, DNA can be obtained from those cells and put through a series of steps that will ultimately create a unique pattern for that individual. This unique pattern is what is referred to as the DNA fingerprint. Like traditional fingerprinting, this DNA fingerprint is then compared to a known sample to see if there is a match.

DNA can be taken from any cell in the body, including liquid tissue such as blood. DNA is often left behind in small amounts at a crime scene, unbeknownst to the criminal. DNA can also be collected from hair follicles if hair has been forcibly removed, from skin cells or saliva left on a cigarette butt, or from fingernail scrapings of a victim.

A great early example of the use of DNA fingerprinting to prove innocence is the case of Kirk Bloodsworth, charged with child rape and murder in 1985 and put on death row. Bloodsworth adamantly maintained that he was innocent, claiming he was charged based on faulty eyewitness testimony. In 1993, Bloodsworth was exonerated by DNA fingerprinting because the drops of semen that were left behind at the scene did not match his DNA. Many other wrongfully convicted persons have been freed based on DNA evidence, which is largely attributed to the Innocence Project that was founded in 1992.

How are DNA Profiles Stored?

DNA profiles, also called DNA types, are created through the process of gel electrophoresis. Once created, these profiles are photographed and then stored in national databases. In 1994, congress passed the DNA Identification Act which gave the FBI permission to begin storing profiles of criminals (starting with sex offenders) in a database. This database is called the National DNA Index System (NDIS) and has expanded to include all types of criminals and suspects. This is particularly helpful to law enforcement agencies if a suspect crosses state lines. 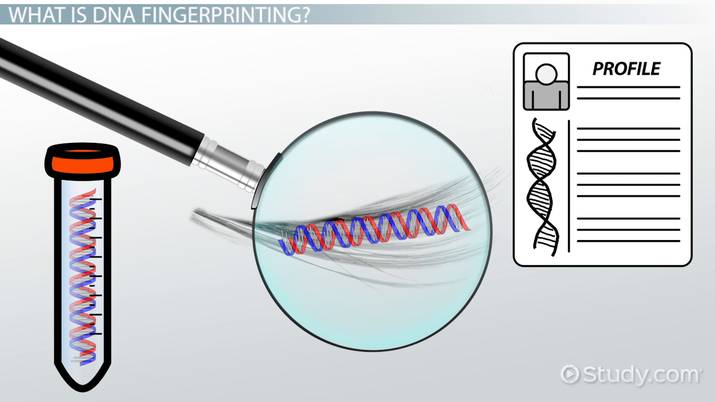 Coming up next: Ethical and Safety Concerns for DNA Technology

A very small amount of DNA is needed to create a DNA fingerprint. The following steps explain this process:

Step 1 (DNA Extraction): DNA is isolated from the cells containing it through a process called DNA extraction. During this process, the cell membrane and nuclear membrane will be chemically broken down to allow the DNA to flow out. Additional chemical reactions are performed to isolate and purify the DNA to get it ready for the next step.

Step 2 (PCR): Once the DNA is extracted, it is put through a process known as a Polymerase Chain Reaction (PCR). In this process, the DNA sample is copied many times over until there is an amount that is sufficient to create the DNA fingerprint.

Step 3 (Restriction Enzyme Treatment): The copies of DNA will be cut up or digested using special molecular scissors known as restriction enzymes. These enzymes will cut DNA at specific genetic sequences. Because each person has unique DNA, the places that the restriction enzymes cut will be unique to each person. This will create fragments of DNA that are different sizes. Each person will have fragments of different lengths. These fragments are given the name of Short Tandem Repeats (STRs), referred to as such because most of our DNA is made up of non-coding areas that have repeating sequences. These regions are typically where the restriction enzymes will make their cuts.

Step 4 (Gel Electrophoresis): The digested DNA samples are loaded into wells that are formed in a special gelatin called an agarose gel. This porous gel has the consistency of Jell-O, allowing the DNA fragments to move through openings in it. An electric current is applied to the gel to move the DNA fragments through. Because DNA has a negative charge to it, the side of the gel where the DNA is loaded will have a negative charge applied to it. The opposite side of the gel will have a positive charge applied. The negatively charged DNA will be pulled toward the positive side of the gel through the pores. The larger fragments of DNA will not travel as far and will stay closer to the wells while the smaller fragments will travel further. The DNA fragments will separate out over a period of time based on their size, creating the unique pattern referred to as the DNA fingerprint.

DNA fingerprinting is a technique that involves isolating and extracting DNA from cells, amplifying it through PCR, and running it through gel electrophoresis. Restriction enzymes are used to cut the DNA into fragments of different sizes that are called short tandem repeats or STRs. These different sized fragments will move through the gel when electricity is applied, and they will separate out by size. This causes a pattern which will be unique for every person and this is what is referred to as the DNA fingerprint.

DNA fingerprinting is also known as DNA profiling. A DNA profile can be used to determine if a suspect was at a crime scene but is more often used to exonerate suspects if the DNA fingerprint does not match crime scene samples. DNA profiles, also called DNA types, are saved in national databases like the National DNA Index System (NDIS). Additional uses of DNA profiling include paternity testing, inheritance cases, determining ancestry, identifying unknown human remains, and even in species comparisons.

What are the four steps of DNA fingerprinting?

Step 3: Restriction enzyme treatment to cut the DNA at specific sequences, resulting in fragments that are unique in size to each person.

Step 4: Gel electrophoresis to separate these DNA fragments by size for comparison.

What is DNA fingerprinting and what is it used for?

DNA fingerprinting is a technique that involves creating a unique pattern of DNA from a crime scene sample and comparing it to potential suspects. DNA fingerprinting began with forensic uses but has more recently been used to determine paternity and ancestry, identify human remains, and compare two species to detect genetic similarities.