What Is Domestic Violence?

In 1993, legislation was passed known as the Violence Against Women Act which had the purpose of helping law enforcement officers aid in domestic abuse calls as well as establishing protocols that help to keep domestic violence survivors safe. The month of October is referred to as Domestic Violence month to help raise awareness for survivors of domestic abuse. The color associated with domestic violence awareness and support is purple.

While it is difficult to pinpoint the causes of domestic violence, certain risk factors increase the likelihood that an individual would engage in this type of unsavory behavior. Risk factors that increase one's chances of domestically abusing another include lack of stable employment, alcohol use, witnessing domestic abuse in childhood, previous traumatic experiences, being a parent before the age of 21, low self-esteem, substance abuse, and male-dominant and hierarchical belief systems. While these factors do not always mean an individual will be abusive, it does accompany a higher risk that an individual with these characteristics is more likely to domestically abuse another person.

There are many signs of someone experiencing domestic violence, which may include, but are not limited to: 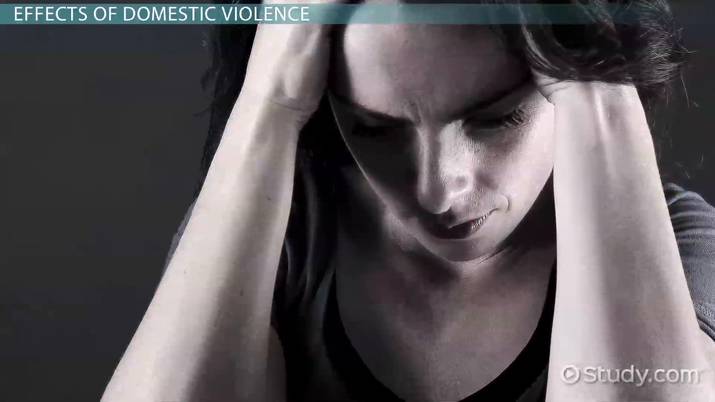 Coming up next: HPA Axis and Stress: Function & Definition

Domestic violence also accounts for close to six billion dollars spent on health care costs annually. Many who face domestic violence suffer effects including a loss of housing or income. Additionally, domestic violence is positively correlated with premature births. This puts children at risk for cognitive and mental health issues, as well as the potential of being victims of abuse themselves. Other issues that are relevant to domestic abuse in juveniles include distrust of authority figures, relationship attachment issues, nightmares, bedwetting, academic difficulties, and substance abuse issues.

Michelle and Julie are two women who are in a romantic relationship together and have been living together for approximately eight years. Julie looks through Michelle's phone and limits who is she can spend time with without Julie present. Julie utilizes threats of physical violence and coercion in order to attain desired behaviors from Michelle, such as having all meals prepared in the home and the house clean when Julie gets home from work. Michelle is dependent on Julie and is disabled, thus has no means of finding gainful employment. The dynamic shared by Julie and Michelle is an example of domestic violence, as Michelle is experiencing technological, psychological, and financial abuse.

Marcus and Winona have been dating since freshmen year in high school and will be graduating next week. Winona is scheduled to start classes at a local public university and commute from her town to school daily while Marcus had been accepted to a prestigious private school that is three states away. Winona is insecure and believes that if she and Marcus attend different colleges he will leave her. Recently, she argued with him about his decision to leave the state and ended up slapping him in the face. Marcus is now considered a victim of domestic violence, as he has experienced physical abuse at the hands of his partner, Winona.

Ernest and Amelia have been married for three months, and Amelia has two children, Michael and Mariah, from a previous marriage. Since the wedding, Ernest has been treating Mariah and Michael differently and has begun to discipline them physically and left bruises on both children. Ernest also uses threats and intimidation when he wants the children to do chores or homework. Michael and Mariah are considered victims of domestic abuse, specifically psychological and physical violence.

While people of all gender identities and sexual orientations may experience domestic violence, 1.3 million women per year are found to be victims of this type of abuse. October is Domestic Violence Awareness month and the color used to signify intimate partner violence is purple. While there is no cause for why some people use domestic violence, it is often associated with consumption of alcohol, previous trauma, or the abuser witnessing domestic abuse in his or her childhood. In 1993, legislation was adopted to help victims of domestic abuse known as the Violence Against Women Act. Around 24% of people who experience domestic abuse develop post-traumatic stress disorder (PTSD). Children who experience or witness domestic violence often develop issues with: lack of trust in authority, bedwetting, nightmares, substance abuse, problems in school, and attachment problems in relationships.

What can be classified as domestic abuse?

What is domestic violence in simple words?

Domestic violence, simply put, is behavior used to exert power or control over an intimate partner. Domestic violence may include physical, sexual, emotional, financial, or technological forms of abuse.