Ionic compounds are neutral, though they are made up of cations (positive ions) and anions (negative ions). A double replacement reaction can be defined as a reaction in which one set of ions of the same charge are exchanged and two new products are formed.

Another example showing the charges is:

Other Names for Double Replacement Reactions

Other names for double replacement reactions are:

Double replacement reactions are of three categories. They are:

Precipitation Reaction: Double replacement reactions produce precipitates or insoluble solids as one of the products. These reactions are easy to see and classify. For example, lead(II) chloride dissolves moderately in hot water. Potassium sulfate dissolves readily in water at room temperature. To a solution of lead(II) chloride taken in a test tube, a small quantity of potassium sulfate solution is added and there is an immediate precipitate formation. The reaction can be represented as

Another example of a precipitation reaction is the addition of sodium hydroxide solution to ferrous sulfate solution. Iron(II) hydroxide is produced as a precipitate, with the other product being a sodium chloride solution.

Formation of a molecular compound:

Another form of double replacement reaction is one that gives rise to a molecular compound. Most often, the molecular compound formed is water. So, neutralization reactions are good examples of this type. Neutralization reactions take place between an acid and a base. The essential reaction is between the hydrogen ion of the acid and the hydroxide ion of the base.

The hydroxide ion and the hydrogen ion combine to form water. The other ions, sodium and chloride, remain unchanged. They are spectator ions.

Gas formation: An example of a double replacement reaction that results in a gas is the reaction between a carbonate or a hydrogen carbonate and dilute acids. In both cases, carbon dioxide is released as a gaseous product. 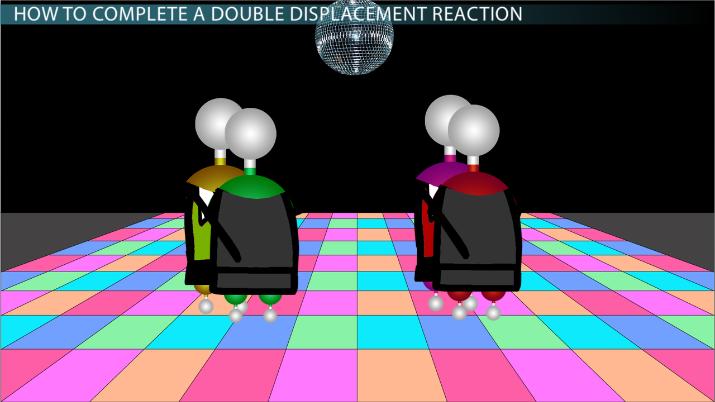 How to Do Double Displacement Reactions.

The following points come into play when doing a double replacement reaction:

The following table lists the solubility of a few compounds. This can aid in determining if the double replacement reaction gives a precipitate.

If one of the reactants is a compound like carbonates, hydrogen carbonates, or sulfide to name a few, and the other is dilute acid, gas is one of the products.

Here are some examples of each kind of double replacement reaction

Example 1: When solutions of sodium sulfate and silver nitrate are mixed, there is an immediate formation of a precipitate. The precipitate is silver sulfate.

Example 2: Potassium hydroxide solution reacts with dilute nitric acid, undergoing a double replacement reaction. The molecular compound, water, is formed as one of the products.

Example 4: The reaction between iron(II) sulfide and dilute hydrochloric acid produces hydrogen sulfide gas. The has a characteristic rotten egg smell. This reaction is also an example of metathesis where a gas is evolved.

To do a double replacement reaction:

For obtaining information about the physical state of the chemicals, the table given can be used.

Double displacement reactions occur when two aqueous solutions react to form either water, a solid (insoluble compound) or a gas and an aqueous solution. Let's work on predicting and balancing the reactions.

Write the balanced chemical reaction for each scenario, which includes predicting the products of the reaction.

Notice that in each of these reactions, they're balanced for mass. Reactions 1-4 produce a precipitate, while reaction 5 produces water.

What is double displacement reaction with example?

A double displacement reaction takes place between two ionic compounds. Ions are exchanged between them. Only ions of the same charge are exchanged.

What is double displacement formula?

There is a general formula for representing double displacement reactions.

What are the 3 types of double displacement reactions?

The three types of double replacement reactions are

The Activity Series of Metals | Predicting Products of Chemical Reactions