Ian Matthews, Beth Hendricks, Jenna Clayton
Explore the poem “Dreams” by Langston Hughes. Read the text of “Dreams” and study a summary and analysis of Hughes’s poem. Understand possible themes of “Dreams," the purpose of its figurative language, and its opening line, "Hold fast to dreams." Updated: 09/28/2021

Published in the May 1923 issue of a magazine called The World Tomorrow, "Dreams" by Langston Hughes is a short poem of 8 lines with simple imagery but a strong message. Like many Langston Hughes poems, "Dreams" encourages the reader to hold on to their dreams and explains why it's so important to do so. Hughes, one of the most famous poets of American literature's Harlem Renaissance and the first African-American to make a living as a writer and speaker, explored the theme of dreams in much of his work. "Dreams" is a perfect example. Read the full text of the poem before moving on to some analysis of the themes and devices Hughes uses.

For if dreams die

Life is a broken-winged bird

For when dreams go

Life is a barren field 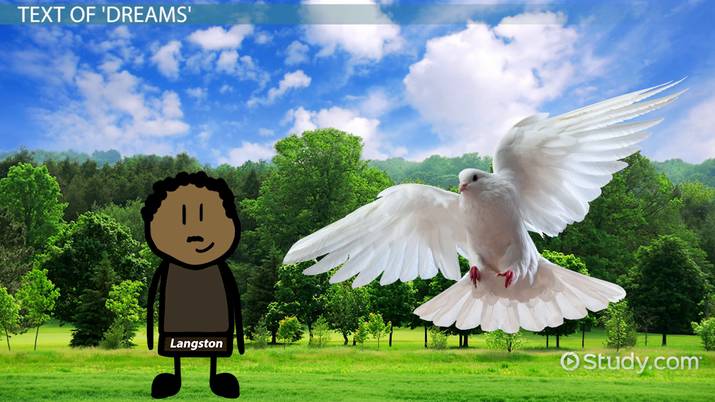 Coming up next: Theme for English B Lesson Plan

"Dreams" by Langston Hughes is very short: just two quatrains (a stanza of four lines) for a total of eight lines. In both quatrains, Hughes repeats his main message: "Hold fast to dreams." By "dreams," Hughes means bigger goals, aspirations, and hopes for a person's life rather than dreams at night. After the repeated line, each quatrain includes an image to show what life is like without dreams. In the first, life without dreams is a "broken-winged bird that cannot fly." In the second, life without dreams is "a barren field frozen with snow." The poem's simplicity, brevity, and straightforwardness underscore the message and make it all the more clear.

In his poem "Dreams," Langston Hughes uses several poetic devices. Langston Hughes' poems, including Dreams, frequently use specific styles to mimic everyday speech; he uses common imagery and metaphor that are easy to understand, and repetition drives the point home. Read on for some analysis of these devices in "Dreams" by Langston Hughes.

The style and format of "Dreams" reach a broad audience. Because it's so short, it's easy to remember; as a result, the message comes to the forefront and practically anyone who can read can understand it. The poem's brevity also implies a sense of urgency. Holding on to dreams is so important that there's no time for more developed or elaborate imagery, or even more than eight lines.

"Dreams" also follows a simple rhyme scheme: ABCB DEFE. The second and fourth lines of each quatrain rhyme. This has a couple of effects:

These two elements - rhyme and brevity - make the poem an urgent, focused exhortation to hold fast to dreams.

Even in such a short poem as "Dreams," Langston Hughes creates some striking imagery. The two major images at play in "Dreams" are:

These images aren't complicated; they're powerful in their simplicity. Since they're so easy to understand, the broken-winged bird and the barren field make the message of the poem more urgent when they're deployed as metaphors.

A metaphor is a comparison between two things without using "like" or "as." (A comparison that uses "like" or "as" is a simile). In "Dreams," Langston Hughes develops his central metaphor in two ways. He compares life without dreams to a broken-winged bird that cannot fly and to a barren field frozen with snow. Since the images are so plain and concrete, the metaphor is clear: life without dreams is no good. This makes the message of the whole poem clear as day: hold on to your dreams, because without them, life is meaningless.

Hughes repeats the line "Hold fast to dreams" at the beginning of each quatrain of "Dreams." Repetition in poetry can be used for a few different purposes:

In "Dreams," Hughes repeats "Hold fast to dreams" to draw greater attention to the idea, as it's the main message of the poem. It's what he wants the reader to take away after they've read the poem, a thesis statement of sorts. Then the imagery, metaphor, and other poetic devices are the evidence to support his repeated "argument."

Putting it all together now, a clear picture of the "Dreams" by Langston Hughes' theme emerges. The repeated line "Hold fast to dreams" is the what, and the imagery and metaphor are the why. The reader should hold fast to their dreams, because without dreams life is motionless, barren, and meaningless.

Though "Dreams" by Langston Hughes is short, its meaning is deep. Read on for some analysis of "Dreams" in theme, audience, and imagery.

The Bird and the Field

The two choices of image that Hughes deploys in "Dreams" are similar, but have different connotations. Consider:

In this image, dreams are what allow the bird to fly; they give life motion and propel the dreamer forward into bigger and better things. Dreams are what help the person fulfill their purpose - just like a bird that can't fly, a person without dreams can't achieve their full potential. According to this first quatrain, a person without dreams is going nowhere and doing nothing.

In this image, dreams are the source of life itself. Similarly to the first quatrain, dreams give life purpose - as a field's purpose is to grow green things, a person's purpose is to fulfill their dreams. Without dreams, there's nothing left in life.

Put the two quatrains together and it's far from a simple repetition of the same meaning. "Dreams" gives a full picture of what happens when a person lets go of their dreams: a motionless existence, devoid of meaning.

Like many of Langston Hughes' poems, "Dreams" is written simply. Its language is straightforward and simple, it's short in length, and its imagery is accessible and everyday. This was an intentional choice on Hughes' part, as he wanted to reach everyday working-class black people and encourage them in their day-to-day life. Hughes himself had a working-class background (he'd worked in many menial jobs before being published as a poet) and he would have known first-hand how draining and soul-crushing the work was. It would have been easy for a person to get lost in the grind and succumb to hopelessness.

Hence the structure and style of "Dreams." The poem's urgency comes through in its brevity, and the plain free-verse writing style makes it easier to understand than a more elaborate form. The message is easy to pick up and tough to ignore, thanks to the starkness of Hughes' imagery.

Langston Hughes was a prominent figure in the Harlem Renaissance, a movement of black writers, speakers, and artists in the 1920s, primarily in the Harlem neighborhood of New York City. This was a time of prosperity for many, but still a time of great racial inequality. Slavery was over, but racism still figured heavily in American culture. Hughes and his fellow Harlem Renaissance writers carved out their cultural space and many, Hughes especially, wrote to encourage other black Americans. However, they knew how much farther there was to go, and "Dreams" is full of hope that society and culture could get to a place of harmony and equality someday. However, if the reader doesn't hold on to their dreams, they never will.

"Dreams" by Langston Hughes is a short poem - just eight lines split into two quatrains. Through this poem, Hughes encourages the reader to pursue their dreams, lest life become meaningless and barren. Hughes uses several notable literary devices in "Dreams," including:

The message of the poem is clear and memorable, even a century after its original publication.

For this activity, you are going to further your understanding of Langston Hughes' popular poem, "Dreams," by completing a critical analysis. Fill out the following information about the poem.

Title: Analyze the title of the poem. Why is it called "Dreams?"

Paraphrase: Translate the poem in your own words. Make sure you explain each line of the poem.

Connotation: Analyze any figurative language in this poem. Pay close attention to Hughes' use of imagery and metaphor.

Attitude/Tone: What is the author's attitude throughout the poem? Use evidence from the poem to support your response.

Shifts: Are there any major changes in the author's attitude? If so, explain.

Title: Reexamine the title. Now that you have critically analyzed the poem, has your interpretation of the title changed? Explain.

Theme: Briefly explain what the subject of the poem is, and then determine the major theme(s) of the poem.

Title: This poem is about the importance of having dreams.

Connotation: Hughes uses two powerful images in his poem. First, he describes a bird with a broken wing. Next, he depicts an empty and cold field. Both of these images act as metaphors comparing a life without dreams to a bird that can't fly and an empty/cold field.

Attitude/Tone: The overall tone is fairly somber due to Hughes' depressing images of a "broken winged-bird" and a "barren field."

Shifts: There is no major shift.

Title: If you let go of your dreams, your life will be sad and hopeless.

Theme: The poem is about holding on to dreams, and the theme is similar. Don't let go of your dreams.

What are the two metaphors in Dreams by Langston Hughes?

What is the meaning of the poem Dreams by Langston Hughes?

The meaning of the poem Dreams by Langston Hughes is simple: don't give up on your big dreams and goals, or life will be broken, motionless, and meaningless.

Why did Langston Hughes write Dreams?

Langston Hughes wrote Dreams to encourage his main audience - working-class black Americans in the 1920s - to hold onto their dreams of a better life and equality. Without those dreams, according to the poem, life is devoid of meaning and purpose.

What does hold fast to dreams mean?

"Hold fast to dreams" means keep pursuing your bigger goals and wishes for life; don't give up on them, or life will be meaningless and purposeless.

I, Too, Sing America by Langston Hughes | Summary, Theme & Analysis

The Lady or the Tiger Themes

Hope is the Thing with Feathers by Emily Dickinson | Analysis, Theme & Summary

How to Establish and Maintain a Formal Writing Style

A Dream Within a Dream by Edgar Allan Poe | Summary, Themes & Analysis

Technology in a Job Interview: Use & Trends