What are Medication Contraindications and Indications?

Have you ever been watching television and a new drug commercial airs, stating under what conditions a drug should or should not be used? These are the drug's indications and contraindications.

An indication in a medical setting is a particular situation that requires a specific treatment or procedure. A drug's indications state the conditions, or symptoms for which the drug is approved. This includes prevention, slowing the progression of a disease, and treatment. For example, amoxicillin is indicated to treat bacterial infections, and metformin, an oral diabetes medication, is used to keep blood sugar levels in the normal range.

Drug indications and contraindications are first determined by the drug's manufacturer and verified by the Food and Drug Administration (FDA). When a prescription or over-the-counter (OTC) drug is under development, the manufacturer determines the specific uses, including the doses to be used. The FDA then will evaluate the drug for these specific uses, looking at both the drug's effects and safety before granting permission for the drug to be sold in the USA. 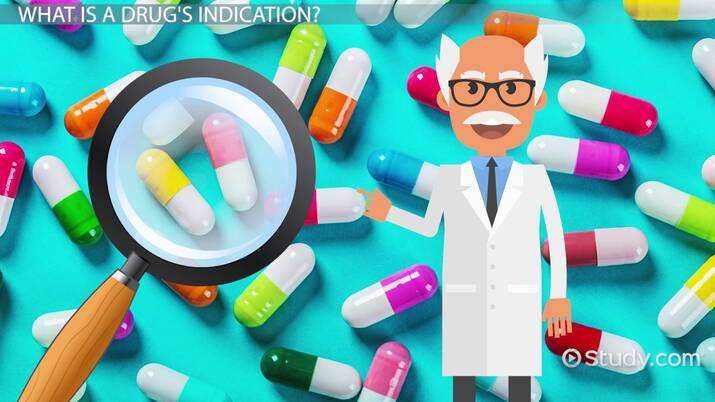 Coming up next: Scientific Medicine vs. Holistic Medicine

A drug indication is the specified condition or symptom that the drug is approve to treat, cure, diagnose or prevent.

Drug indications cover a range of considerations, such as:

Drug indications refer to their specified uses, whether that is to treat, diagnose, cure or manage a disease and or its symptoms.

Some common medications and their indications are:

Remember, drug contraindications describe the conditions under which a drug should not be taken because it may be harmful. Not only do contraindications exist for drugs, but also for devices and procedures; for example pregnant women should only get x-rays to the abdomen when the benefits outweigh the risks to the fetus.

There are also different types of contraindications:

Examples of contraindications include:

Contraindications prevent situations where the procedure or drug could cause harm, either by changing the amount of the drug in the blood, decreasing a drug's effect, causing toxicity, or making any pre-existing condition worse. Ignoring these warnings may be harmful and can cause a range of effects, from lowering a drug's effectiveness to causing an allergic reaction, or even death.

These can result any time a drug is taken due to:

So now we know what the approved use of a drug is (indication) and when it should not be taken (contraindication). But there's more! Some drugs also have an off-label use. After the FDA approves a drug to be used for certain situations (indications), a health care provider may prescribe a drug for another situation (one that it was not approved for but is medically appropriate). This could involve using the drug for another disorder, taking it in another way (capsule vs. oral solution) or taking a different dose. This may be necessary if there are no approved drugs for the disease or none of the available treatments are effective.

An example of an off-label use is metformin which is an oral antidiabetic agent, but is also used off-label to treat polycystic ovary syndrome.

The consequences of ignoring drug contraindications can range from the treatment being less effective to death. There can be drug-drug, drug-food, as well as drug-disease interactions.

What is an example of a contraindication?

Contraindications to drugs or procedures are situations which can make the drug or procedure harmful. This includes allergies to drugs and performing x-rays on pregnant women.

What is a contraindication vs precaution?

Is contraindications the same as side effects?

What is another word for contraindications?

Another word for contraindications is interactions. These include drug-drug, drug-food and drug-disease interactions, all reasons why a drug or procedure should not be used or used with caution.

What is the difference between a drug contraindication and a drug precaution?

The First Pass Effect in Pharmacology

What Is Hemorrhage? - Definition & Symptoms

The Differences Between Infection and Disease