Jack Woerner, Kat Kadian-Baumeyer
Find out about what is "due process" and where the due process amendment is in the Constitution. See due process examples, procedural due process and types of due process. Updated: 11/26/2021

What is Due Process?

Due process is a Constitutional foundation in which legal matters must be fair and be based on a principle of rules and procedures. Due process of law means that a legal matter must be resolved according to fair and just law. In the U.S. Constitution, the Due Process Clause has expanded over time but mostly protects these rights: procedural due process, individual rights listed in the Bill of Rights, and substantive due process. The Due Process Clause guarantees civil rights as interpreted from the Bill of Rights. In numerous cases, for example, due process was used to defend the following rights that they be incorporated into every state in the United States: the right to an impartial jury, free expression of religion, and freedom of the press. 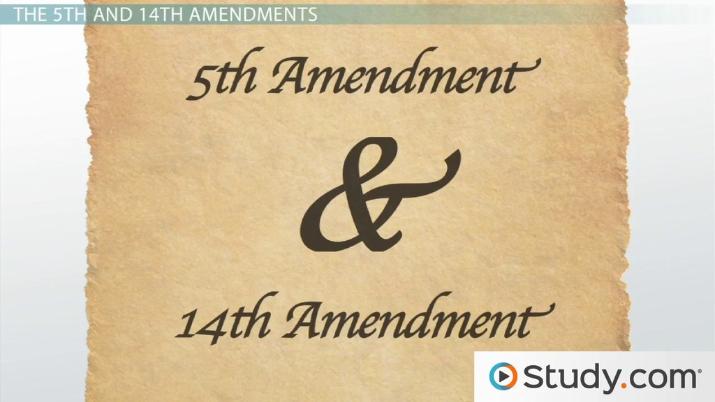 Coming up next: The Equal Protection Clause in the Fifth and Fourteenth Amendments

Due process is in the 14th Amendment in the Constitution and it guarantees due process to be observed in legal matters in the United States. The Due Process Amendment solidifies all rights given in the Bill of Rights and makes sure they are protected in every state in the United States. The primary rights in which the Due Process Amendment protects are known as the "Rights of the Accused" and are the 4th, 5th, 6th, 7th, and 8th amendments in the Bill of Rights:

Types of Due Process

There are three different types of due process found in the U.S. justice system. procedural due process, "Incorporation" of the Bill of Rights, and substantive due process. These are all mentioned in the Constitution but have been expanded on, interpreted, and adapted over time by various Supreme Court rulings for better understanding.

The procedural due process definition is that if a citizen is to be deprived of "life, liberty, or property" by the government in a legal proceeding, that citizen must be given a chance to be heard or given notice in a court of law. The decision or ruling must be delivered by a neutral third party in the case. The following list is not an exhaustive list of what the government must do to give notice in a legal procedure, but outlines a procedural due process example:

Incorporation of the Bill of Rights Against the States

The Incorporation Clause protects all the rights mentioned in the Bill of Rights. However, throughout history in various legal matters, it has mostly been associated with the First, Second, Fourth, and Eighth Amendments. For example, in the case McDonald v. Chicago 2010, an individual defended the right to own and possess a firearm. The 2nd Amendment was argued as a legal ground to defend the right to do so, but the case was appealed to the Supreme Court and the state ruling was overturned. With this ruling by the highest court in the land, the 2nd Amendment became nationally incorporated for all states and a state cannot deprive a law-abiding citizen of the 2nd Amendment right.

The substantive due process definition states that not only are individual rights protected during legal matters, but that protection is extended to other matters outside of the proceedings. Most substantive rights are now always listed or specifically mentioned because every case or hearing is different. They are significant in the rights of due process and they cannot be infringed. The 14th amendment states that the "privileges and immunities" of citizenship cannot be infringed on. For example, Supreme Court rulings have extended the substantive rights to marriage in numerous cases with one of the most impactful ones being the same-sex marriage ruling in Obergefell v. Hodges (2015).

Due process is a foundation of law that ensures that any legal proceeding follows a fair set of rules and procedures. Due process of law in the Constitution guarantees and protects individual rights in any legal proceeding. The Due Process Clause ensures that citizens cannot be deprived of "life, liberty or property" without a fair and just legal proceeding. The 14th Amendment, also known as the Due Process Amendment, protects the rights guaranteed to citizens in the Bill of Rights most notably the 4th, 5th, 6th, 7th, and 8th Amendments.

There are three types of due process of law: procedural due process, incorporation of due process, and substantive due process. Procedural protects citizens by giving them a right to have notice and given a fair hearing before being deprived of "life, liberty or property." The Incorporation Clause of the 14th Amendment against the States makes sure that the Bill of Rights is being protected in all the states and has completely incorporated the 1st, 2nd, 4th, and 8th amendments nationwide. substantive due process protects the rights of citizens outside of legal proceedings like the right to marry, to choose your own job, or to move where you want.

What is an example of due process?

An example of due process is when a citizen is being arrested for a crime, they must be given notice of this crime, when the court case will be held, and given the right to an attorney.

What is the legal definition of due process?

The legal definition of due process is a citizen must be given the equal treatment of the law in a legal proceeding and their rights must be protected in any case.

What are the three types of due process rights?

Three types of due process are procedural (right to have a fair and just legal proceeding, incorporation (Bill of Rights protection extends to states), and substantive (rights outside of legal proceedings must also be protected).

What is Due Process? | Substantive & Procedural Due Process Examples
Related Study Materials

Presidential Power Types & Examples | What Are the Powers of the President?

What is American Political Culture?

The Equal Protection Clause in the Fifth and Fourteenth Amendments