Who is Duke Orsino?

Duke Orsino is one of the main characters from Shakespeare's play, Twelfth Night. Twelfth Night is a romantic comedy that explores the power and allure of love, while using the trope of a love-triangle for comedic effect. The play is set in Illyria, where Duke Orsino is the ruler. Orsino is helplessly in love with a noblewoman by the name of Olivia. Olivia is in mourning due to the death of her brother, and therefore feels she cannot open herself up to love. Orsino, however, is undeterred. Orsino hires a page, who goes by the name of Cesario, to deliver his messages of love to Olivia. Unbeknownst to the duke, Cesario's real name is Viola, and she is only posing as a man. Viola is the main protagonist in Twelfth Night and much of the story is told through her perspective. Shortly after being hired by Orsino, Viola falls in love with the duke. She is unsure how to pursue her feelings, however, because Orsino believes her to be a man.

Throughout the play Orsino complains of his unrequited love, causing him to fall into a state of melancholy. All the while, he has no idea that he himself has an admirer of his own. To complicate matters further, while Viola, under the guise of Cesario, is delivering Orsino's messages, she catches the eye of Olivia. Olivia falls in love with whom she believes to be the young and dashing Cesario, thus completing the love triangle. Orsino loves Olivia, Viola loves Orsino, and Olivia loves Viola.

Despite his often-professed love for Olivia, Orsino becomes quite fond of his newly hired page. The romantic entanglement comes to a head when Orsino travels with Cesario (Viola) to visit Olivia himself. Upon arrival Olivia greets Cesario as her husband. Orsino is outraged, but all is resolved when Viola's twin brother, Sebastian, enters the scene. Olivia had in fact married Sebastian, thinking he was Cesario. Viola then reveals her true identity, and Orsino realizes that he has been in love with Viola the whole time. The play ends happily with Orsino and Viola becoming a couple. 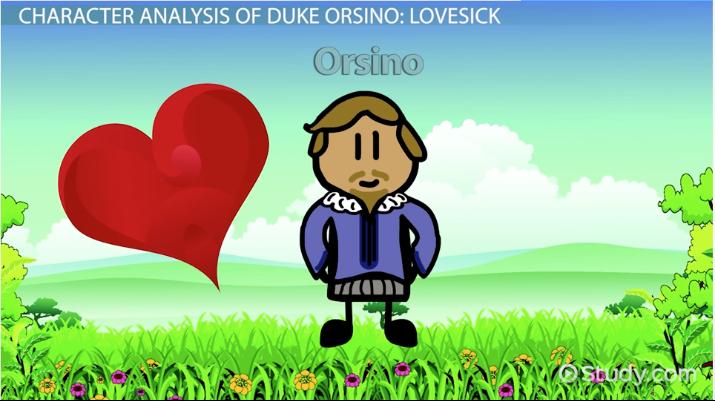 Coming up next: Shakespeare's Antony And Cleopatra: Summary & Analysis

Duke Orsino in Twelfth Night is an interesting character because of the disparity in how his character is described by others versus how he acts and presents himself to the audience. The first introduction to the character comes from his speech at the beginning of the play.

If music be the food of love, play on;
Give me excess of it, that, surfeiting,
The appetite may sicken, and so die.
That strain again! it had a dying fall:
O, it came o'er my ear like the sweet sound,
That breathes upon a bank of violets,
Stealing and giving odour! Enough; no more:
'Tis not so sweet now as it was before.
O spirit of love! how quick and fresh art thou,
That, notwithstanding thy capacity
Receiveth as the sea, nought enters there,
Of what validity and pitch soe'er,
But falls into abatement and low price,
Even in a minute: so full of shapes is fancy
That it alone is high fantastical.

With this speech the audience is given a first impression that this man is melodramatic and self-indulgent. He appears to be more fascinated by the idea of being in love than in actually loving Olivia. Yet in the very next scene a captain describes Orsino to Viola as "A noble duke, in nature as in name." This trend continues throughout the play. Orsino acts one way in front of the audience, but is described by other characters in a very different light. At the climax of the play, Orsino tries to make what he believes to be the ultimate romantic gesture. He threatens to kill Cesario in the name of love.

The character traits that Orsino displays include fickleness, self-indulgence, erraticity, and melancholy. He comes off as a moping noble who wallows in self-pity. He appears more concerned with the philosophical notions of what love should be rather than the actual feeling of love. He even boasts of his self-indulgence and erratic behavior to Cesario, both because he associates the behavior with love and because he will not, or cannot, see that things are not as he would like them to be.

However, the character traits that other characters ascribe to Orsino present a very different man. To them he is brave, generous, and noble.

Only in the resolution of the play does Orsino's true nature show itself. After discovering Viola's true identity, he admits to himself that it is she he has loved all along. In coming to this realization he is snapped out of his melancholy, entering a state of loving grace. In that state, he shows himself to the audience as the man others describe him as and proves why Viola loves Orsino: he is a kind, generous, and noble lord.

Duke Orsino is a central character in Shakespeare's romantic comedy, Twelfth Night. Orsino is the ruler of Illyria and a man who claims to be in love with the noblewoman, Olivia. However, in the audience's introduction to Orsino he shows himself to be melancholic and someone who is more in love with the concept of love than he is with Olivia. He later boasts to his page, Cesario, of his self-indulgent and erratic behavior. He does this both because he associates the behavior with love and he will not, or cannot, see that things are not as he would like them to be.

Cesario is actually a woman in disguise whose true name is Viola. Viola is the main protagonist of the play, and while working for Orsino as Cesario, she falls in love with the duke. Orsino grows fond of her as well, but does not know her true identity. He sends Viola off to deliver love letters to Olivia. Olivia in turn falls in love with Viola, thinking she is the young and dashing man Viola is pretending to be. At the climax of the play Orsino threatens to kill Cesario after finding out Olivia's feelings for him. It is only when Cesario reveals himself as Viola and admits her love for Orsino that the duke shows himself to be the generous and noble person that others describe him to be. After finding out Viola's true identity he realizes it is she that he has loved all along, causing the duke to enter a state of loving grace.

Who does Duke Orsino marry?

Orsino marries Viola after she reveals her true identity to him. Orsino comes to the realization that it is Viola, not Olivia, he truly loves.

Who is Duke Orsino in love with?

Throughout the play Duke Orsino constantly professes his love for Olivia. In doing so, however, he sounds more in love with the idea of love than he is with Olivia. In the end, he realizes that he truly loves Viola, not Olivia.

What type of character is Orsino?

Orsino is presented as a character with two very different aspects. In one aspect he is a fickle, self-indulgent, and erratic duke. In the other he is a kind, generous, and well-loved leader.

How does Orsino feel about love?

Orsino is infatuated with the grand philosophical ideals of what he believes love to be. He seems more interested in being in love than actually loving Olivia.