The other reactant is a base such as sodium hydroxide (NaOH) or potassium hydroxide (KOH). The hydroxide in the base ends up as water, and the cation forms an ionic bond with the leaving group. The reaction is often written only showing the hydroxide with it implied that any cation could be included. 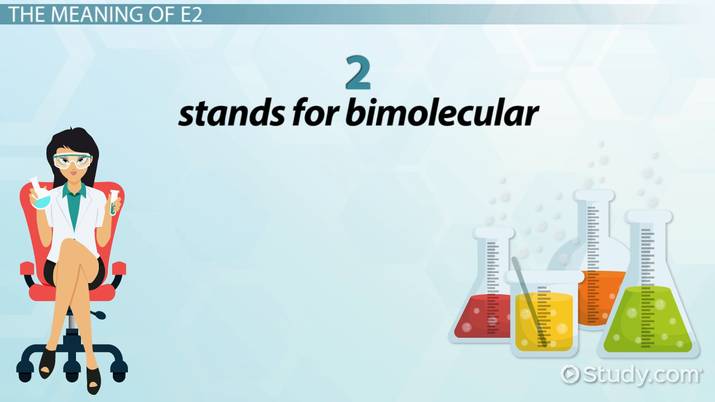 Try it now
Back
Coming up next: Spectroscopy: Definition and Types

In the E2 reaction mechanism there are three things that are occurring at the same time:

The E2 reaction stereochemistry is both regioselective and stereoselective. Regioselective refers to a reaction that can produce more than one constitutional isomer (the chemical formula is the same, but the structure is different), but one is preferred over the others. For the E2 reaction, the more substituted alkene is preferred. Stereoselective means that there are two or more possible stereoisomers (the structure is the same, but the 3D orientation is different) as a product, but one is formed predominantly. For the E2 reaction, the trans product is preferred.

In the above secondary halide, there are three possible products. If the hydrogen circled in red is removed then 2-methyl-2-pentene is formed:

If either of the hydrogen atoms circled in blue is removed then 4-methyl-2-pentene is formed:

In cases where a more stable tri-alkene could form but would require a cis-hydrogen to be removed, then this E2 reaction cannot occur. This can be seen when looking at 1-chloro-2-methyl-cyclohexane:

Instead, the only hydrogen atom that can be removed is the hydrogen atom on carbon 6, trans of the chlorine, forming 3-methyl-cyclohexene:

Halides are not the only possible leaving group for an E2 reaction to occur. Alcohols can also act as a leaving group if the alcohol is first hydrogenated (given an extra hydrogen), making it {eq}OH_2^+ {/eq} so that it can leave as water. Starting with propanol, the oxygen can get an extra hydrogen using an acid. This makes {eq}H_2O^+ {/eq}, which is an excellent leaving group. If the trans hydrogen on carbon 2 is removed, the water can leave and form a primary alkene.

E2 reactions can also form alkynes when it starts with an alkene:

When an E2 reaction occurs on 3-fluoro-4-methyl-hexane there are four possible products, with the major product being 4-methyl-3-hexene in the trans configuration:

An E2 reaction creates a new pi bond in a single concerted step. Alkanes will form alkenes and alkenes will form alkynes. The 2 in E2 refers to how there are two compounds that are involved in the rate-limiting step. The reaction occurs with three things occurring at the same time:

Depending on which hydrogen is removed around the leaving group changes the stereochemistry of the product. The stereochemistry of E2 reactions is regioselective and stereoselective. The regioselectivity will form the more substituted alkene. This is found by counting the number of R groups attached to the alkene carbons. The stereoselectivity will form the alkene in the transformation, and cannot remove the hydrogen atom that is cis to the leaving group.

How does E2 reaction work?

An E2 reaction occurs in a single concerted step. In this step a base removes the hydrogen, the carbon-hydrogen electrons form a new pi bond, and the leaving groups leaves with its electrons.

What is meant by E2 reaction?

An E2 reaction is an elimination reaction where the concentration of 2 different reactants is involved in the rate limiting step and equation. It forms a new pi bond.

What is a Reaction Intermediate? | Examples & Types