What is an ecological niche? An ecological niche is defined as the role or position occupied by a particular species in its ecosystem. A niche is comprised of conditions created by the biotic (living) and abiotic (non-living) components of an ecosystem that influence how successfully the species can reproduce and obtain necessary resources - i.e., food, water, and shelter. A niche also involves the influence that the species, in turn, has on its ecosystem.

We can understand why a species evolved distinct traits - for example, the ability to camouflage in a particular environment - by studying its ecological niche. Conversely, an ecological niche can allow us to predict potential features of the species that might exist in it. This prediction method has previously assisted scientists with the discovery of new species. For example, in 1862 Charles Darwin studied an exotic orchid species (Angraecum sesquipedale) and because of its extraordinarily long nectary, he was unable to attribute the pollination of this flower to any known species. Noticing this unoccupied ecological niche, Darwin predicted that there must be an undiscovered, local species of moth with an equally long proboscis (a tongue-like mouthpart), that was responsible for pollination for the species. While it took another 41 years, his theory was proven correct in 1903 when a new moth species (Xanthopan morganii) with a nearly foot-long proboscis was discovered in the region. 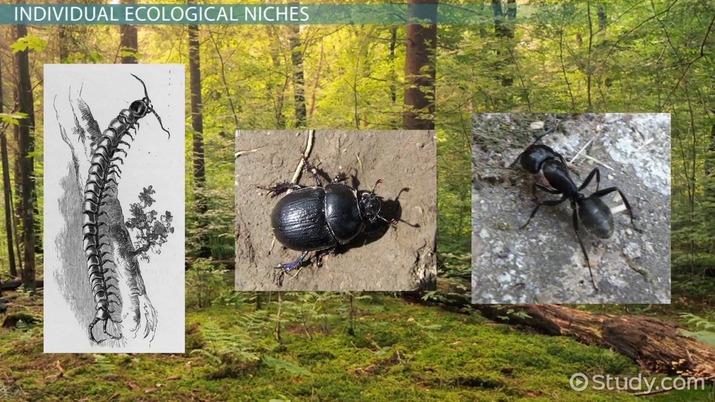 Coming up next: What Is Secondary Succession? - Definition, Examples & Stages

Ecological niches possess characteristics that are dictated by the unique environmental and biological conditions found in them. For example, temperature, available nutrients, and the presence of predators are very important factors that influence the characteristics of a species in an ecological niche.

Temperature can have profound effects on the physiology of an organism, as well as; it can determine the availability of different resources available to that organism. Because of this, the adaptations of polar bears - in a cold, Arctic ecosystem - are significantly different from the adaptations of lions - who live in warmer, savannah ecosystems. Temperature can also influence the behavioral adaptations of a species, such as the time of day when a species is most active, seasonal hibernation, and nesting habits.

All living creatures require access to sources of energy and vital nutrients that serve as building blocks for their growth and reproduction. Limited availability or competition over resources can force a species to occupy another less crowded niche. For example, vultures specialize in eating dead and decomposing flesh - a diet that few other creatures can eat. Alternatively, a species may adapt to use limited resources more efficiently than its competitors.

Pressure from predators can influence the adaptations of a species occupying a niche in several ways, including behavioral tactics (such as living in colonies), physiological traits (such as secreting foul or toxic compounds), or anatomical traits (such as camouflage, where a species evolves a physical appearance that closely resembles its surroundings.)

Realized niches are the specific ecological conditions in which a species actually exists. It considers all the biotic and abiotic ecological interactions, including competition.

Here's a metaphor to help clarify these types of niches. In your life, the city/town you live in might be your 'fundamental niche', while your home address would be your 'realized niche'. Similar to your city, a fundamental niche provides a generalized idea of the place where you might live (such as its climate and topography). Your address - the realized niche - tells us exactly which part of your city you live in, and also factors in more specific factors like its housing market (competition) and its proximity to your workplace (resources).

Ecological niches are important for species, as they allow them to function without high competition for shared, limited resources. Often we can observe the true importance of ecological niches for an ecosystem only when the species occupying it ceases to exist in it. For example, the lack of bees has been seen to cause low fruit yields in greenhouses, due to a lack of pollination. Similarly, we can understand that if bee populations severely decrease on our planet, we might have problems growing sufficient food in the future.

The competitive exclusion principle states that in an ecosystem, two species cannot continue to occupy the same niche forever. Eventually, limited resources will lead to competition, which will force one or both species to adapt to either occupy a different niche or cease to exist. This phenomenon is especially prominent in relation to invasive species, which may occupy the same niche as an indigenous species, and can drive the local species to extinction.

The R* and P* theories further build upon the principle of competitive exclusion.

The R* theory states that multiple species cannot rely on the same resources and eventually will have to differentiate their niches. In this case, species that can tolerate the lowest density of this resource (R*) will have a competitive advantage in driving the other out of the niche. For example, a cactus, that can survive very long dry spells, will outlive a flowering plant that needs frequent watering, during a drought.

The P* theory explains how when species in a niche share a predator, the species that can maintain the highest consumer density (P*) under predation will have a competitive advantage over the other species and retain the niche. For example, a species of rabbit with a very high birth rate may have a competitive advantage over another rabbit species with a very low birth rate, if they both share the same predator (such as a wolf).

Resource partitioning is another way for competing species to adapt to limited, shared resources. In this scenario, species create some kind of differentiation between their respective niches (i.e. a partition), that allows both to continue existing while reducing competition. For example, competing predators in a forest may choose to hunt at different times of the day, or different species of fish may swim and feed at different depths in a water body.

The niche construction theory implies that organisms modify their environments to suit their needs, creating their own niche in the process. An example of this would be the beaver (Castor canadensis), a type of rodent found in North America, that creates large dams across streams to create artificial ponds. They then construct a nesting lodge on an island in the center of this new pond. By doing so they cut off access for their predators, and as a result, manipulate the ecosystem to create their own niche.

There are estimated to be over a trillion species of living organisms on this planet. Each of these species occupies a unique niche in its ecosystem. Studying specific examples of ecological niches allows us to better understand the interactions that occur between a species and its ecosystem. We have discussed several ecological niche examples so far, but let's look at a few more interesting examples - the Kirtland's Warbler (a niche dependent on wildfires) and Dung Beetles (a niche that takes advantage of waste).

The Kirtland's Warbler (Dendroica kirtlandii) is a bird that's found exclusively in the Jack pine (Pinus banksiana) forests of the state of Michigan, in the United States. Its specialized reproductive behavior makes it a great example of a species occupying an ecological niche.

Kirtland's warblers nest on the ground, exclusively under the lower branches of 5-8 years old Jack pine trees. When the trees grow older and taller, these branches begin to die and the warbler will no longer nest beneath them. This is why naturally occurring wildfires, which allow new Jack pine trees to grow, are crucial to maintaining a sufficient population of young trees for the bird to nest under. This is considered the ecological niche occupied by the species.

Around the start of the 20th century, humans began actively putting out forest fires. Over time, this reduced the emergence of young Jack pine trees, which decreased the breeding ground available to the birds. As the niche disappeared so did the population of these birds. However, in the 1970s an increased understanding of this interaction resulted in large areas of Jack pine forests being consciously managed - to replicate the effect of wildfires and promote the growth of younger trees. This restoration of the niche has allowed the Kirtland's Warbler to recover its decreased population.

Dung beetles are infamous for their ability to craft balls out of animal dung, which they roll into underground shelters using their hind legs. These balls of dung are either used as a food source by adults, or a female beetle will lay her eggs inside it and use it to brood her young. Once the offspring becomes an adult, it emerges from under the ground and begins its search for dung to make its own dung balls! As a waste product, dung is a resource not utilized by many creatures; thus, the dung beetle was able to effectively occupy this niche and utilize an abundant resource without much competition! As a bonus, their actions prevent the massive amounts of dung produced by animals from accumulating on the earth's surface and it allows nutrients to return to the soil. These bugs are nature's own clean-up crew!

Fundamental Niche Overview & Examples | What is an Ecological Niche?