The recovery of plant communities after a dramatic disturbance illustrates nature's resilience. The vegetation gradually returns to a damaged ecosystem, forming populations and communities that change over time. That repopulation process, in which disturbed regions are colonized by organisms that are gradually replaced by new species, is called ecological succession. 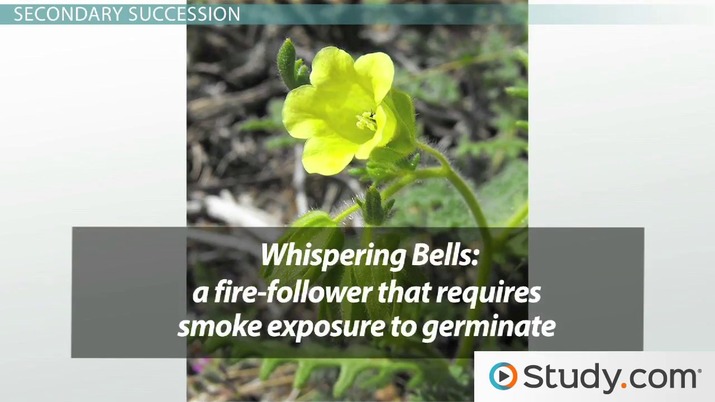 Natural succession occurs through several stages and processes. Succession begins with disruption to an existing environment, followed by increasing organism density and diversity as the region recovers. Ecologists describe environmental succession with the following terms:

These stages and processes involve interactions between plant species and biotic, or living, and abiotic, or nonliving, factors in the environment.

Examining the Stages in Ecological Succession

An in-depth examination of the stages in ecological succession reveals a complex process that is heavily dependent on chance. The timing of each stage, and the species involved, depends on wind direction, weather, human activity, geological events, animal movement, and the species composition of the surrounding environment.

The initial conditions are those that existed before a significant ecological change. In some ecosystems, this may be a state of equilibrium in which species populations are balanced and stable. The output of primary producers, like plants and algae, strongly influences this balance. Initial conditions may already be unstable due to habitat destruction, loss of apex predators, or other ecological imbalances.

The disturbance is the event that severely damages or destroys the existing ecosystem. This may be a major event, like a volcanic eruption or massive wildfire, or a more minor event like a local flood. Little or no life remains in the area after the disturbance, and abiotic factors like sunlight exposure and soil composition change.

Sometime after the disturbance, tiny organisms reestablish themselves in the damaged ecosystem. This return of microscopic organisms and small primary producers is called colonization. The first species to repopulate the environment must be able to tolerate harsh and unstable conditions.

The process in which other species replace established species is called succession. The first organisms to colonize the landscape are diminished or eliminated through resource competition, and larger plant species become dominant. If the initial ecosystem contained a diverse community of herbaceous plants, shrubs, and trees, this process might happen in several stages. In ecosystems with fewer plant species, like grasslands and some wetlands, the process has fewer stages.

The last stage of ecological succession is the formation of a climax community. There is minimal resource competition and no further replacement of dominant plant species.

Primary succession occurs when there is little to no soil left after a significant geological event. Microscopic organisms, like protists, colonize the area first. The first macroscopic organisms are often lichen and mosses that grow from spores carried by the wind. The first colonizing species are called pioneer species and must survive in nutrient-poor conditions. As these pioneer organisms die and decompose, a thin layer of soil forms, supporting herbaceous plants and grasses.

These small plants contribute to further ecological changes that allow shrubs to grow. In a forest ecosystem recovering from severe disturbance, long-lived trees eventually outcompete the shrubs. The speed of this process relies on many factors, including weather, human interference, and the types of seeds deposited by animals and the wind. It may take hundreds or thousands of years for the ecosystem to approach its original state.

Secondary succession occurs after an existing landscape has been altered by human activities, like farming, or natural events, like fires and floods. A remaining layer of topsoil allows plant species to establish themselves more quickly than they would in primary succession. Greater nutrient availability and moisture content mean less competition for these resources in the early stages of colonization.

In some cases, the traits of the plants themselves allow rapid recovery. Plants in shrubland chaparral biomes, like those found in coastal California, are adapted to mild, wet winters, as well as hot, dry summers with frequent wildfires. Dense evergreen shrubs, some of which are called chaparral, live in these ecosystems. Many chaparral plants have roots that spread across the soil and deep into the ground, enabling them to survive when the upper part of the plant burns away. Additionally, many have seed pods opened by fire that quickly reseed the ground. Plants like these, which grow shortly after a wildfire, are called fire followers.

The climax phase of ecological succession is essentially a return to equilibrium in which species composition remains stable. Certain plant types dominate the landscape, like evergreen trees in coniferous forests or grasses in marshes. All present species effectively utilize the ecosystem's resources, making it difficult for new species to take hold. Small changes in species composition may occur with natural events, like when the death of a tree causes temporary forest canopy loss.

While climax communities are relatively stable, they are not permanent. Ecological and climatic changes cause slow shifts in plant communities, as does species evolution. Diseases introduced to the ecosystem quickly alter plant community composition if not eradicated.

Ecological succession is the gradual and continuing replacement of plant species by other plant species after an environmental disturbance.

After a disturbance to the ecosystem, small organisms start to repopulate the environment in a process known as colonization. This first wave of species, called pioneer species, are usually hardy primary producers, and they help bring plant life back to the damaged ecosystem. Changes in abiotic (nonliving) and biotic (living) environmental factors allow some plant species to outcompete others, changing the makeup of the plant communities.

As biodiversity (the number and variety of species in an ecosystem) grows, so does resource competition. Eventually, a climax community forms, which means that dominant, well-established species exist in a steady state with minimal resource competition. This new equilibrium, or balance among species populations, is ecologically stable; however, this state, and the climax community itself, is not everlasting. With the next major disturbance, the process of ecological succession will begin again.

What is the climax stage of succession?

The climax stage of succession is the final stage in which the ecosystem is balanced and relatively stable. Species replacement ceases.

How does ecological succession occur?

What are examples of ecological succession?

An example of primary succession is the recovery of the Mount Saint Helens region after the 1980 eruption. Small plants are gradually being replaced by larger ones on ground that was covered in ash. An example of secondary succession is the recovery of chaparral ecosystems after a wildfire. Soil and protected roots remain, allowing plant populations to recover more quickly.

What is ecological succession and its types?

Herbivory Overview & Adaptations | What Is Herbivory?

Correlation Between Diet & the Evolutionary Adaptations of Vertebrate Digestive Systems

Herbivory Overview & Adaptations | What Is Herbivory?

Correlation Between Diet & the Evolutionary Adaptations of Vertebrate Digestive Systems