What is Ego Integrity vs. Despair?

In those entering late adulthood, Erikson argued, there is a tendency to reflect on one's life and choices and to respond to those memories with either a sense of pride and satisfaction or a sense of despair. The ego integrity definition includes those individuals who feel a sense of peace and happiness with the choices they have made in their lives, while those who cannot reach ego integrity typically fall into despair. Erikson proposed ways for individuals to attain greater ego integrity with a variety of thought experiments and actions. One of the main elements of ego integrity, according to Erikson, is the establishment of ego differentiation, meaning the creation of identity that is not related to a career or to child-rearing. This is particularly important for older adults. 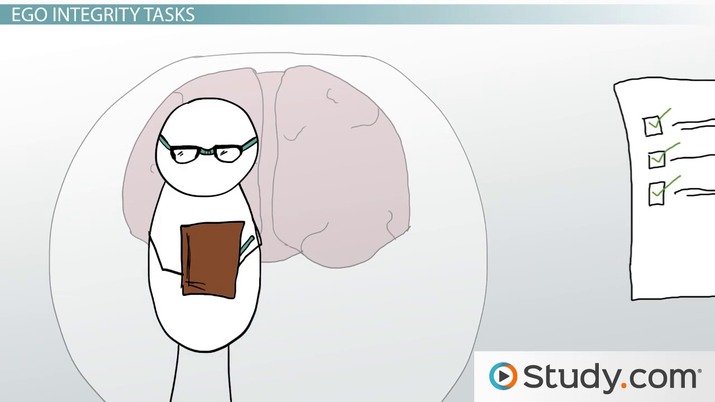 Coming up next: Stereotypes in Late Adulthood: Factors of Ageism & Counter-Tactics

Erikson ego integrity and despair theory is actually just one part of a broader concept of psychosocial states of development. Erikson argued that in all people, there are eight points of life in which particular psychological states arise. In each of these states, either a positive or a negative outcome can be reached depending on a person's individual circumstances and approach to each new challenge. The states are as follows:

Someone who has already had successful outcomes in most or all of the previous seven stages may have an easier time attaining ego integrity, though the process will be different for everyone.

What Are Some Examples?

Understanding the conflict of ego integrity vs despair can be easier with some concrete examples. First, consider an individual who succeeds in experiencing ego integrity, and then someone who falls into despair. Each example can help elucidate the concept in greater detail. While the individual circumstances of a person's life are important when it comes to overcoming psychosocial challenges, Erikson's theory also leaves a lot of room for people to experience ego integrity or despair depending on their personal approach to their own lives.

Jamie is 70 years old. She has retired from her job and her daughter has grown up. Although her life is different from the way it used to be, Jamie feels happy with her current life and feels proud of her accomplishments. She feels that she did well in her career and that she was a good mother. Although her life was not perfect, she feels able to take the good with the bad and accept her past choices. To maintain ego integrity, Jamie remains involved in her local community, has taken up painting, and reads extensively. Though she is less active than she used to be, Jamie experiences body transcendence by accepting the physical limitations of her body and finding joy in her appearance and physical reality. All of these activities help Jamie to feel that she is still a participant in her life and that her experiences all have value. Jamie also spends time with her grandson, which allows her to experience ego transcendence, or leaving a legacy to deal with impending death.

Oscar is 73 years old. He is retired and his children have grown up. When he thinks of his career, he feels a sense of disappointment that he never became a famous photographer like he always dreamed and does not feel satisfied with his own level of success. He does not have a close relationship with any of his children, which makes him feel isolated and contributes to his sense of despair. Rather than taking up new hobbies to occupy his time and keep him involved in his life, Oscar is bored and restless. Although he did have many positive experiences in his life, he is unable to celebrate them or feel satisfied with his accomplishments and instead experiences despair in his late adulthood. He focuses on his mistakes and feels that he does not have enough time to fix them.

Criticisms and Other Theories

Several psychologists have criticized aspects of Erikson's theory. Some have argued that there is too much emphasis on childhood in a theory that purports to span entire lifetimes. Others have questioned the timeline of stages, arguing that many adults experience identity crises at later points and that people's experiences cannot be so cleanly mapped. Some critics have argued that Erikson's theory is too biologically essentialist, arguing for innate differences between boys and girls.

Erikson's theory is sometimes compared to Maslow's hierarchy of needs, which is another psychological theory. The hierarchy involves a set of criteria that must be met before an individual can achieve self-actualization, which is a similar concept to ego integrity. Maslow's hierarchy takes into account a greater number of external factors than Erikson's theory does. It also removes the age-based component of actualization. The needs, in order, are as follows:

Erik Erikson proposed a theory of eight stages of psychosocial development, the last of which is a conflict between ego integrity and despair. Feeling satisfied with one's life and accomplishments and accepting the inevitability of death results in ego integrity, which also consists of ego transcendence (leaving a legacy), body transcendence (accepting physical limitations), and ego differentiation (the creation of identity outside of work). Those who fail to do these things will often sink into despair because of their inability to reconcile their past life and mistakes with the limited time that they have left.