Electromagnetic waves are simultaneous periodic oscillations in the intensity of an electromagnetic field. Unlike traditional waves, they do not need a medium to travel through, and they travel at the speed of light. There are seven types of electromagnetic waves: radio waves, microwaves, infrared light, visible light, ultraviolet light, X-rays, and gamma rays.

What does Electromagnetic Mean?

However, Maxwell's theories were not compatible with classical mechanics, including Newton's laws. And it wasn't until Albert Einstein's 1905 paper on special relativity that this incompatibility was fully explained. Today, we consider electricity (the flow of electrons) and magnetism (the interactions between protons, electrons, and light) to be two sides of the same coin.

There are many terms related to electromagnetism, most of which have origins in the physics of physical waves, as one might find in the ocean. The following is a brief definition of six very important terms related to the structure of waves. 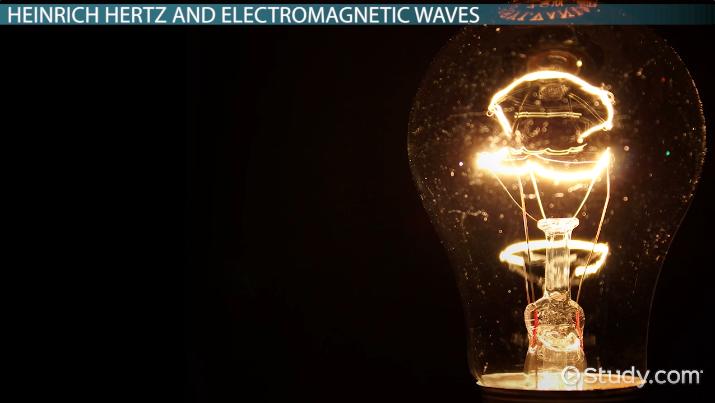 Coming up next: What is a Magnet? - Definition & Examples

Electromagnetic waves can be visualized as pictured, with a simultaneous oscillation of the strength of both the electric and the magnetic fields. Thus, the two waves shown can be thought of as one wave with both a vertical component (electric) and horizontal component (magnetic).

There are seven types of electromagnetic waves, all of which are similar periodic oscillations in the electromagnetic field. Scientists simply classify the waves based on their frequency and wavelength (which go hand in hand). Put together, one ends up with a diagram of the entire electromagnetic spectrum, as can be seen in the image.

The seven types of electromagnetic waves can be thought of as seven different kinds of light. There is only one kind that our eyeballs can detect. However, it is important to note that this is a very human distinction. Some snakes can see infrared light. Some birds can detect ultraviolet light. All in all, these seven types of waves are fundamentally the same. The only difference is their frequency and, ultimately, their effects.

Just above infrared light is visible light. It is not fundamentally different from infrared, but it has a high enough frequency that it can be detected by the human eye. It comes in a variety of colors (red, orange, yellow, green, blue, purple, etc.) that all correspond to different frequencies. The wavelength for visible light varies from 400 to 750 nanometers, and the frequencies are between 400,000,000,000,000 and 750,000,000,000,000 Hertz.

Gamma rays are the highest-frequency type of electromagnetic radiation. They are also the most dangerous. They have a very small wavelength, a high frequency, and each photon carries a huge amount of energy. Gamma rays can be very harmful to humans in high amounts. The wavelengths for gamma rays are classified as anything less than 1 picometer, and the frequencies are anything above 100,000,000,000,000,000,000 Hertz.

Electromagnetic waves are periodic oscillations in the intensity of an electromagnetic field. They come in seven types: radio waves, microwaves, infrared light, visible light, ultraviolet light, X-rays, and gamma rays. One can think of them as seven different kinds of light. And although only one is detectable by the human eye, they are involved in everything from the production of Vitamin-D (ultraviolet light) to the sending of signals over Bluetooth (radio waves).

Discoveries in modern physics have illuminated the fact that electricity and magnetism are simply two sides of the same coin. Electricity is the flow of charged particles called electrons, Magnetism is the interaction between charged particles (electrons and protons). Electromagnetic waves are simply changes in the arrangements of charged particles, which have a wave of reverberating through space and time. Electromagnetic waves are studied using some of the same terminology as physical waves (wavelength, frequency, amplitude, crest, trough, cycle, etc.). They are also categorized by their frequency and wavelength into the seven types mentioned above.

What are the seven electromagnetic waves?

Electromagnetic waves are not mechanical waves. They do not travel through a medium and they do not have mass. They do carry energy, however.

What is the meaning of electromagnetic waves?

Electromagnetic waves are simultaneous periodic oscillations in the intensity of an electromagnetic field. One probably knows them better as "light."

Electromagnetic fields are indeed transverse waves. This means that they travel in a direction perpendicular to their direction of oscillation.

The Structure of the Atmosphere

Refraction Examples | What is Refraction?

Waves: Types & Overview | What are Waves?

What Are Free Radicals? - Definition & Examples