EM Waves and the Electromagnetic Spectrum

Electromagnetic radiation is usually defined as a wave propagating through space, carrying energy at the speed of light. Each wave has two components, one that is electric and one that is magnetic. However, there is another way to think of electromagnetic radiation that is even simpler. Essentially, electromagnetic radiation is light. In fact, it includes seven different types of light: radio waves, microwaves, infrared light, visible light, ultraviolet light, X-rays, and gamma rays. The human eye can only detect one of the seven types, but that is a distinctly human phenomenon. Some snakes can see infrared light. Some birds can detect ultraviolet light. Electromagnetic waves are simply light, of varying frequencies, wavelengths, and intensities. All together, these seven types of light make up what is known as the electromagnetic spectrum. 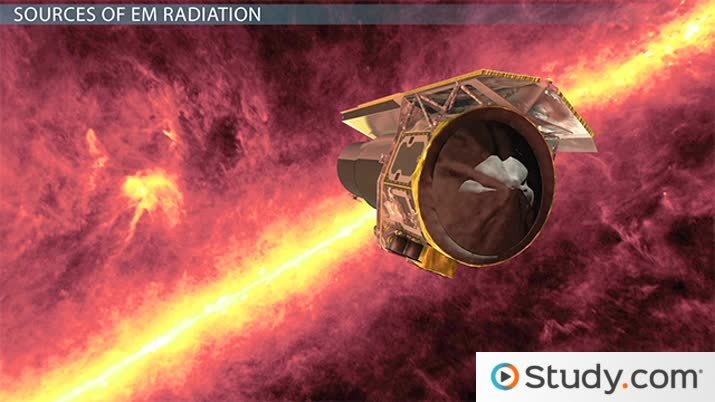 Try it now
Back
Coming up next: The 7 Major Regions of the Electromagnetic Spectrum

What Are Electromagnetic Waves Made of?

Electromagnetic radiation consists of electromagnetic waves, which are simply oscillations in the electric/magnetic field. Electricity and magnetism are often thought of as different phenomena, but they are actually two sides of the same coin, as James Clerk Maxwell discovered. Electromagnetic radiation is created due to periodic changes in the electromagnetic field. How quickly these changes occur dictates the frequency of the oscillation. Since these waves always travel at the speed of light, the frequency also determines the wavelength. Essentially, this determines the type of color of the light that is being produced.

In 1887, the famous Michelson-Morley experiment determined that these waves are special. Unlike ocean waves or sound waves, electromagnetic waves do require a medium in order to travel. This explains their constant speed - the speed of light - regardless of the speed or direction of their source. The exact mechanics of these waves was not well understood until Albert Einstein's theory of special relativity.

What Are the 7 Types of Waves?

Electromagnetic waves vary in both frequency and wavelength. They have been divided by scientists into seven different categories and these seven terms are what represents the different forms of electromagnetic radiation: radio waves, microwaves, infrared light, visible light, ultraviolet light, X-rays, and gamma rays.

In general, radio waves, microwaves, infrared light, and visible light are harmless to humans. These four types of radiation have low frequencies and long wavelengths. Although they are still considered "radiation," a word that is often used with a negative connotation, they are not dangerous.

However, the other three types (ultraviolet light, X-rays, and gamma rays) can be dangerous. Essentially, these are what waves disturb matter. At high frequencies and high amounts, ultraviolet is capable of stripping electrons from the materials it strikes. This can damage human cells and tissues, causing sunburns and even cancer. As noted above, X-rays can be dangerous too because of the high amount of energy they carry. Gamma rays can also be extremely harmful to humans in significant amounts. They are the most powerful and most dangerous kind of electromagnetic radiation. In fact, gamma rays are the reason nuclear waste from power plants and atomic weapons is considered so dangerous. They come naturally from the decay of radioactive isotopes, meaning nuclear waste can emit gamma rays for hundreds or thousands of years after the weapon is used or the nuclear fuel is spent.

Radio waves have the lowest frequency and the longest wavelength; they are used to send transmissions through Earth's atmosphere. Microwaves are also low-frequency and are used in devices like GPS and WiFi. Infrared light is of a slightly lower frequency than visible light and is often used in heat lamps. Visible light is the type of light the human eyeball can detect. Ultraviolet light is of a slightly higher frequency and is the type of light that can cause sunburns. X-rays have a very high frequency but are useful for imaging human bones and organs. And gamma rays have an even higher frequency and are the most powerful form of electromagnetic radiation. They are naturally released from radioactive isotopes, but they are useful in medicine for diagnostic imaging and destroying cancer cells. In general, the first four types have a low-frequency, long wavelength, and are harmless to humans. However, the last three types - ultraviolet light, X-rays, and gamma ray - can be harmful, as they are powerful enough to strip electrons from materials, damage human cells, and even cause cancer.

What are the 7 electromagnetic waves in order?

What is meant by electromagnetic waves?

Electromagnetic waves are a type of radiation. They include the full spectrum from radio waves and microwaves, to visible light, to X-rays and gamma rays.

Are EM waves harmful to humans?

Determining whether electromagnetic waves are harmful to humans mainly depends on their frequency. Low-frequency waves, including radio waves, microwaves, infrared light, and visible light, are not generally harmful. But high-frequency waves like ultraviolet light, X-rays, and gamma rays can be harmful in significant amounts.

What is Nuclear Fission? | Definition and Example