What are Electromagnetic Waves?

There are two main classifications of waves: mechanical and electromagnetic. Electromagnetic waves, or EM waves, are created by vibrations between an electric and magnetic field. Unlike mechanical waves, which can only propagate through a medium, electromagnetic waves can propagate through a medium and a vacuum. This property makes EM waves a useful and versatile component of much of today's technology. Like a mechanical wave, an EM wave has an amplitude, a wavelength, and a frequency. The wave's amplitude is how far away from equilibrium the wave rises and falls. The wavelength of a wave is the distance between wave crests, and the frequency of a wave is how many full cycles of the wave occur in a given time period (see Figure 1). These last two wave attributes -- wavelength and frequency -- determine where the wave falls on the electromagnetic spectrum (see Figure 2). 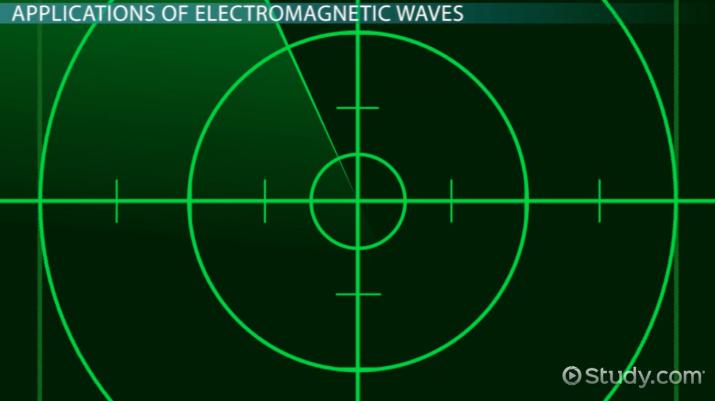 Try it now
Back
Coming up next: The 7 Major Regions of the Electromagnetic Spectrum

Since EM waves propagate irrespective of the medium, present or absent, they are ideal for technological applications. The type of technology that uses electromagnetic waves varies on where the wave falls on the EM spectrum. The following sections will explore different applications of waves across the entire EM spectrum.

Radio waves are on the lower end of the EM spectrum, and they have the largest wavelength on the EM spectrum. Radio waves can travel centimeters or thousands of meters, and they are most often used for communications. Devices such as car radios, radar, televisions, and cell phones use radio waves to carry information.

Microwaves fall below the visible light spectrum, and they are considered to be the upper boundary of the radio wave spectrum. Basically, microwaves are far-traveling radio waves, so aside from being used for cooking food, they are often used to extend the range of communication signals. Devices such as satellites and remote sensors use microwaves to carry information at great distances.

X-rays are electromagnetic waves that fall far outside the visible light spectrum, and the most well-known use of X-rays is in medical imaging technologies, such as X-ray machines and CAT scans. These types of X-ray-dependent devices use moderate amounts of radiation. Larger amounts of X-ray radiation are used for radiation therapy to treat cancerous cells, and, in smaller amounts, X-ray radiation is used to irradiate food. Other applications of X-rays include nuclear weapons, smoke detectors, and airport security scanners.

Gamma rays have the shortest wavelength on the electromagnetic spectrum, and, like X-rays, gamma rays are considered ionizing radiation. Ionizing radiation is a form of EM wave that has the potential to rip electrons off of atoms in space. While this type of radiation is very dangerous because it kills living cells, it can also be extremely useful if harnessed and used properly. For example, gamma rays are used in aggressive cancer treatments because the radiation kills the cancerous cells. For the same reason, gamma rays are also used for sterilizing and disinfecting.

Another use of gamma rays is in medical imaging. Unlike X-rays which are able to produce an image, gamma-ray imaging requires the injection of a radioactive substance that emits small amounts of gamma radiation. This radiation is then detected, and an image is created based upon the location of the radiation emission. This form of medical imaging is primarily used to diagnose soft-matter-like skin and muscle tissue, whereas X-rays are used to diagnose hard-matter-like bones.

Radio waves have the longest wavelength, and they are used primarily for communications. Microwaves have a slightly shorter wavelength than radio waves, and one use for microwaves is to extend the range of communications signals. Infrared waves are just below the visible light spectrum, and they are commonly used in thermal imaging technology. Ultraviolet waves, also UV radiation, are used in devices, such as bactericide lamps and black lights. X-rays and gamma rays are forms of ionizing radiation used for medical imaging and cancer treatments. These are only a few examples of electromagnetic waves in everyday life.

In this research project, students will make a short video explaining how one technology, that relies on electromagnetic waves, works. Students can use their phone, a computer, or tablet to record themselves, then edit the software in many different programs, such as iMovie, or even social media platforms, like Instagram. If a recording device is not available or not appropriate for students, have students put on a presentation for a small audience.

For example, students might choose to research how an X-ray machine is used to take pictures of people's bones. Students would explain what an X-ray machine is used for, how it works scientifically, and how it uses electromagnetic waves. Students can use diagrams, images, or other clips in their short video. After students are done, they can even upload their video to YouTube or other broadcasting apps to share it with the world.

In the lesson, you learned about the different applications of electromagnetic waves. Now it's time to expand your knowledge and share it with the world. In this creative assignment, you will be creating a short video (less than 5 minutes) on one application of electromagnetic waves. In your video, you should explain the purpose of the technology you chose to research, how electromagnetic waves are used, and how the technology works scientifically. Your video should be interesting and visually appealing. Consider writing a script out first and editing your raw video to add special effects, clips from other videos, or B-roll footage of the technology itself. Consult the criteria for success to make sure your video has everything it needs. When you're done, consider uploading your video to a publication platform like YouTube to share your information with the world.

What are electromagnetic waves, and how are they used in everyday life?

Electromagnetic, or EM, waves are created from vibrations between electric and magnetic fields. EM waves do not need a medium to propagate, making them ideal for information transfer. For example, electromagnetic waves are used for radios, television, and medical imaging devices in everyday life.

What are three examples of electromagnetic waves?