When people go to work every day, they generally don't do it because it's fun; they do it because they get compensated. Working is part of the labor market where employers exchange compensation for work. But what is employee compensation, and is it just another word for wages or pay?

The employee compensation definition is any money or benefits paid to an employee in exchange for work. From the employee's standpoint, compensation is everything that they get for the work they put in. Different businesses compensate their employees in different ways. Some employees earn a wage, and that's all. Other employees earn a base salary and then receive bonuses or commissions. In certain cases, compensation can include things like stock options, company cars, or even housing. 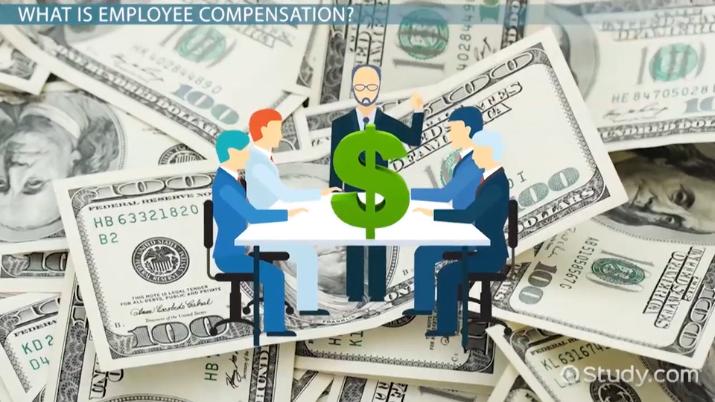 When people are paid by their employer, they are done so in different ways and include different things. But when the dust settles, most employee compensation contains one or more of three key components. Some employees only receive one component, while others may receive all three. The three components are fixed income, variable income, and benefits.

A fixed income is compensation set at a standard rate, and the employee is always paid the same rate. Fixed incomes come in the form of hourly wages, salaries, and contractual wages. The important thing to consider is that fixed incomes will remain the same as long as the employee works the required time. The following are three examples:

Variable pay is when an employee is paid based on commission, sales, or other objectives that change from period to period. The compensation is considered variable because it is based on numbers that can change, and the variations are out of the total control of the employee. The following are some examples.

The list of potential benefits could be endless, and those benefits depend on many things such as level of employee, industry, experience, and location.

When a company lists a salary as a base salary, it generally means that it pays both a fixed income and a variable income. Most positions with a base salary have some sort of variable compensation that is paid above and beyond the base salary. That compensation could be based on sales of the individual employee, the department, or even the company itself. Base pay is very common in sales jobs where the base pay is low, and the employee can increase their salary by increasing their sales.

When an employee is compensated based on commission, they are given an agreed-upon rate based on some sort of action of the employee. Most times, a commission is based on sales. An employee might get paid 7% of total sales, for example. Other times the action might be on volume. An employee might be paid a certain amount based on how many items they produce, sell, or ship.

Overtime pay is compensation to employees who work more than 40 hours a week. This type of pay can be controversial because it is very hard to monitor beyond workers who are paid by the hour. Hourly employees have to clock in and out, and if their hours go beyond 40, they are paid at a higher rate of pay for the time. Technically salaried employees should fall under overtime rules as well, but since they are not tracked for time, most salaried employees don't get overtime pay.

Profit-sharing is a kind of bonus given to employees based on the performance and profits of the company in a year or a quarter. Profit-sharing is usually a percentage of the profit for the period that is divided across the eligible employees. The bonus from profit sharing will vary once it gets to the individual employee level and is agreed on as part of a compensation package.

One way that a company can compensate its employees is through company stock options. If a company is publicly traded, they can give employees certain shares of the company stack as a part of their compensation package. Stock options are seen as an attractive way to entice employees to perform for the betterment of the company while not having to dole out liquid cash. Stock options can be used in several ways to compensate, such as part of monthly earnings, commission-based, or as a regular or sporadic bonus.

Most of the other compensation methods beyond the ones described fall into a very broad category known as perks. Perks are something extra and desirable that comes from being in a certain job or position.

It might seem silly to have a category dedicated to why compensation is important, but there are some nuances that are important to differentiate and analyze. While the main reason people work is to be paid money, that is not always the chief reason why an employee might leave their position or agree to take a position.

If a company wants to hire an industrial engineer and pay them $15 an hour, they are going to have an open vacancy forever. Companies have to look at the industry and the position they are hiring to determine the appropriate salary and compensation for an industrial engineer. There is a market rate for different positions, much like there is a market rate for products. HR departments have to do their research by looking at the industry and the competitors in the industry to determine appropriate compensation levels.

The philosophy of the company plays a role in compensation. Some companies are known to be stingy and by the books, while others are known for treating their employees like family. These philosophies can lead to vastly different compensation packages where one company might give a bigger salary but nothing else. In contrast, another gives a smaller salary but loads on the perks and benefits.

If a company wants to hire John for their new sales manager, they need to compensate him at the same rate or better to entice him to leave his current job. The same can be said for people job hunting. Unless the job market is extraordinarily tight, most job seekers won't take less than their previous compensation unless they get desperate.

While a good starting compensation package is great, it could start to lose its luster if the annual increases aren't built-in or a low. Let's say Nate works for Company A at a salary of $100,000 a year with a 1% increase annually. In his third year, he will make $102,010 a year. Bruce works for Company B and starts with a base salary of $90,000 with an annual increase of between 6% and 10%. At the lowest increase, he would be earning $101,124 in his third year and as high as $108,900. If both employees stayed ten years, Bruce would make a significantly higher salary even though he started by making $10,000 less.

Payroll software is a program that HR uses to help calculate wages, benefits, and taxes. They are essential to the smooth operating of an HR department and the payment of employee compensation. When a software system is in place, it's much easier to be transparent with pay and well accurate with compensation.

While Human Resources is tasked with creating benefits and compensation packages, the company financial officers are the ones that determine the available funds that can be given out to employees in packages. While it might be seen by HR as beneficial to offer highly competitive compensation if the funds aren't provided, HR's hands are tied.

The government has many regulations on compensation, but they mostly apply to wage floors or the minimums that employees can be paid. As of 2021, the minimum wage is set at a wage floor of $7.25 an hour. Some of those policies apply to workers with disabilities and minority workers. There are also regulations in place that are intended to even the playing field for wages across gender and race. But since many compensation packages are individually applied, it's very hard to regulate.

When employees sign a contract of employment, they agree to certain terms, and the company has to abide by those terms. If a raise is guaranteed in writing and the employer doesn't follow the contract, the employee can sue for damages. This applies to many of the procedures in a company that determines compensation like commission rates, performance evaluations, and raises.

But often, employees fear that if they force the company to abide by the compensation policies, they might be indirectly punished, which would be worse than the loss of the benefit.

Employee compensation is the money or benefits given to an employee in exchange for work. There are three main methods of compensation. Fixed income is pay that remains constant based on time periods or work completed. Variable incomes change based on performance or objectives met, and benefits are additional forms of compensation beyond pay. Employees can be paid in many different ways, including base pay, commissions, overtime, stock options, bonuses, allowances, and perks.

What are employee compensation and benefits?

Employee compensation and benefits are the entirety of compensation that an employee receives in exchange for work. This includes everything from pay to bonuses, health care to perks.

What are some examples of compensation?

Compensation comes in many different forms besides monetary compensation. There are bonuses, stock options, profit sharing, perks, and allowances that are part of a compensation package.

What is Compensation Management? - Definition & Components

Salary Overview, Types & Examples | What is a Salary?

Compensation & Benefits: Laws & Regulations | What is Law of Compensation?

Affirmative Action: Definition and Effects on Diversity in the Workplace