What Is the Employment-At-Will Doctrine?

On the flip side, at-will employment also gives flexibility to the employer. The company that Mary is working for can decide Mary's employment at the company is not working out. They do not need to give any specific reason for firing Mary; it could be due to budget cuts, performance issues, or simply character conflicts. It is typically the best policy to document issues so that if Mary feels as though she was let go for illegal reasons, and takes the company to court, the company has evidence of their reasons for firing Mary. But having a reason is not required. It just helps protect the company.

With at-will employment, the company also has additional flexibility. There is no assurance that the company needs to keep Mary on for any specific schedule or pay. The company can change Mary's schedule, pay, or job duties at any time (the company simply needs to let Mary know about the changes before the work is performed). If Mary does not like the changes, she is free to leave the company. 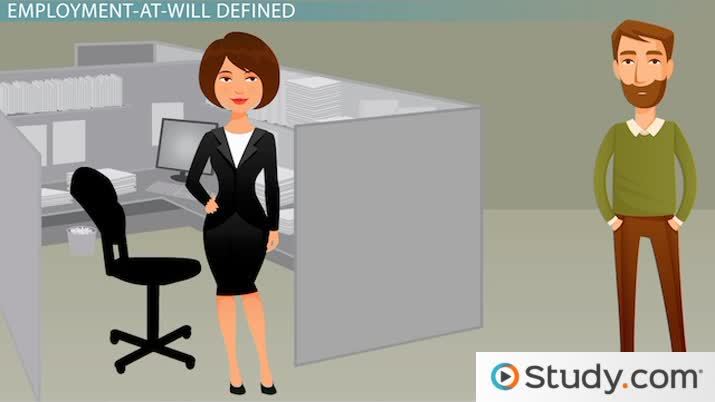 There are a few employment-at-will exceptions. These are grouped into three main categories:

The public policy exception to employment-at-will includes protecting employees from being fired for refusing to do something illegal or for reporting a company for doing something illegal (such as putting illegal ingredients into a food product). It also protects employees who participate in activities that are in the public interest (such as doing jury duty).

The contract exception can include written contracts or implied contracts. A contract can remove the at-will status of a company. This often requires companies to prove the reason they let an employee go. This reason is often defined as economic, poor performance, or employee misconduct. A contract can also bind an employee to a company, requiring them to complete a specific job before leaving the company. Contracts binding employees are often a lot more legally flexible than contracts binding employers. Implied contracts can include oral or written implications. Oral implications can be management stating something such as, ''You've got a job for life''. While courts tend to dismiss promises of jobs for life, frequent statements such as this could help a suddenly dismissed employee show there was an oral contractual expectation that employment would continue for longer than it was given. Written implied contracts would include language in employee handbooks that describe the process of giving employees a chance to correct mistakes before being fired.

Only a small handful of states include security under the covenant of good faith. This exception protects employees from being fired for reasons of malice, such as firing someone shortly before they can retire to prevent the company from needing to pay retirement benefits.

In addition to the three main exceptions, statutory exceptions also exist. Statutory exceptions involve firing someone due to their involvement in a protected class or due to actions outside of work. This includes the employee's race, color, religion, sex, national origin, age, disability, or veteran status. These protected classes are secured at a federal level. A few states also protect employees from being fired due to something they do outside of work, as long as their activities are legal. For example, firing someone for attending a rival's sports event if the event occurred outside of work would not be legal.

Importance of the At-Will Doctrine

In the United States, all states except for Montana have some form of at-will employment laws. But not all of these states have the same exceptions allowed by the law. The statutory exceptions (the legally protected classes) are federally protected, so those are protected in all states. The other three exceptions are applied differently in each state.

The public policy exception is available in almost all states. The only states that don't have this exception are:

The contracts exception is not available in 12 states:

Out of the states in which the exception is available, about half only accept written assurances, not oral.

Employment-at-will is legal protection for employees and employers to be able to end employment at any time, for any reason, except for illegal reasons. At-will means according to the desire, for no other reason. It is often considered a double-edged sword, because an employee can leave a company at any time, with no notice, but it also means that the company can let an employee go for any reason. This can decrease job security for employees. Entering a formal job contract can negate the right to employment at will.

To help job security there are a few exceptions. Public policy protects employees from being fired due to exercising legal rights such as collecting workers' compensation and whistleblowing. Depending on the state, contracts include formal and informal contracts, and can even include oral statements. The covenant of good faith exception is only available in a few states. It protects employees from being fired due to reasons of malice, such as due to personality clashes. Additionally, statutory exceptions federally protect certain classes including religion, race, sex, disability, and other groups. These exceptions help to protect employees' job security, while still giving the freedom of employment-at-will.

What are the pros of the employment-at-will doctrine?

Employment-at-will allows an employee to leave a job without any form of notice, for any reason, at any time. It also allows companies to reliably have employees that fit their needs.

What is the employment-at-will doctrine in HRM?

Employment-at-will means that a company can fire an employee at any time for any reason (except for illegal reasons) and that employees can quit at any time, for any reason, with no notice. Many company handbooks put additional guidelines in place which limit the at-will ability for a company to fire employees.

Horizontal and Vertical Agreements that Violate the Sherman Act