Copyright
Nathan Murphy, Amy Troolin
What was the Treaty of Versailles? In this lesson, learn the terms of the treaty that ended WWI and see if the U.S. joined the League of Nations. What did they include in the treaty and what was left out? Updated: 07/28/2021

End of World War I

By 1917, much of the war had come to a stand-still. This was the first large-scale war that used weapons like machine guns and advanced weaponry. Because of this, armies on both sides dug into trenches where they could have more protection, but this meant it took years to advance even a few miles in some places.

These trenches were most prevalent along the western front in France. France, along with Great Britain, Italy, and the Russian Empire, made up the Allied Powers. This group was also called the Entente and they were fighting the Central Powers. The central powers were made up of Germany, the Austro-Hungarian Empire, and the Ottoman Empire.

While there was very little movement along the western front in 1917, the eastern front in Russia was crumbling. In the Ottoman Empire, the allied forces were slowly moving northward towards the heart of the empire. Between the crumbling of Russia and advancement into the Ottoman Empire, WWI could have gone on for many more years as countries continued to pour resources into the war effort.

In April of 1917, the United States entered the war after Germany began to participate in unrestricted warfare, and sank three American ships that held civilian passengers. Germany also pleaded to Mexico to join the war on the side of the Central Powers in exchange for future support in gaining land back from America. These two events forced America into the war. This was significant because the United States had a rapidly expanding manufacturing sector that could produce plenty of supplies for the war and had a fresh set of soldiers that could replace the war-weary French and British troops. A year and a half after America's entry into the war, on November 11, 1918, the Central Powers agreed to peace talks. Instead of just surrendering, Germany wanted to negotiate a peace treaty in hopes that they might get better peace conditions.

Just months later, in January of 1919, European and American diplomats assembled in Paris, France to determine what the treaty ending WWI was going to look like. All the allied powers, included small support countries, were there to discuss the treaty. The only exception was Russia, as Vladimir Lenin had previously signed a treaty with the Central Powers, and therefore the allied powers banned Russia from participating. Germany was present in the crowd and leaders from the other Central Powers attended after the negotiations were finalized. 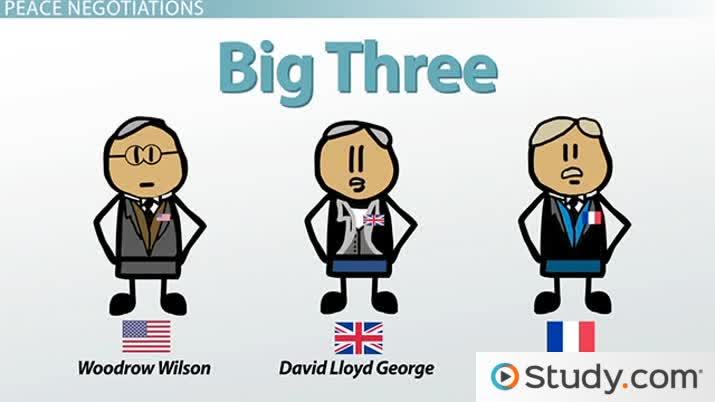 What Was the Treaty of Versailles?

World War I was not started by Germany, however, the allied powers blamed a majority of the war on them. This was because the British and French had to spend an incredible amount of money fighting along the western front in the trenches. They had to spend so much that the United States ended up lending them $12.5 billion which they were going to have to pay back somehow.

Because of this, at the Paris Peace Conference France and Great Britain were primarily concerned with punishing Germany and making sure they would never be able to wage war again. This meant that a large portion of the Treaty of Versailles was focused on limiting post-war Germany.

France and England specifically wanted Germany to pay for the chaos they viewed as Germany's fault and also wanted to make back the money they had to borrow from the United States. The last clause of the treaty was the formation of the League of Nations.

But while the British and the French were concerned with money and limiting Germany, Italy wanted more land. The Italian Prime Minister wanted to gain control of more of the Mediterranean coastline, but when the other members of the Big Four said no, he left the Peace Conference for a short period and the Big Four became the Big Three.

Parties Involved in the Treaty of Versailles

Despite the Big Three making most of the decisions, multiple countries actually attended with requests to be put into the Treaty of Versailles. Members of the Central Powers were also present but not welcomed to participate in negotiations.

Since the Big Three were the main decisions makers though, many other smaller countries were left disappointed. Alongside Italy, The Japanese Empire was also disappointed. They joined World War I on the side of the allies and wanted the Treaty of Versailles to include a clause about racial equality since they were the only major non-European diplomats on the side of the victors. However, this seemingly small request was incompatible with European and American segregation. For these reasons, the Big Four opposed the inclusion of this clause in the treaty, which upset Japan.

European colonies like India also supported the war. Even Gandhi, who practiced non-violent protests, supported the war for one reason. If a colony contributed significantly to the victory of the allies, European powers might be more willing to give them independence.

However, the Treaty of Versailles did not grant freedom to colonies like India or to people like Palestinians who helped defeat the Ottomans. The terms of peace were primarily decided by the leaders of the Big Three such as Woodrow Wilson and diplomats from England and France like Maurice Pascal Alers Hankey. Even though the Allies won, the Big Three was the only party at the conference that benefited heavily from the terms.

While the British and French were focused on punishing Germany so much that they could never wage war again, U.S. President Woodrow Wilson had a different idea. He came up with a set of Fourteen Points that he hoped would ensure peace around the world for decades and centuries to come. Why did Wilson want peace so bad?

The United States was only in the war for a short period, was not damaged at all, and was the primary lender to the European powers. This meant that the U.S. was poised to rapidly grow in power and prosperity and peace was the best way to ensure this would happen.

To try and encourage peace throughout the European Empire and the world, Wilson presented his 14 points. They are as follows:

Most of these points were ignored by France and England because Wilson's points did not punish Germany as harshly.

The most significant of these points is the last one, in which he proposed the League of Nations to be formed. The League of Nations would be an organization where all countries could have a forum to discuss issues and keep the peace. Wilson thought this was important because the Treaty of Versailles was not going to be accurate in five or ten years. However, the organization did not hold up to its foundation and the only major measures of this organization were actions that gave France and England control of the Middle East.

Germany's hope that negotiating a peace would be better than surrendering turned out to be a false hope. They were going to have to pay a massive sum in war reparations and would be significantly hampered in their defense spending. Moreover, they were not happy to have to take the blame for a war they did not feel they started. This led Germany bitter towards the allied powers and much of the world.

Overall, the massive punishment set on the German nation ultimately did more damage than good. The burden of war reparations sent the German economy into a recession and nationalism began to rise. Germany's economic situation worsened with the onset of the world's Great Depression. A man who had formerly been part of the German army emphasized the desperate state of the German people in order to rise to power. Adolf Hitler used poor economic conditions to convince the German people to rise up against the Allied powers and take back what was rightfully theirs, this ultimately led to World War II.

Did the U.S. Ever Join the League of Nations?

Many of Wilson's fourteen points went unheard. But the League of Nations was actually established. However, the United States was not able to join because membership in the league had to be approved by the U.S. Congress. Wilson was very concerned with preserving peace and allowing democracy to spread around the world for many reasons, however, Congress was worried that a League of Nations would limit democracy at home. If the U.S. joined, Congress worried there would be laws and restrictions that the U.S. would have to follow without any say being given to the U.S. legislators.

In reality, the restrictions would have been very minimal, but the fear of another war in Europe was of much less concern to Americans who did not suffer very much from their participation in World War I. This meant U.S. Congress members largely voted against joining the League of Nations in the interest of preserving democracy at home. Most Americans were not that worried about the political situation in Europe and the idea of another world war was not a big concern for the traditionally isolationist United States.

Why did Germany surrender in ww1?

Germany did not technically surrender, they agreed to negotiate a peace treaty in hopes they would get more favorable terms. However, this ended up not being the case and Germany had to sign it anyway because they were so weak by the end of the war.

How was the First World War won?

The First World War was won by the Allied powers once the United States joined in 1917 which finally tipped the scales against the Central Powers and the war was over by 1918.

What were the main terms of the Treaty of Versailles?

The main terms of the Treaty of Versailles were:

- Germany had to pay a large sum in war reparations

- Germany could not move soldiers near the French border

End of WWI, the Treaty of Versailles & the League of Nations
Related Study Materials

Resistance in Turkey and India Between World Wars

Austria-Hungary's Declaration of War on Russia

Britain's Declaration of War on Germany

The Peace of Paris: Ending World War I

Causes of World War I | Imperialism