Copyright
Haripriya Munipalli, Julie Zundel
Discover what endospores are and learn the definition of endospore. Explore the importance of endospores, as well as the formation and structure of the endospore. Updated: 10/02/2021

Bacteria, like Clostridia and Bacilli, form endospores to endure harsh environmental conditions such as nutrient deficiency.

The bacteria recognize and adapt to the changes in the environment. When nutrients are not available, some bacteria look for nutrients at various places or they might generate enzymes to make use of alternative sources.

The bacterial endospores cannot be killed by boiling them at 100 degree C, nor by washing them with alcohol or hydrogen peroxide. However, they can be destroyed by autoclave processes. Autoclaving is done to sterilize the materials at high pressure and at a temperature of 121 degree C for 15-20 minutes. Endospores are visible under electron and light microscopes. They cannot be stained by the bacterial stains used in gram staining.

The adaptive mechanism, called sporulation, developed by the bacteria for perseverance and propagation during stressful environmental conditions, is the formation of endospores.

When growth in the microbial culture has stopped, formation of endospores begins. The sensitivity of bacteria to the environment triggers the formation of a forespore, which suddenly forms with higher dimensions than that of a completed full spore.

The exact reason for the high resistant capacity of endospores to extreme temperatures, chemicals, and radiation is not properly decoded yet. However, several explanations were proposed in this regard by the scientific community.

Characteristics of endospores include that they are visible under light and electron microscopes and that they cannot be stained by usual bacterial stains like safranin. Endospores can be visualized by using Malachite Green and the procedure for staining is called Schaeffer-Fulton staining. 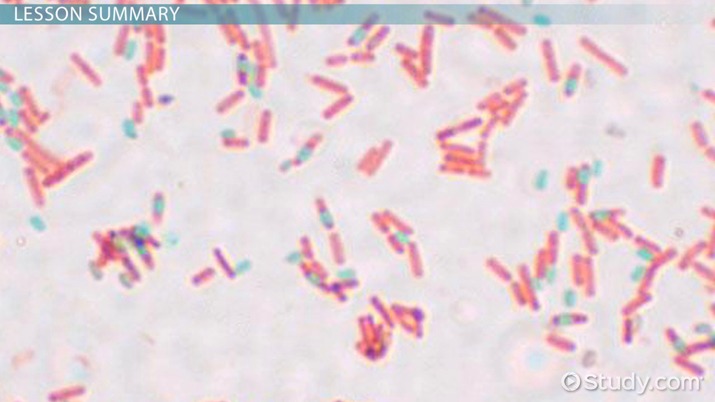 Coming up next: What Are Viruses? - Definition, Structure & Function

Formation of Axial Filament — The genetic material of the bacterial cell gets aligned exactly at the center of the cell.

Development of Septa — The plasma membrane invaginates inwards into the cell interior and creates a septum called forespore septum. This forespore septum formation leads to the division of a tiny portion of the DNA from the rest of the genetic material in the cell.

Forespore Engulfment — The newly formed immature spore is entirely engulfed by the mother cell while its membrane grows continuously. With the engulfment of the forespore, the spore is now surrounded by two layers of plasma membrane and an intramembrane space.

Development of the Cortex — The cortex is formed in between the membranes in the intermembrane space. Calcium and dipicolinic acid get accumulated in this stage.

Development of the Protein Coat — A layer of protein is formed as a coat on the cortex of the newly developed spore.

Maturation of Spores — At this stage, the core becomes extremely dehydrated and the bacterial cell becomes metabolically inactive.

Enzymatic Release of Endospores — The sporogonium, or spore mother cell, is destroyed by the enzymes, releasing the endospores.

Endospore germination involves the dormant endospore transforming into a metabolically active vegetative cell. When there is sufficient food available in the environment, germination of spores takes place. Just like sporulation, germination also takes place in a complex way.

Germination of endospore happens in three stages. They are:

Endospores have a unique structure that is specific for enabling the bacteria to be resilient to the environment. The outer coat is proteinaceous, which provides enzymatic and chemical resistance. Below the protein coat, there is a thick layer called the cortex. The cortex provides resistance to high temperatures. The germ cell wall exists below the cortex.

After the germination of endospore, the peptidoglycan layer will become the bacterial cell wall. The inner membrane, present below the germ cell wall, is a bigger permeability barrier for many damaging chemicals. The core of the endospore is at the center of it and is in a dehydrated state. The core contains the DNA, ribosomes, and dipicolinic acid. Dipicolinic acid is a chemical that is unique to the endospore. It occupies around ten percent of the dry weight of the spore and plays a major role in keeping the spore dormant.

Acid soluble, small proteins are also found in the endospores and they are known to condense and bind the DNA tightly. They are also responsible for resistance to UV light and DNA damaging chemicals. Chemicals, like toxin crystals, and structures, like outer layer made of glycoprotein known as exosporium and stalks, are present in the endospores.

Bacillus form endospores when there is deficiency of carbon or nitrogen in the growth medium. Bacillus subtilis spore coat is a multilayered protective structure that comprises of more than 70 different proteins. Apart from its protective nature, spore coats drive the spore germination and define the kind of association the spores can have with different surfaces in the environment.

Fluorescence microscopy followed by high-resolution image analysis has generated spatially scaled coat protein network showing that the coat has developed into four separate layers. This has led to the discovery of the spore crust, which is the outermost layer of the coat in B. subtilis.

Analysis of spore coat assembly revealed two features about the coat morphogenesis. First, it revealed the formation of scaffold cap on the spore surface with the proteins. Second, the encasement of spores is successive. The coat assembly is regulated at the transcription stage by sequential expression of coat genes and at the translation level by the coordination of directing the coat proteins to form specific coat layers and spore encasement.

Bacterial endospores are dormant, resistant spores produced by gram-positive bacteria during unfavorable environmental conditions and they help the bacteria to endure the harsh environmental conditions. The most studied endospore forming bacterial genera include Bacillus and Clostridium. The endospore producing mother cell is called sporangium. Position of endospore in the mother cell differs. The inner core of the endospore is covered by layers called the cortex, spore coat, and exosporium. The core of the spore is surrounded by core wall and it houses the DNA.

The released endospore germinates to give rise to the vegetative bacterial cell. Germination of endospore occurs in three stages. They are:

What is endospore made of?

The outer exosporium is proteinaceous. Below this layer is a thick layer called cortex, which is made of peptidoglycan. Below the cortex, there is a layer called germ cell wall, which acts as a barrier for many unwanted chemicals. The core is in dehydrated state, housing DNA and ribosomes along with dipicolinic acid.

What is an endospore and its function?

Endospore is a tough, dormant, resistant form of bacteria that is developed to endure the hard environmental conditions by the bacteria. Endospore protects the bacterium from the environmental stress like lack of nutrients.