Mary Gutierrez, Richard Cardenas, Elaine Chan
What is entropy? Learn the definition and formula of entropy. Also learn about entropy specific to gases, examples that use the entropy formula, and applications. Updated: 08/28/2021 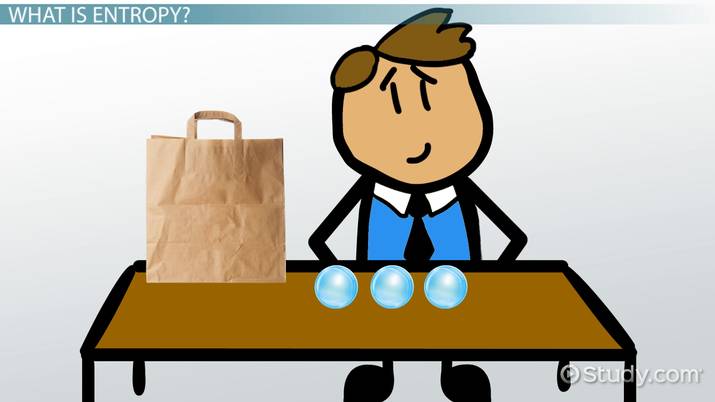 Coming up next: What Is Geothermal Energy? - Definition, Advantages & Disadvantages

The concept of entropy was developed in the early 1850s by Rudolf Clausius due to a response to an observation that a certain amount of functional energy released from combustion reactions is lost to dissipation or friction, thereby not transferring the energy into useful work. Clausius put forth the concept of the thermodynamic system and argued that, in an irreversible process, a small amount of heat energy is incrementally dissipated across the system boundary. He continued to develop the ideas of lost energy and coined the term entropy.

A campfire is an example of entropy. The solid wood burns and becomes ash, smoke, and gases, all of which spread energy outward more easily than the solid fuel.

Here are two examples that use the entropy formula to find a solution.

Almost every chemical and biological process is governed by changes in entropy (and free energy). Here is a real-world example that should help you understand this concept.

In bioenergetics, many of the reactions that take place in living organisms require a source of free energy to drive them. The immediate source of this energy in heterotrophic organisms, which include animals, fungi, and most bacteria, is the sugar glucose. Oxidation of glucose to carbon dioxide and water is accompanied by a large negative free energy change. It can be shown in the following equation:

Of course, it would not do to simply burn the glucose in the normal way; the energy change would be wasted as heat, and rather too quickly for the well-being of the organism! Effective utilization of this free energy requires a means of capturing it from the glucose and then releasing it in small amounts when and where it is needed. This is accomplished by breaking down the glucose in a series of a dozen or more steps in which the energy liberated in each stage is captured by an energy carrier molecule, of which the most important is adenosine diphosphate, known as ADP. At each step in the breakdown of glucose, an ADP molecule reacts with inorganic phosphate and changes into ATP:

Where does the glucose come from? Animals obtain their glucose from their food, especially cellulose and starches that, like glucose, have the empirical formula ({eq}CH_{2}O {/eq}}. Animals obtain this food by eating plants or other animals. Ultimately, all food comes from plants, most of which are able to make their own glucose from {eq}CO_{2} {/eq}and {eq}H_{2}O {/eq} through the process of photosynthesis.

The First Law of Thermodynamics

Where kB is the Boltzmann constant (also written as k) and is equal to 1.38065 * {eq}10^{-23} {/eq} J/K, it shows the relationship between entropy and the number of ways the atoms or molecules of a thermodynamic system can be arranged. It links the entropy of a system (macroscopic quantity) to the number of equilibrium microscopic states that the system allows. The system is a constant (number of particles (N), Volume (V), total energy (E), or constant (N, V, T). The Boltzmann equation links the macroscopic worlds.

The change in entropy of individual gases can be calculated by considering that each individual gas exists alone and is expanded from the initial state to the temperature and volume of the mixture, the pressure at the final state being the partial pressure of the constituent in the mixture.

Other Uses of Entropy

The Law of Entropy can affect other laws and concepts. Below are some examples of how it does just that.

Work is defined as a force causing the movement or displacement of an object. The principle of maximum entropy states that the probability distribution which best represents the current state of knowledge about a system is the one with the largest entropy. An example of work and maximum entropy is the application of thermodynamics in the transfer of thermal energy into work in an engine. In general, this cyclic process involves an exchange of heat with two reservoirs, heat in at a high temperature and heat out at a low temperature, resulting in a net positive work from the process.

The concept and formula associated with entropy can be seen and used in the world of science and in everyday life.

Entropy in Chemistry Concept & Law | What is Entropy?