Is Odysseus a Hero?

Is Odysseus a hero? The central character of Homer's epic poem, the Odyssey, is difficult to pin down. Odysseus is a fearsome warrior capable of great deeds, has many of the Olympian gods assisting him in his travels, yet has many character qualities that chafe against the normal expectations of a Homeric hero. This divide becomes all the more striking as modern expectations render Odysseus' actions increasingly less heroic. He is sneaky, cunning, and does his best to avoid fair fights—not particularly becoming of a hero, either ancient or modern. Furthermore, he fails his initial objective. Odysseus aims to return home with his men, but all of his loyal entourage die on the journey. Despite this, Odysseus' catalog of deeds and position in the Homeric epic ultimately declare him a hero.

Why is Odysseus a hero? Heroes from Greek antiquity draw from two linked sets of expectations. Heroes were expected to embody cultural ideals, and as a result, possess a series of virtues that the Greeks found noble. "Homeric heroes", oftentimes also known as "epic heroes" in Western literary traditions, refer to the archetype of the character created by Homer's Iliad and Odyssey. These two epic poems from ancient Greece laid the foundations for future Western literature, and, as a result, the archetypes and tropes within them were perpetuated far into the future. Because of those two joint influences, Greek heroes are notable for the following qualities: 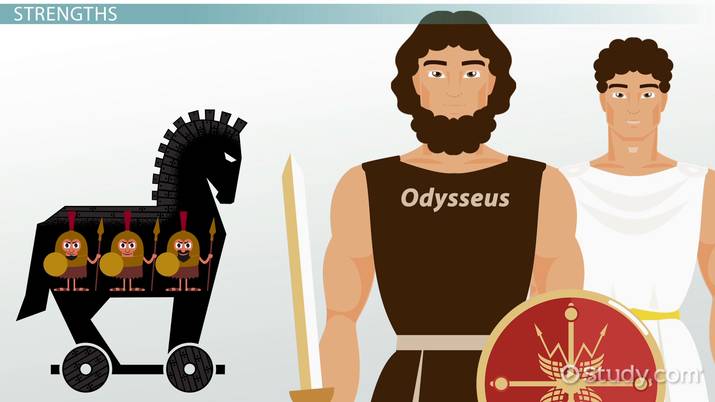 Coming up next: Who was Telemachus? - Stories, Character Traits & Analysis

Why Is Odysseus a Hero?

While some of his actions seem less than heroic to the modern reader—such as his penchant for deception and initial unwillingness to unmask himself to either Penelope or his father—Odysseus possessed each common trait of an epic Greek hero.

In addition to having all the traits of a classic Greek hero, Odysseus also carries the same meta-narrative implications as other Homeric heroes. Homeric heroes are peerless in many respects, standing out from the swathes of humanity around them for their brilliance and near-inhuman capacities. Odysseus achieves a great many things that a normal human would find impossible—the deaths of his crew demonstrate this very vividly, as no others were able to escape and survive the many trials as he did. Odysseus' heroism is ultimately confirmed by his achievements.

Most of Odysseus' strengths match the list of heroic traits above. He is the king of Ithaca—blatantly noble, and of high status. His superhuman strength becomes increasingly clear throughout the epic, reaching a peak during the contests among the suitors. While none of the suitors are capable of firing Odysseus' old bow, he manages to do so with ease. His courage is beyond reproach—though he is known for clever stratagems to avoid or minimize danger, consider his willingness to endure the siren song when none of his crew would.

Each of these characteristics is a relatively common strength possessed by Greek heroes. The element that most distinguishes Odysseus from other Achaean heroes is his cleverness and intelligence. Odysseus is infamous for the various stratagems he employs to solve his problems. These stretch into the past—the Trojan Horse that ended the war was an invention of Odysseus. Even within the Odyssey, Odysseus' ingenuity is on display. He comfortably disguises on multiple occasions and, most notably, when he schemes to escape the now-blinded Polyphemus by having his men hide under the cyclops sheep so that when he pats the sheep to ensure that no men are escaping the cave, he cannot feel them. Odysseus' intelligence is such that Athena herself acknowledges him as the cleverest mortal alive, saying the following in book XIII:

We're both old handsat the arts of intrigue. Here among mortal menyou're far the best at tactics, spinning yarns,and I am famous among the gods for wisdom,cunning wiles, too.

Odysseus' capacity for clever and ingenious stratagems is respected even by the gods. Above all his other traits, it allows him to escape situations that should otherwise be unescapable.

Odysseus' primary weakness comes in the form of his hubris. This flaw is a traditional aspect of Greek heroism itself, with many Greek heroes being overcome due to prideful mistakes. Odysseus' hubris sparks much of his struggling and suffering throughout the epic. By taunting the cyclops Polyphemus with his name, Odysseus enabled Polyphemus to bring down the wrath of Poseidon upon his head, ending in shipwreck and misery. This moment of hubris and the following curse leads to the death of all Odysseus' loyal entourage. Hubris associates Odysseus with the Greek heroic tradition all the more strongly—if Greek heroes are superhuman in many aspects, their pride is understandable. No matter how much power they possess, however, they cannot escape their human limitations.

Odysseus' greatest weakness is his excessive caution and untrusting nature outside of hubris. This is difficult to wholly consider a weakness—in some ways, Odysseus's caution is a strength source. It allows him to escape situations that would otherwise snare him, such as his tremendous care and concern on the island of the lotus-eaters. However, Odysseus' dedication to his disguise causes him to take a great deal of time situating himself when he returns home. He initially hides from both his father and wife—who have remained wholly trustworthy and dedicated to him—and in the process, causes them some degree of additional grief and pain at the perceived death of their son and husband, respectively. Odysseus' near-callous caution strikes a reader as unheroic and unnecessary throughout a great deal of the Odyssey.

Examples of Odysseus Being a Hero

As stated earlier, Odysseus' achievements serve as the best evidence of his heroic nature. The following is a brief list of surpassed trials on his voyage and eventual return home:

The heroic status of Odysseus, the central figure in Homer's Odyssey, is less concrete than other Homeric protagonists and figures in Greek antiquity. Heroes of Greek antiquity epitomize the ideal virtues of their culture. This includes traits such as loyalty, honor, strength, intelligence, and respect. He has many character traits that the Greeks would admire while simultaneously having some divine blood—from the god Hermes—and superhuman capacities. The goddess Athena recognizes him as more astute and clever than any other mortal, and his strength is shown to be unmatched by any other human within the Odyssey. Furthermore, the long journey is synonymous with his quest—Odysseus desperately seeks to return home.

Heroes of Greek antiquity often overlap with the archetype of the epic hero. An epic hero is an individual with divine blood and superhuman abilities who embarks on a grand quest or journey. Odysseus fits both definitions of heroism. Odysseus's heroic reputation's greatest challenge is his conniving character and partial failures. While Odysseus strives to return himself and his men home, persevering through many obstacles in a very heroic manner, none of his men survive the journey. Furthermore, many of Odysseus' great deeds are achieved through trickery as opposed to direct ends. However, as Athena's approval demonstrates, Odysseus' trickery was considered an admirable trait—no matter how underhanded his victories can seem, those same victories tout his reputation as a hero.

In this lesson, you learned about all of the characteristics of an epic hero. You then were given information about Odysseus' strengths and weaknesses. Based on this information, Odysseus has been determined to be a hero. For this activity, you are going to respond to the following essay prompt:

Do you agree that Odysseus deserves to be called an epic hero? Why or why not? Use text evidence to support your answer.

First, review all of the information from this lesson and draw your own conclusion. Next, you will need to create a thesis statement. This thesis statement should clearly and concisely express your opinion. Here is an example of a thesis statement that could be used for this writing activity: Although Odysseus possesses many characteristics of an epic hero, he shouldn't be called an epic hero because it cannot be proven that he is of mixed or divine birth. After your thesis statement is written, it is time to organize your ideas by using the outline below. Once your outline is completed, start writing your essay. Make sure to revise, edit, and proofread your work before publishing or turning-in.

What qualities make Odysseus a hero?

Odysseus is an individual who achieves a variety of great deeds through sheer strength of arms and cleverness. Because heroes of Greek antiquity embody the cultural ideals of the time, Odysseus' loyalty, strength, intelligence, and courage all render him heroic.

Why is Odysseus not considered a hero?

Odysseus' conniving nature and cautious willingness to hurt those most loyal to him—in this case, remaining disguised when speaking to his wife and father, both of whom think he is likely dead and miss him dearly—make him seem less than heroic. In addition to this, his flaws spark a series of events that end with his men's death during the journey home.

Important Quotes from The Odyssey

Athena in The Odyssey by Homer | Character Analysis & Role

Odysseus and the Trojan Horse

Suitors in The Odyssey by Homer | List, Characters & Traits

Who Is Eumaeus in The Odyssey?

Thrinacia in The Odyssey

Themes in The Odyssey by Homer | Hospitality, Analysis & Quotes

Poseidon in the Odyssey Traits & Myth | Who is the Son of Poseidon?