Copyright
Joanna Tatomir, Elizabeth Friedl
Learn about the epidermis in plants. Discover the function of epidermal cells in plants and understand the structure of the epidermal tissue in plants. Updated: 10/31/2021

As the tissue representing the outermost cell layer of the plant body, the epidermis consists of tightly packed cells that provide both strength and flexibility to the plant as it responds to sunlight, water intake, and growth. Epidermal cells in plants play an important role in both photosynthesis and the overall health of the plant. Epidermal tissue in plants is comprised of three main cell types: pavement cells, guard cells, and their subsidiary cells. These three cell types, along with the function of the epidermis, will be further discussed in detail as part of this lesson.

The cuticle represents the first layer of the epidermis that interacts with the environment. Epidermal cells produce the cuticle as a waxy secretion that contains cutin, a polymer contributing to the lipophilic ("fat loving" or hydrophobic) characteristic of the cuticle. Due to this lipophilic quality, the cuticle is able to prevent water loss in plants.

Much like the skin of an animal, the cuticle constitutes the first layer of defense against a variety of pathogens and mechanical stressors, such as insect predation, direct sunlight, and fungal infestation. The cuticle also helps to regulate which substances can enter and exit the plant, as well as change its composition in response to environmental conditions. For example, when a plant detects a potential fungal infection, the cuticle can produce special substances like terpenoids and flavonoids with antifungal properties.

Just as hormones direct many of the activities in animals, such as growth and reproduction, hormones also play an important role in the secretion of the cuticle, as well as in the types of cells comprising the plant epidermis. 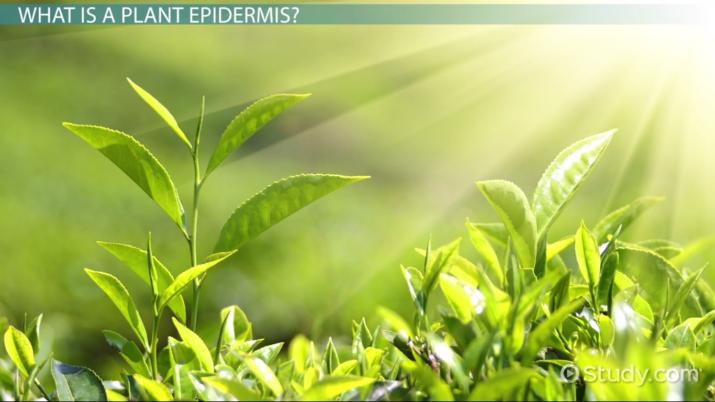 Try it now
Back
Coming up next: Plant Shoot System: Structure & Function

Structure of Epidermis in Plants

The actual cells of the epidermis lie beneath the cuticle. The epidermis consists of two different cellular layers: the upper epidermis and the lower epidermis. The upper epidermis contains the cuticle, as well as cells lacking both stomata and chloroplasts. Stomata represent the tiny pore-like openings in leaves that facilitate gas exchange. Chloroplasts are plant organelles where photosynthesis takes place. By contrast, the lower epidermis is characterized by the presence of numerous stomata that control the absorption and release of carbon dioxide, oxygen, and water.

Pavement cells represent the most common cells found in the epidermis. The basic function of the pavement cell is to protect the underlying plant tissue. As such, they possess few stomata and generally lack the ability to facilitate the exchange of carbon dioxide and oxygen. These cells tend to be non-differentiated and contribute to the overall strength of the epidermal tissue.

Guard cells represent pairs of specialized cells that surround each stomata. One of the main functions of the guard cell is to prevent water loss via the stomata. The second function is to control the opening and closure of the stomata to enable the exchange of carbon dioxide and oxygen. As a result, these bean-shaped cells are crucial for photosynthesis to occur in plants.

While the epidermis is responsible for maintaining the overall structure of the plant, the ground and vascular tissue systems enable the plant to carry out metabolism and the transport of nutrients throughout the plant. The ground tissue and vascular system are sandwiched between the upper and lower epidermis.

Ground tissue comprises a majority of the internal plant tissue. This tissue, sometimes referred to as the mesophyll, sustains the metabolic activity of the plant by storing nutrients and water. Ground tissue function is dependent on where these cells are found within the plant. One type of ground tissue, parenchyma, is responsible for photosynthesis and nutrient storage. Collenchyma, the second category of ground tissue, provides structural support to parts of the plant undergoing growth. The final type, sclerenchyma, provides structural support to non-growing portions of the plant.

Despite the presence of the epidermis as a protective layer in plants, the stomata create openings in the dermal tissue that enable the passage of carbon dioxide, oxygen, and water. Both the stomata and ground tissue are therefore essential for the process of photosynthesis to occur in plants.

Function of Epidermis in Plants

The primary function of the epidermis is to protect the internal tissues of the plant from the external environment. Other functions include:

The epidermis represents the outer layer of cells which helps to protect plants from the external environment. Epidermal cells secrete a lipophilic substance known as the cuticle, a waxy layer that protects the plant from water loss and pathogens. The epidermis is divided into two parts, the upper epidermis containing the cuticle and the lower epidermis consisting of stomata and guard cells. The three main cell types found in the epidermis include:

Sandwiched between the upper and lower epidermis are the ground and vascular tissue systems. The ground tissue is the main site of photosynthesis in plants, while the vascular tissue transports substances throughout the plant. Vascular tissue consists of the xylem, which is responsible for transporting water and minerals, and the phloem, which is needed for nutrient transport. Other functions of the epidermis include protection from predation, providing plants with coloration and structures to attract pollinators and the prevention of water loss.

What is a plant's epidermal cell?

What is the function of the epidermis?

The main function of the epidermis is to protect the plant from the external environment. Other functions of the epidermis are to provide coloration and structures to attract pollinators, protect against water loss, and protect from fungal and bacterial pathogens.

What is the main function of the epidermal plant tissue?

The main function of the epidermis is to protect plant tissues from the external environment. The epidermis also prevents water loss and protects the plant from predation.

Root Hair in Plants: Function & Overview | What is Root Hair?

Vascular Bundles Function & Types | What Are Vascular Systems in Plants?

What Is Botany | The Study of Plants

Root Hair in Plants: Function & Overview | What is Root Hair?

Vascular Bundles Function & Types | What Are Vascular Systems in Plants?

What Is Botany | The Study of Plants