Stereoisomers are two molecules that have the same molecular formula and the same connectivity amongst their atoms, and differ only based on their 3D structure. These differences in 3D structure arise from differing relative arrangements of atoms (or groups of atoms) around a stereocenter, which refers to an atom bound to four unique molecular groups that can produce one of two possible relative arrangements of these groups. Two molecules that differ in 3D structure relative to just one stereocenter are mirror images of each other and are called enantiomers. Some molecules have more than one stereocenter. These molecules do have enantiomer pairs. However, for molecules with more than one stereocenter, enantiomer pairs must differ in arrangement at every single stereocenter. Pairs that differ at only some, not all, stereocenters are called diastereomers. Epimers are the individual members of a diastereomer pair. Unlike enantiomers, epimers are not mirror images of each other. Therefore, epimers do not have the same optical properties as enantiomers of bending plane-polarized light in equal and opposite directions.

Epimerization refers to the conversion from one epimer of a molecule to another. This can happen spontaneously (which is typically a slow process) or be catalyzed by a group of enzymes known as isomerases. Isomerases typically catalyze the switch in stereochemistry of one stereocenter in a molecule. Therefore, they typically catalyze the switch between epimers, but not enantiomers, of molecules with more than one stereocenter. Two examples of epimerization catalyzed by isomerases are the relief of torsion stress at DNA replication forks by topoisomerase and the conversion of N-acetylglucosamine to N-acetylmannosamine by renin-binding protein.

Anomers are useful to explore as a specific type of epimer because the conversion between cyclical carbohydrates and reduced sugars (and back again) occurs when catalyzed by acids and bases in solution. This flexibility between forms is also known as mutarotation, as the flexibility of these forms would cause the anomeric carbon to rotate between each form. However, this does not mean that each form is favored equally in all circumstances. For example, it is known that a sample of D-glucose will eventually resolve into a compositional equilibrium made up of about 64% beta-D-glucopyranoside and 36% alpha-D-glucopyranoside.

Another way to think about the flexibility between anomers is to consider the designation of the anomeric carbon as being in a hemiacetal or hemiketal bond. The prefix "hemi-" means partial, meaning that a reducing sugar has partial double bonds with each of the oxygens attached to the anomeric carbon (or a bond that falls in between a single and a double bond). This partial bond is more accurately an average, which represents the relative favoritism that the molecule has towards each anomer. 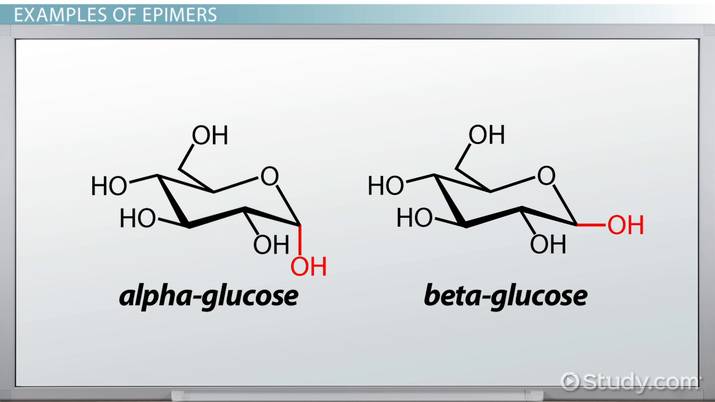 Coming up next: Allylic Strain Energy in Organic Chemistry

Epimers are also very common among drug molecules, as these also tend to be larger-sized molecules. Examples of drug molecule epimers are the drugs doxorubicin and epirubicin, which are both chemotherapy drugs.

The process of changing from one epimer to another is called epimerization. This can occur spontaneously or be caused by enzymes known as isomerases. Anomers are a specific type of epimer found in sugar molecules. Anomers differ in 3D arrangement at the anomeric carbon, which is a carbon atom found in the carbon chain of reducing sugars. The anomeric carbon has hemiacetal or hemiketal bonds with both of its attached oxygen atoms. Anomers regularly switch between anomeric forms in a process known as mutarotation, which eventually will result in a mixture equilibrium of anomers specific to each sugar. Many examples of epimers can be found, especially in biological molecules and in drug molecules. This is because biological molecules and drug molecules tend to be large and complex.

What is meant by 'epimerization'?

Epimerization refers to the conversion from one epimer of a molecule to another. This can happen spontaneously (which is typically a slow process) or be catalyzed by a group of enzymes known as isomerases.

What are epimers and anomers?

What are epimers with examples?

Epimers are molecules with at least two stereocenters that differ in 3D structures at some, but not all, of their stereocenters. Some examples of epimers include anomeric forms of sugars, other sugars that are not anomers (such as D-glucose and D-galactose), the different 3D structures of the amino acids isoleucine and threonine, and the drugs doxorubicin and epirubicin.

Enantiomers Overview & Examples | Do Enantiomers Have the Same Chemical Properties?

What Is the Ectoderm? | Ectoderm Function & Derivatives

Lactose Structure, Intolerance & Molecule | Is Lactose a Disaccharide or a Carbohydrate?

What is a Workbook in Excel? - Characteristics and Options

Asymmetric Carbons Overview & Examples | What is a Chiral Carbon?