Elizabeth Diehl, Cynthia Burton, Jennifer Levitas
What are Erikson’s stages of development? Learn about Erikson life stages, psychosocial development theory, and the history and contributions to the theory. Updated: 06/22/2021

Erikson's theory of psychosocial development looks at each life stage in a person's life as a crises for the individual to solve before advancing to the next stage. There are eight stages, that stretch out across the lifespan. These stages are influenced by biological, psychological and social factors in the individual's lifetime.

Erikson had a long life of influence on concepts related to human development, psychology and faith. It is also interesting to note that Erikson's works continue to have a deep influence on modern theory of psychological development, yet he never earned a doctorate degree.

Erik Erikson was born in 1902 in Austria. In 1927, Erikson began teaching at a small school for the children of students in the Vienna Psychoanalytic Institute. This school was founded by Anna Freud, Sigmund Freud's daughter. Through interactions with Freud, he became interested in the field of psychoanalysis, and especially in Anna Frued's research in working with children. Erikson married Joan M. Serson in 1930. Joan was a dancer, with an interest in learning about education and writing. In 1933, Erikson graduated from the Vienna Psychoanalytic Institute. When Hitler rose to power, the family decided to move to the United States, in 1933. Erikson remained in the United States for the rest of his life and worked in prominent universities, such as Harvard, Yale and Berkeley, while he continued to explore and expand his research of child development. Joan worked as his editor and supported his efforts to explaining his theories until his death in 1994.

Erikson had always enjoyed working with children and had learned the practice of psychoanalysis with children from his time at the Vienna Psychoanalytic Institute. While in the United States, he maintained a private practice and worked as a professor at various prestigious universities. Erikson was interested in how culture affects psychological development in children, so in 1938 he observed Sioux children at the Pine Ridge reservation in South Dakota. Erikson was able to use observations and ideas gleaned from studies in art, anthropology and the leading ideas of psychology at the time to create his own theory of psychosocial development.

In the 1940s, Erikson started writing his ideas as a series of essays that were eventually compiled and printed as a book titled Childhood and Society in 1950. His wife Joan was his editor. His book was surprising to the psychoanalytic world. While the line of thought for Freudian psychoanalysis was that a person's personality was decided and formed by age five, Erikson's theory suggested that instead a person experiences crises throughout their lifetime that affect and shape their personality. Also, while each individual must experience these same crises, each culture has its own influence on how these crises are solved.

Erikson expanded and even introduced new ideas to what Sigmund Freud had identified as important life stages, such as adolescents experiencing challenges to their identities. How a person handles each stage's challenge prepares them for the next stage. Each crisis shapes the person throughout their lifetime. While Freudian tradition focuses on the individual focusing on controlling their impulses and finding gratification, influencers such as Erikson explored how society shapes and impacts the individual through those impulses. Erikson framed his stages of psychosocial development as the individual having a chance to learn one of two outcomes. 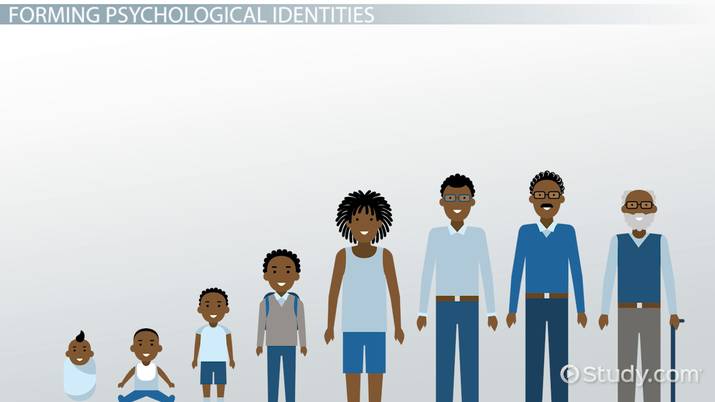 Coming up next: Intro to Personality

The 8 Stages of Psychosocial Development Theory and Examples

Each of Erikson's life stages is defined with the central crisis that the individual must experience. The stages are presented as two ideas that are conflicted, such as Trust Vs. Mistrust. It is up to the individual how they tackle the challenges and problems, and what they learn from it. If the person fails to master the positive attribute of the stage, they have learned the negative attribute. When they have mastered one stage, they progress to the next one.

From birth until 18 months, infants are learning about trust and mistrust. In this stage, the infant needs their basic needs met, and they need to know that their caregivers will respond if they cry out. A baby will learn to trust her caregiver will pick her up and feed her when she is hungry, but will become anxious when her needs are not met.

In this stage, the young child (18 months to 3 years old) is focused on learning how to care for themselves. A young toddler selecting clothes from the dresser all by himself is a good example of this stage.

Children in the play stage, ages 3 to 6, learn through play, and try out new ideas as they explore who they are. They need their caregivers to foster and encourage their interests. If a child decides she wants to learn how to play soccer and she kicks the ball around the backyard, she is showing initiative.

When children enter grade school, they are entering the school age stage as well. This stage encapsulates ages 6-12. Children learn about the skills related to being successful, as well as learn about ways they might not feel successful. A child being proud because he earned the honor roll has learned about industry.

Adolescence, ages 12-18, means exploring who the individual is apart from their family and other influencers. Adolescences might focus on extracurriculars that they enjoy, and find their sense of identity in that group.

Young adults, defined as ages 19-40, are focused on finding others to stay close to, such as really strong friendships, as well as life partners. When a couple decides to move in together, they are demonstrating the stage of intimacy.

In this stage, from 40-65, the individual looks to encourage the next generation, or become self-absorbed. This is the life stage where many people become parents. An adult who decides to volunteer at the local elementary school is demonstrating the stage of generativity.

Old age, from 65-death, is the time to pause and reflect on one's life, and share what they learned with others. An example would be a woman writing her memoir for her children.

Critics point out that while Erikson's theory of psychosocial development of each of the life stages is descriptive, it does not explain why these life stages move from one crisis to the next. Nor does Erikson provide key signals that the person has achieved mastery on a stage and is ready to move to the next. Nevertheless, Erikson's theory continues to be influential in the science of psychology. After Erikson's theory, psychologists have examined and studied development in adult stages, including old age. By linking universal social experiences with development of personality, Erikson provided a framework that helps people understand events in their lives. Many people can relate and provide examples in their own lives of the psychosocial development stages. Mental health providers use his stages to help patients understand times of transition and difficulty.

Erik Erikson developed 8 stages in his theory of psychosocial development, that explores how events affect a person's personality over a lifetime. His ideas expanded the Freudian tradition relating to understanding human development to include stages that explored the central crises in each life stage, such as adolescence and old age. Erikson's theory continues to influence the field of psychology.

The Erikson Life Stages are:

As you learned in the lesson, identity is the primary psychosocial developmental task in adolescence. Identity has many facets—political identity, sexual identity, religious identity, personal identity, and so on. Choose one type of identity that resonates with you and reflect on how it developed in your adolescent years. How did you develop that identity? Did you ''try on'' different identities before deciding on that one? Did your parents significantly influence your identity? Did any significant events happen to help you choose that identity? Write a journal entry consisting of 2-3 paragraphs writing down your thoughts on how your identity developed.

For this activity, say you are an elementary school teacher. You understand that the children in your class are experiencing a psychosocial conflict between industry and inferiority. Your desire as their teacher is to help them traverse and exit the stage strongly on the side of industry. Develop a rough lesson plan, writing down five points or ideas for activities that you think would aid in helping them develop industry. For example, you may ask the children to each choose a topic of interest on which to do a project, then have them present the project to the class. In so doing, they will develop a sense of industriousness and proficiency.

What is Erik Erikson's theory?

Erikson's theory of psychosocial development is that an individual's personality changes over time in response to the crises they encounter through their lifetime. These crises are universal and can be examined as 8 stages.

What are Erikson's 8 stages of psychosocial development?

The 8 stages of psychosocial development are: Trust vs Mistrust, Autonomy vs. Shame or doubt, Initiative vs. Guilt, Industry vs. Inferiority, Identity vs. Identity Confusion, Intimacy vs. Isolation, Generativity vs. Self-absorption, and Integrity vs. Despair.

What are Piaget's Stages of Cognitive Development?

How to Elicit a Patient's Health History

Autonomy vs Shame & Doubt in Erikson's Theory of Psychosocial Development