The term erythrocytes is another word for red blood cells. This medical and biological term is derived from ancient Greek and breaks down into erythro, meaning "red," and cyte, meaning "cell". Erythrocytes are defined as mature human red blood cells that maintain a biconcave (concave on both sides) discoid shape and do not contain a nucleus. 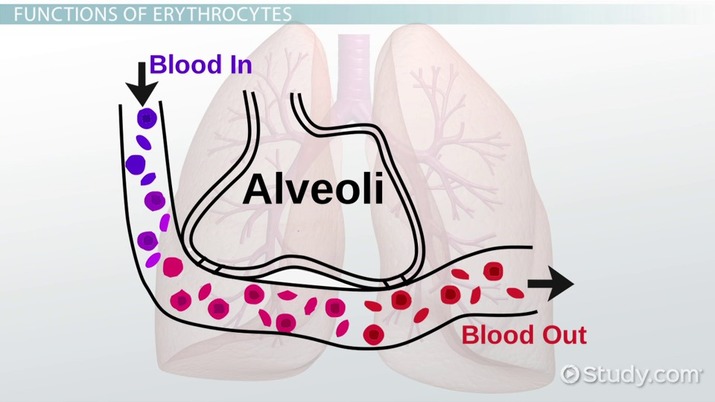 Coming up next: What is a Hematoma? - Definition, Types, Symptoms & Treatment

The major function of erythrocytes is gas exchange and transportation. They shuttle oxygen from the lungs to various cells and tissues in the body. They also remove carbon dioxide from cells as a waste product and deliver them back to the lungs for exhalation.

Red blood cells have unique characteristics due to their shape and color. Erythrocytes get their red hue from an iron-containing molecule called heme. When heme's iron is bound to oxygen, it has the ability to absorb blue-green light while reflecting red-orange light. This is why oxygenated blood appears bright red to the human eye. When the iron in heme is bound to carbon dioxide, the same phenomenon occurs except the color is a much darker red. The bluish color that appears in human veins is more of an optical illusion rather than a result of deoxygenated blood. Since blue light's shorter wavelength cannot penetrate human tissue as deeply as red light's longer wavelength, blue light is more likely to be reflected from veins closest to the skin.

The structure and composition of erythrocytes make them extremely efficient at transporting oxygen. Mature erythrocytes are the only cells in the body without a nucleus; however, a nucleus is present in the beginning stages of red blood cell formation. As maturation continues, the nucleus is lost after the cell divides asymmetrically with one portion containing the entire nucleus. This portion is then swallowed by macrophages (a type of white blood cell). When a red blood cell loses its nucleus, it has been anucleated. The absence of a nucleus frees up space to carry and deliver more oxygen.

Red blood cells have the ability to transport oxygen and carbon dioxide because they contain hemoglobin. Hemoglobin is a protein made up of four subunits. Each subunit has an iron-containing heme group that binds and carries one oxygen molecule made of two oxygen atoms. Because hemoglobin has four subunits, it has the ability to carry up to four oxygen molecules. One red blood cell contains approximately 250 million hemoglobin. This means that just one erythrocyte has the potential to deliver approximately one billion oxygen molecules in just one pass.

Erythrocytes are made in the bone marrow. Specifically, they are made in red marrow found in the center of most bones. Red marrow contains stem cells that eventually mature into a variety of cells like erythrocytes, white blood cells, and platelets. Because erythrocytes were designed to travel throughout the cardiovascular system, mature cells are easily released from the bone marrow and into the blood.

An erythrocyte's lifespan in an adult human is approximately 120 days. Throughout its lifespan, the cellular membrane sustains significant damage due to extensive travel through the circulatory system. Once again, macrophages are ready and waiting to play their role in phagocytosis: the act of ingesting or swallowing a specific object. After being entirely consumed by a macrophage, hemoglobin is broken down into amino acids, and the iron from heme is recycled and sent back to the bone marrow for new erythrocytes. The heme group is metabolized, modified, and eventually excreted through the urine and feces. The entire process of consuming and breaking down a red blood cell is called eryptosis and typically occurs in the spleen.

Erythrocytes are produced in the bone marrow. The process of red blood cell creation is called erythropoiesis. Erythrocytes are formed from progenitor (ancestor or parent) cells in red marrow. The kidney produces a hormone called erythropoietin, which travels to the bone marrow and controls the maturation process of these progenitor cells. A mature erythrocyte is formed after several cellular generations.

Healthy erythrocytes are vital to human well-being. The following disorders can occur as a result of abnormal erythrocyte number or structure:

The word erythrocyte is the medical and biological term for a mature red blood cell. Erythrocytes are responsible for carrying oxygen from the lungs to their target cells and tissues. They also carry carbon dioxide as a waste product from the tissue to the lungs so that it can be exhaled. Erythrocytes are bright red, biconcave, and anucleate (without a nucleus). Their smooth, concave, and pliable nature makes them proficient in navigating the circulatory system. Red blood cells contain a protein called hemoglobin. Hemoglobin is made up of four subunits, and each subunit contains a heme group. The iron in heme is what binds oxygen and produces a red color.

Erythrocytes are made in the bone marrow during a process called erythropoiesis. Old or damaged erythrocytes are destroyed in the spleen during a process called eryptosis. Both the production and destruction of erythrocytes involve phagocytosis, in which macrophages consume a part of or all of the cell, respectively. A lack of healthy blood cells can produce a variety of disorders, including anemia, polycythemia vera, sickle cell anemia, and pernicious anemia. Pernicious anemia is characterized by macrocytosis: the presence of abnormally large erythrocytes. All of these conditions exhibit some form of hypoxia or low oxygen blood levels.

What does it mean when erythrocytes are low?

This means that the number of healthy red blood cells in the body is lower than needed. This could be a symptom of general anemia, sickle cell anemia, or pernicious anemia.

What are the two main functions of erythrocytes?

The two main functions of red blood cells are gas exchange and transportation. They bring oxygen from the lungs to target cells and tissues. They also bring carbon dioxide from cells back to the lungs for exhalation.

What is another name for erythrocyte?

What does it mean when erythrocytes are high?

This means that the number of red blood cells in the body is higher than usual. It is a symptom of the genetic disorder polycythemia vera.

What are erythrocytes in blood?

Erythrocytes are mature red blood cells. They have a biconcave shape and no nucleus. Their pliable nature helps them move throughout the cardiovascular system.

Uterus Overview & Function | What is a Uterus?

What Are Leukocytes? - Definition, Types & Function

What is Leukocytosis? - Causes & Types