Copyright
Haripriya Munipalli, Terry Dunn
Understand the definition of aestivation in zoology, know the purpose of aestivation, discover examples of animals that aestivate, and learn the difference between aestivation and hibernation. Updated: 11/30/2021

The aestivation definition in zoology means slowing down of the activity and metabolism during a hot and dry season (such as summer). It is a prolonged and deep torpor (maintenance of body temperature) during the hot and dry summer. It is also called summer dormancy.

Aestivation is a means of avoiding environmental stresses. Another form of aestivation is exhibited by animals to act against heat stress. This is observed more frequently in ectothermic (cold-blooded) animals than in endotherms. In both cases, the triggering event for aestivation is the combination of high temperatures and water shortage. The location for aestivation for insects might be outside the residence zone when the climate permits breeding. In the next season, they come back to the breeding place and lay eggs. The migration distances might be very far.

Lungfish bury themselves and get encased in a mucous sheath that hardens gradually. They spend the dry season here when the waterline reduces and the lake bed dries out. Fish enter into the aestivation period when their metabolism, respiration, and heart rate decrease to very low levels. Their falling oxygen requirement enables the lungfish to survive without food or water for a few months or years until the water is restored.

Aestivation is a prolonged rest in some species. Aestivating mammals regulate their metabolism, although the effects are not exactly as great as they are with hibernation.

Animals that aestivate do not exist in a deep state of dormancy and might reverse back to normal if the need arises. Some snails, such as the milk snail (Otala lactea) native to North Africa and Europe, have the ability to reverse back from dormancy in just 10 minutes. Aestivation plays the role of conserving water and energy. The physiological processes the animals go through in aestivation are similar to hibernation. Aestivation involves the usage of stored energy, dealing with products containing nitrogen, and the stabilization of body organs.

The period of dormancy is characterized by the reduced metabolic activity of the animal. The dry environment that stimulates this kind of condition normally occurs during the summer. Research suggests that the evolution of this process in both aquatic and terrestrial animals might have occurred millions of years ago. Invertebrates and vertebrates aestivate during the summer to avoid excess water loss or extreme dryness.

Numerous species in phylums Mollusca and Arthropoda go through this process. Many aestivation examples from the phylum Mollusca are from the class Gastropoda, which covers land snails. The snails of this class climb up plants and reach shaded areas to aestivate. These kinds of animals are found in locations where there are bushy or crop trees as well as in forested areas. Usually, farmers have a troublesome time with the crops on which these snails climb for aestivation. To avoid loss of water, a few of the land snails release a substance that synthesizes a membrane to close their shells.

Members of two classes of Arthropoda called Insecta and Crustacea also undergo aestivation. The Insecta class includes mosquitoes, lady beetles, bogong moths, false honey ants, adult alfalfa weevils, and others. All of these show reduced activity during the summer. In the Crustacea class, the Austrothelphusa transversa (freshwater crab) moves to underground regions for aestivation purposes during the summer period.

Among vertebrate animals, the reptiles, fish, amphibians, and mammals aestivate. Reptiles and amphibians include desert tortoises, salamanders, and crocodiles. These animals aestivate at places where the temperature is very low (such as underground). In the case of the red-legged frog of California, aestivation occurs when food and water levels are very low and not necessarily in the summer. Another example is the water-holding frog that aestivates by moving underground during the summer in a watertight layer. Some Australian aborigines squeeze water from the frogs in the summer (which can kill the frog). The African lungfish is another animal that aestivates. There are also rare mammals that can aestivate, including the fat-tailed dwarf lemur and the African hedgehog. 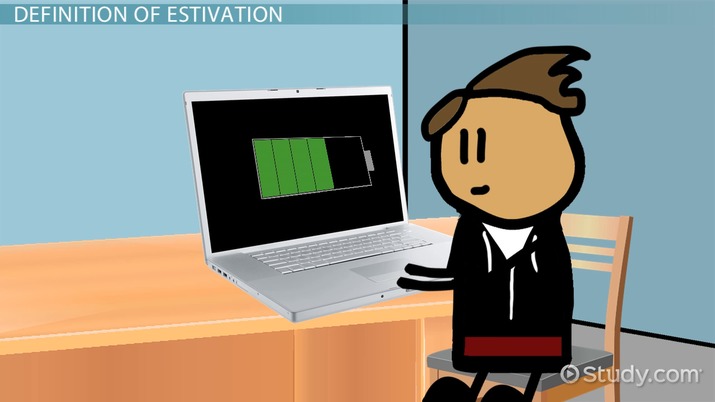 The inactive state and low metabolic process found in animals during the winter is known as hibernation. It is also called winter sleep. If animals take a rest in shady places during summer, it is called aestivation (also called summer sleep). Winter and summer sleep is mostly related to the conservation of energy in the body, with the organism trying to survive extreme temperatures and a scarcity of water and food. Hibernation or aestivation can be of short or long duration. In such periods, the animal's body uses less energy (about 70 to 100 times less). Before getting into either hibernation or aestivation, animals store sufficient food and water in the form of fat.

Hibernation is performed for the entire winter while aestivation is performed for a short period of time. In hibernation, animals look for warmer locations. In aestivation, animals look for moist and cool locations. Some of the animals that undergo hibernation include insects, birds, mammals, and bats. The animals that undergo aestivation include earthworms, frogs, bees, snails, salamanders, tortoises, and crocodiles.

During hibernation, animals wake up at a few intervals to feed themselves and then return to the same state to get some warmth. Aestivation is performed by animals living in the desert or tropical areas. Aestivation occurs due to a dry, hot climate and lack of food and water.

Many mammals and birds reduce their expenditure of energy during times of cold exposure and/or food shortages by temporarily abandoning euthermia, which is the maintenance of high body temperatures. Two types of heterothermy states are defined conventionally. Heterothermy means the animal experiences a hypometabolic state (the metabolic rate is low) and low body temperatures (torpor). One of these is a daily torpor that lasts for less than 24 hours and is accompanied by continuous foraging (searching for food). Another is hibernation where the torpor bouts extend from a few days continuously to many weeks in animals that normally do not forage (search for food). It occurs in animals that depend on energy stores such as food storage or body energy reserves.

Aestivation is a state of dormancy into which an animal enters during hot and dry periods. During this time, the animal has reduced activity and a reduced metabolic rate. The dry conditions that trigger this kind of dormancy usually happen in summer. Both invertebrates and vertebrates are known to undergo this process of aestivation during the summer months to protect themselves from desiccation (loss of moisture). An organism in aestivation may not appear to be in the deep state of dormancy as it will be able to reverse the condition if any need arises to get back to its normal previous body state.

Examples of aestivation are available in both invertebrates and vertebrates. Land snails, lady beetles, mosquitoes, bogong moths, false honey ants, and adult alfalfa weevils are some of the crustaceans and gastropods that aestivate. Some examples from vertebrates include reptiles, amphibians, fish, mammals, tortoises, salamanders, and crocodiles. One fish that aestivates is the African lungfish. Contrary to aestivation (which keeps the body cool), maintenance of high body temperatures happens in heterotherms. Hibernation is one such state experienced by organisms protecting their bodies from extreme winter. Daily torpor is one such hypometabolic state that lasts less than 24 hours.

What is the difference between hibernation and estivation?

What animals use estivation?

Animals that want to regulate their body temperatures during hot and dry summer and avoid water loss go through the process of aestivation. They also attempt to overcome a lack of food and water by being dormant for a certain period of time. Certain gastropods and mollusks as well as some reptiles, mammals, fish, and amphibians use aestivation. This group includes land snails, lady beetles, turtles, and mosquitoes.

Range of Tolerance Overview & Examples | What is Tolerance Range?