What is False Imprisonment?

There are numerous examples of false imprisonment. One of the most common scenarios is the shopping store scenario. If a random shopper suspects a fellow shopper of shoplifting and detains them, this would be an example of false imprisonment if the victim was innocent. The offender would, in this case, be liable for false imprisonment because although they had probable cause, they did not have the legal authority to detain the victim. However, this incidence should not be deemed unlawful imprisonment if the person detaining the alleged shoplifter was the storekeeper, store attendant, or store security guard. These three individuals, by law, have the authority and justification for detaining the victim regardless of the outcome.

A second scenario would be a police officer detaining a male African American individual without reasonable cause. If the police officer fails to provide valid grounds for detaining the person, this should be classified as false imprisonment. While the officer has the legal authority to detain individuals, they lack legal justification. Therefore, the officer has exceeded or abused their power to detain said individual, especially if the individual turns out to be innocent. The officer would not be guilty of false imprisonment if, for example, they detained the individual on suspicions of harboring drugs based on valid observations of their behavior.

As noted earlier, false imprisonment or unlawful confinement is classified as a tort or crime. The severity and the nature under which the offense is prosecuted vary from state to state in the U.S.A. For instance:

Although there are significant deviations in how state laws perceive the severity of false imprisonment, the offense tends to have three essential elements a plaintiff can use to prove a claim:

Suppose these arguments are proven beyond a reasonable doubt. Then, the court will gauge whether the defendant had reasonable cause to detain the victim and the damages accompanying the false imprisonment claim. 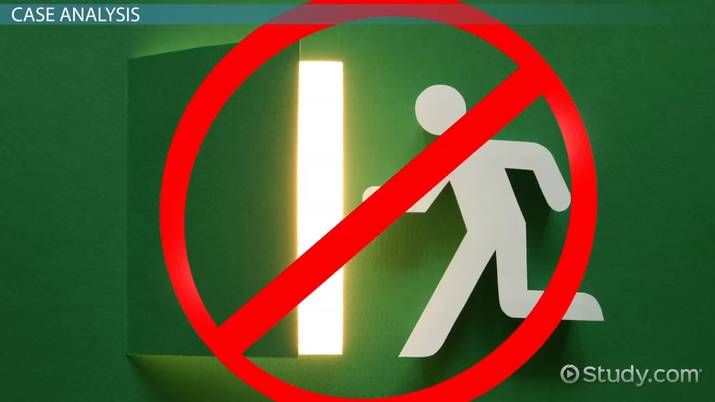 Try it now
Back
Coming up next: What Is Kidnapping? - Definition, Facts & Statistics

At over 2 million, the U.S. prison population is the largest globally. It is, therefore, statistically probable that a significant number of U.S. inmates are victims of false imprisonment charges. Whether it be overzealous crackdowns or unfair treatment of racial minorities, it is clear that wrongful convictions are indeed a common cause of false imprisonment.

Over the years, various false imprisonment charges have led to appeal cases that ultimately exonerated victims. Many of these individuals had suffered the ignominy of wrongful convictions resulting from false imprisonment. In Henry Lee McCollum v. North Carolina, Buddy McCollum was wrongfully convicted of rape and murder. He received the death penalty despite his intellectual disability. Furthermore, in 2014, new DNA evidence exonerated him and his brother of the heinous crime. The courts found that the previous ruling failed to account for North Carolina's appellate proportionality review for its death penalty scheme. Buddy was, in effect, sentenced disproportionately considering his mental fragility, thus signifying abuse of due process by the sentencing court.

Another significant false imprisonment case is Walter McMillan v. Monroe County, Alabama. Walter McMillan sued the county Sheriff and, by extension, Monroe County for coercing false eyewitnesses to testify against him. He was sentenced to the death penalty, where he would spend six years on death row. The plaintiff and his legal team discovered a tape recording containing evidence of coercion, which, when taken to the Alabama Court of Criminal Appeals, led to his dismissal. The court found that Monroe County was liable for any of its policies that led to constitutional torts. They considered the Sheriff a state actor, and thus his actions amounted to a constitutional tort. Furthermore, the evidence of coercion proved an abuse of process and official indifference to innocence beyond a reasonable doubt. These abuses amounted to a lack of justification and exceedance of authority.

False imprisonment is when one party intentionally and unlawfully detains another without just cause or the legal authority to do so. There are three elements to consider when proving false imprisonment cases; unlawful intent from the offender, the victim's lack of consent, and the offender's lack of authority to detain. However, certain parties such as shopkeepers and security guards can exercise privilege in such instances regardless of whether consent is available, provided that they have reasonable cause to detain. False imprisonment can be prosecuted under tort law or criminal law. Under tort law, the victim may seek to recover damages for any emotional, psychological, or physical harm inflicted during the false imprisonment. Under criminal law, the offender is tried as a criminal. This crime is either a felony or misdemeanor, depending on the severity of the offense and jurisdiction where the offense occurs. Unlike kidnapping, false imprisonment often happens in a bounded area, meaning that the victim remains captive in a single location, more often than not, a public space.

What does it mean when someone is charged with false imprisonment?

Can a false imprisonment charge be dropped?

False imprisonment charges are challenging to drop. The defendant might attempt to file for dismissal of the charges, but as long as the three elements of false imprisonment (unlawful intent from the offender, the victim's lack of consent, and the offender's lack of authority to detain) are proven, the court will be more likely to rule in the plaintiff's favor.

Libel Examples & Cases | What is Libel?