What Is the 15th Amendment?

What Did the 15th Amendment Do?

Passed by Congress on February 26, 1869, and ratified on February 3, 1870, the 15th Amendment gave the right to vote to United States citizens regardless of race, color, or former enslavement in its first section. The second section of the amendment gave Congress the right to enforce the law allowing all races and formerly enslaved people to vote. 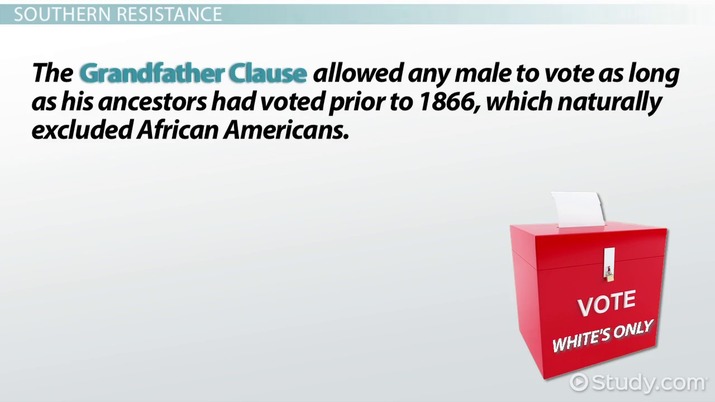 Coming on the heels of the Civil War, the abolishing of slavery, and the Reconstruction period, the 15th Amendment was a significant advancement in what would become the Civil Rights Movement. The Suffrage Movement had begun as well. This movement advocated for the right to vote for both women and African Americans. Leaders like feminist Susan B. Anthony and abolitionist Frederick Douglass were at the forefront of those voicing the need for social and political advancement.

Slavery and the Civil War

The Virginia Slavery Debate of 1831-1832 occurred after abolitionist Nat Turner led a revolt in Southampton County, Virginia on August 21-22, 1831, that led to the murders of 58 white men, women, and children, making it the most deadly rebellion to date. Virginia's state militia, called to arms by Governor John Floyd and supported by military units from North Carolina, ended the rebellion. They executed 120 African Americans with no trial; they captured Nat Turner on October 30, 1831, and hanged him on November 11, 1831.

On December 6, 1831, Virginia Governor John Floyd appealed to the General Assembly for stricter laws governing slaves and for the colonization of free Blacks. On December 14, 1831, William H. Roane took a completely different direction than Governor John Floyd; he requested permission to read two anti-slavery petitions to the House of Delegates, beginning the debate. On January 25, 1832, after several months of deliberation, the House of Delegates voted against emancipation.

While the North was lobbying for emancipation, the South was concerned for their economy, which was based on farming performed by the enforced labor of enslaved people. As a result, 13 southern states seceded and formed the Confederate States; the remaining states were known as the Union States. On April 12, 1861, Confederate soldiers fired the shots that began the Civil War at Fort Sumter in South Carolina.

The Confederate States were:

'"Four score and seven years ago our fathers brought forth on this continent, a new nation, conceived in Liberty, and dedicated to the proposition that all men are created equal.

Now we are engaged in a great civil war, testing whether that nation, or any nation so conceived and so dedicated, can long endure. We are met on a great battle-field of that war. We have come to dedicate a portion of that field, as a final resting place for those who here gave their lives that that nation might live. It is altogether fitting and proper that we should do this.

But, in a larger sense, we can not dedicate -- we can not consecrate -- we can not hallow -- this ground. The brave men, living and dead, who struggled here, have consecrated it, far above our poor power to add or detract. The world will little note, nor long remember what we say here, but it can never forget what they did here. It is for us the living, rather, to be dedicated here to the unfinished work which they who fought here have thus far so nobly advanced. It is rather for us to be here dedicated to the great task remaining before us -- that from these honored dead we take increased devotion to that cause for which they gave the last full measure of devotion -- that we here highly resolve that these dead shall not have died in vain -- that this nation, under God, shall have a new birth of freedom -- and that government of the people, by the people, for the people, shall not perish from the earth."'

On January 31, 1865, Congress passed the 15th Amendment to the United States Constitution, abolishing slavery and giving Congress the power to enforce this law. The amendment was ratified on December 6, 1865. It was written in two sections:

General Robert E. Lee, commander of the Confederate Army, surrendered to General Ulysses S. Grant, commander of the Union Army, at Appomattox Courthouse on April 9, 1865, ending the Civil War and ushering in the Reconstruction Era.

The fallout of the Civil War necessitated a period of reconstruction from 1865-1877. The economic, social, and political consequences of the abolition of slavery and the reconstruction of homes and businesses had to be engineered. After the assassination of President Lincoln, Andrew Johnson became President of the United States and formally began the Reconstruction Period, of which the 13th Amendment was a part. With the expansion of American civil rights, the Civil Rights Movement did not begin until the 1960s.

The Ratification of the Amendment

By the 15th Amendment definition, all races and formerly enslaved people had the right to vote. This amendment was ratified on December 6, 1865, further validating its authenticity and legal authority. Former Confederate states were required to ratify the amendment as well, as their readmission to the United States depended on it as a condition. Going forward, slavery was banned not only by the United States of America but also by any territory under its jurisdiction.

Why Is the 15th Amendment Important?

In terms of the Civil Rights Movement, the 15th Amendment was a progressive beginning to a necessary evolution. After slavery was abolished and reconstruction had gained a solid footing, the country was free to move forward in its quest for equality for all, for a more peaceful nation, and for a government whose true purpose was to oversee and protect the country and its people.

The significance of the 15th Amendment was its presentation of equal voting rights to people of all races, legally ending racial discrimination in voting. The main point of the 15th Amendment is that, throughout the Slavery Debate, the Civil War, and the country's Reconstruction Era, America fought for the freedom of all enslaved citizens and claimed a victory that began monumental strides in the progression of civil rights for everyone.

Some terms and concepts related to the 15th Amendment include:

The 15th Amendment says United States citizens cannot be denied the right to vote based on race, color, or previous servitude.

When was the 15th Amendment passed?

Why is the 15th Amendment Important?

The importance of the 15th Amendment is that it grants the right to vote to all American citizens regardless of race, color, or previous servitude.

The Issue of Slavery in the American Constitution

What is an Interest Group? | Types in the United States