Copyright
Andrea Taktak, Raymond Blockmon
What is FTP and its history? Learn the types and uses of FTP . What is the need of, and the working of FTP? Learn about FTP Clients and FTP Security. Updated: 12/31/2021

What is File Transfer Protocol?

File Transfer Protocol (FTP) - A protocol is a defined set of rules, and in the case of FTP, it is a specific set of rules used by a computer system to transfer files across the internet. FTP is different from traditional websites (Hypertext Transfer Protocol or HTTP). HTTP is designed to deliver text and images to be formatted in a layout for display via an Internet Browser such as Chrome, Safari, or one of many other browsers. 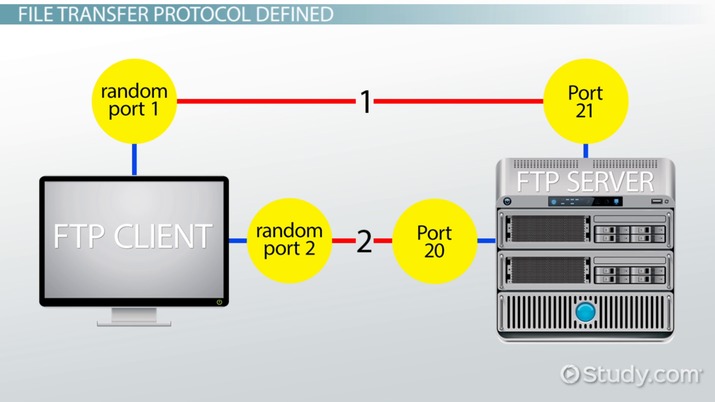 Coming up next: What is Hypermedia? - Definition & Systems

The original idea for File Transfer Protocol (FTP) was created by Abhay Bhushan on April 16, 1971. This original concept was designed on the Network Control Protocol (NCP). Later FTP was modified to use the TCP/IP protocol. This would allow it to be more flexible and be integrated for use with what would soon become the Internet as we know it.

In contrast to a traditional website where a domain is preceded with the www prefix, FTP uses the same domain and will have the FTP prefix. For example, a company that owns domain.com will host its web server at www.domain.com and its FTP server at ftp.domain.com. This prefix allows the company to direct traffic to specific ports, which also may, but don't have to, route traffic to separate servers.

There are several types of FTP connections:

What is FTP Used For?

FTP is typically used to transfer larger files from one computer to another. Typically these files are not sensitive in nature. The reason FTP is typically only used in larger files is that the time needed to create the FTP connection between the client and server can negate the time saving of the protocol when transferring smaller files.

A port is similar to a door on a building. Each door has a specific purpose. The main entrance of a building may be for customers, while the rear door is used for deliveries. Computer systems operate on a very similar concept, but these doors are called ports. FTP used two different ports in order to initiate and transfer a file. The first port is port 21. This port is used for the commands that are sent between the client and the server, and the most common port users are familiar with FTP. The second port is port 20. This is the port that the data is actually sent and received from. Once a user establishes their credentials with the server via port 21, the requested files are then sent out of port 20 from the sender to the receiver.

Differences between FTP, HTTP, and MFT

In its simplest form, File Transfer Protocol, FTP, is an unsecured connection between the client and a server. The FTP transmission can occur in several different forms, each having a specific advantage. There are two different types of transmission types, active and passive. There are different types of FTP which include Standard FTP, Password Protected FTP, Secure FTP, and FTP with SSL.

An FTP Client is a piece of software that the user will use to connect to the FTP server, which is located on a separate computer. The FTP client software can be used to send or Put files on the remote server, or they can receive or Pull files from the server.

When connecting to an FTP server, there are two modes that can be used: Active and Passive. An active FTP connection is one where the client will initiate a request for a file or connection and request that the data be transferred on a port designated by the client; with a Passive FTP connection, the server dictates which ports will be used for the file transfer. This is a more secure transfer as the server can be configured to transfer files only on ports that are secured by the computer administrator and which local firewall security has allowed communication on the port(s). If a server were to allow Active FTP, the client might dictate that a port be used that is not secure. This could create a potential security issue or may select a port in which the firewall is blocking, therefore not allowing the transmission of the file to occur.

FTP transmission will use one of two methods to ensure a successful transfer of data. These methods will either be TCP or UDP.

User Datagram Protocol (UDP) is a set of standards created to allow for the client and the server to transfer data with the least amount of latency possible. This protocol is typically used for streaming services where if a small bit of the transmission is lost or corrupted, the stream will continue on. When streaming a live broadcast such as a video call, UDP is used because if a few frames of the video are lost, it is more important to keep the video as close to live as possible versus waiting for the lost frames to be detected, requested from the sender, and then resent from the other computer, and then assembled. This process would cause a significant delay in the video call, and the client's computer would be forever behind the conversation without a way to catch up.

File Transfer Protocol FTP is considered to be an Insecure protocol as the usernames and passwords are transferred in plain text or unencrypted. The original design was not focused on security as much as ease and speed of transfer. Usernames and passwords are used to verify a connection and a user's permissions with the server, but if the internet traffic were to be intercepted, the information transferred is easily readable. Many applications exist to be able to listen to traffic being transferred across a network. Even wireless network traffic is susceptible to being listened to and viewed in plain text.

File Transport Protocol (FTP) is a commonly used client/server protocol used to transport files from one system to another, commonly using port 21 and port 20. FTP was originally designed as an unsecured transport method, but recent improvements have added layers of security. Users can get files from or put files on a remote server. There are two types of the file transfer. TCP ensures that all parts of a message are received despite slowing transmission and UDP which transmits the data as fast as possible, even though some bits of data may be lost. Today FTP exists in many forms to meet the needs of an ever-growing need for additional security.

What is FTP and how it works?

File Transport Protocol or FTP is a client-initiated transfer where the client can receive a file or can send a file to the server. The specific type of transmission, as well as the level of security, is determined by the server.

What is FTP and its types?

There are many types of FTP types:

Where is FTP used?

File Transport Protocol or FTP is typically used in business environments to send or receive larger files across a local network or the internet.

What is File Transfer Protocol used for?

File Transport Protocol or FTP is used to transfer larger files from one computer system to another across a local network or the Internet.

What is a DNS? - Definition & Explanation

What is Communication Protocol? - TCP/IP & Explanation

What are Newsgroups and Discussion Forums?

The Traveling Salesman Problem in Computation