What is Muscle Flexion Movement?

What does flexion mean? Flexion is a movement that is characterized by a decrease in the angle between two or more bones that form a joint. In simple terms, flexion involves bending a joint. For example, the elbow joint is created by the humerus (a large bone in the upper arm), ulnar (bone on the pinky side of the forearm), and radius (bone on the thumb side of the forearm). The biceps brachii is the muscle located at the front of the upper arm, and when this muscle contracts, it pulls the bones of the forearm upward. The upward movement of the forearm decreases the angle of the elbow, and this movement is known as elbow flexion. Elbow flexion is used in many daily activities, such as when a person bends their arm to bring a utensil to their mouth while eating. 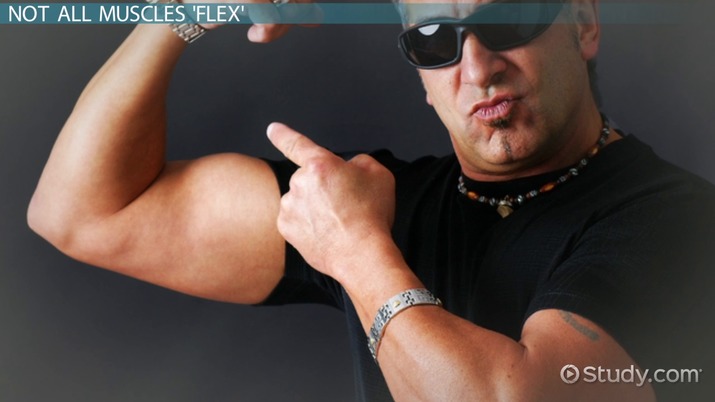 Coming up next: What is a Muscle Strain? - Definition, Causes, Symptoms & Treatment

As it was previously mentioned, flexion occurs when there is a decrease in the angle between two or more bones that form a joint. Additionally, flexion usually occurs in a non-horizontal motion. Some flexion movement examples include:

There are several exercises that involve flexion of a body part, and the following chart describes some of these exercises:

Flexion is a movement that causes the angle between the bones of a joint to decrease, such as when a person bends their elbow joint. Flexion movements occur in the sagittal plane (cuts the body into a left and right side) about the frontal axis (horizontal line that passes through the body from right to left). Horizontal flexion is a specific type of flexion that occurs horizontally. Exercises that involve flexion movements include bicep curls, leg curls, crunches, and shoulder front raises.

What is difference between flexion and extension?

What are the 5 types of movement?

What is flexion and extension movement?

What is an example of flexion?

There are several examples of flexion in the human body which include bending the elbow joint, bending the knee joint, and bending forward at the waist.

Adduction Exercises & Examples | What is Adduction?

Considerate Communication in the Classroom Environment

Tropomyosin Function | What is the Role of Tropomyosin in a Skeleton?

Hinge Joint Examples, Movement & Types | What is a Hinge Joint?