Jay Gregorio, Amanda Robb, Elaine Chan
Understand what force is and get to know the force equation. Learn about various types of forces, units of force, force formula, and the concept of net force. Updated: 03/04/2022

Force Definition: What is Force?

A force is a push or a pull. When a grocery cart is pushed through the aisle of the supermarket, the hands are exerting force on the cart. When the arrow on a bow is pulled, there is also a force applied on the bow. When a ball is thrown in the air, it comes down because gravity pulls on the ball. These examples show that a force can move objects. Specifically, a force can change the object`s speed, direction, or shape.

Forces help bring about a change of motion. When a skater moving at a constant speed is given a push from behind, the skater will move faster towards their original direction. The same skater may slow down when they encounter a hump on the road. The amount of force given to an object determines its motion. However, there are some situations where a force is applied, and the object does not move. For the discussions in this lesson, we will consider objects that move after a force is applied. 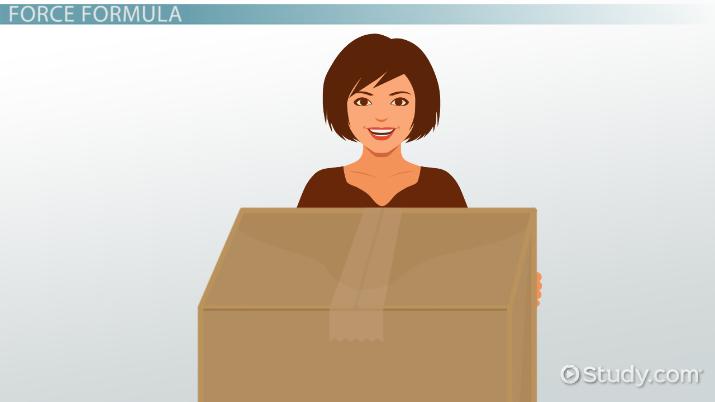 Try it now
Back
Coming up next: What is Physics? - Definition, Branches, Fundamentals & Topics

Unit of Force: What is Force Measured In?

The International System of Units (SI) defines a unit of force as the Newton with the symbol N. The Newton is related to three base units: the meter (m), kilogram (kg), and second (s). A meter is a unit of length, a kilogram is a unit of mass, and a second is a unit of time.

Using these base units, we find that:

There are many other equivalent units of force that can be used, especially in the English system. SI units are commonly used as the system has only one unit for each quantity.

The standard force formula is derived from Isaac Newton's second law of motion which states that the net external force on an object is equal to the product of its mass and acceleration. More succinctly, force equals mass times acceleration. In symbols, this can be written as follows.

where F is the force, m is the mass, and a is acceleration. Acceleration is defined as the rate of change in the object's velocity. Mass is the amount of matter in an object. Force and acceleration can be described by both magnitude (represented by a number) and a direction in space. Likewise, mass is described only in terms of magnitude.

We can calculate the net force if the mass of an object and the acceleration are known. When a 0.62 kg basketball is dropped from a height and accelerates at 10 m/s^2, we can use the formula {eq}F=ma {/eq} and find that the net force acting on the falling basketball is 6.2 kg m/s^2 or 6.2 N.

A free-body diagram is an illustration that represents all forces acting on an object. These forces are represented by arrows where the length shows the magnitude and the arrowhead points to the direction of the force.

There are a variety of forces that can be described based on how they interact with an object. A contact force requires that two objects are touching. When a button on the computer is pressed, the force exerted is a contact force. Likewise, there are forces that do not need contact to see their effects. Using a previous example, the basketball dropped from a height will fall to the ground because of the force of gravity even though there is no contact between the Earth and the ball as it falls. The four fundamental forces are the gravitational force, electromagnetic force, weak force, and strong force.

Gravitational force is one of the most familiar forces in nature. Classical physics defines gravitational force as the attraction between two objects. The saying `what goes up, must come down` describes the consequence of gravitational attraction between an object and the Earth. The Earth`s gravity is massive and therefore, smaller objects on its surface tend to be attracted towards its center. Weight is an example of a force due to gravity. It is caused by the Earth pulling our bodies towards its center. This force prevents us from flying off into outer space.

The weak force bears its name because of its lower intensity compared to other fundamental forces. It is a force that is unseen in daily life and exists at the subatomic level. The weak force accounts for the radioactive decay of certain subatomic particles. The weak force also plays an important role in the process called nuclear fusion where hydrogen fuses into helium. When two protons are very close to each other, the repulsion is strong, and overcoming this force requires an extremely high temperature. The weak force starts the process of burning hydrogen in the Sun that it uses to power itself. The weak force is, therefore, not weak after all. It helps produce the energy needed by most life forms on Earth.

A net force is the vector sum of all the forces acting on an object. Sometimes this is referred to as a resultant force. It shows how the combination of a force's magnitude and direction will affect the object it is acting on.

In a free-body diagram where a box experiences a force of 10 N to the left and 20 N to the right, the vector sum of the forces is:

Look at the second free-body diagram in the image. This time a box is experiencing a 15 N force to the right and another 30 N force in the same direction. The vector sum of the forces is:

The net force or resultant force is 45 N. If the acceleration of the box is 4.5 m/s^2, the mass can be calculated as:

A force is a push or a pull that can change the object's state of motion. The International System of Units (SI) unit of force is the Newton (N) where {eq}1\;N=1\;\frac{kg\;m}{s^{2}} {/eq}. The standard force formula states that the net external force on an object is equal to the product of its mass and acceleration. The force equation is {eq}F = ma {/eq} where F is the force, m is mass and a is acceleration. In other words, force equals mass times acceleration.

There are a variety of forces that can be described based on how they interact with an object. The four fundamental forces on Earth include the gravitational force, electromagnetic force, weak force, and strong force. Weight is an example of a force due to gravity. It is the force that pulls us down, towards the Earth. In solving Force problems, a free-body diagram, a diagram showing an object and all forces acting on it as arrows, is helpful for analyzing the magnitude and direction of the forces acting on an object. Once the net force or vector sum of all forces is determined, we can rearrange the force equation such that {eq}F=ma {/eq} can be {eq}a=\frac{F}{m} {/eq} or {eq}m=\frac{F}{a} {/eq}.

Here xo is the initial position and vav is the average velocity, which for an object at constant acceleration is ( vo + v )/2.

Multiply by the mass, to obtain -10524 Newtons of force in the direction opposite the initial velocity.

What is a force in science?

What is the basic equation for force?

The basic equation of force is F = ma which states that the net force acting on an object is equal to the product of mass and acceleration. In short, it is force equals mass times acceleration.

Force in Physics Characteristics & Examples | What is Force?

Applied Force | What Are The Types of Forces?

Newton Overview & Measurement | What is the Unit of Force?