What Is Forensic Toxicology?

Forensic toxicology is the field of forensics that determines when the ingestion of harmful agents or illicit drugs might lead to potential legal or criminal consequences. Forensic toxicology is a subcategory in the field of toxicology, which is the study of the harm that harmful substances might have on the human body. Many consequences might befall a person if they ingest a harmful agent. Illicit narcotics can cause intense physical harm and even death. Subsequently, the addiction may occur based on the use of these same illicit drugs is dangerous. Some chemical compounds are also harmful when ingested. Forensic toxicologists must determine the substances present and how they may have impacted the victim.

Instances Where Forensic Toxicology Is Used

Most commonly, forensic toxicology is used in the following settings: 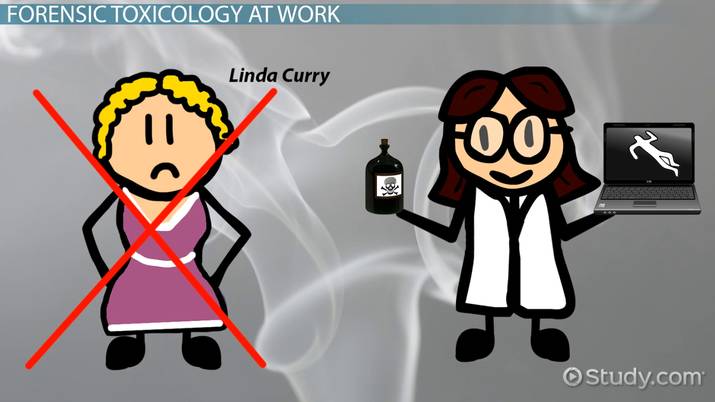 Try it now
Back
Coming up next: Alcohol Metabolism: Process & Effects

Forensic toxicology follows a fairly prescribed step-by-step process that begins when a sample is collected. Samples might be collected from a living subject in a lab setting, collected from a deceased subject, or collected elsewhere and provided to the toxicologist for testing purposes. Oftentimes, in investigations, pre-employment, or medical settings, there will be a chain of custody notation made on the sample itself or the envelope that highlights who had access to the sample being tested from the point of collection.

The type of sample might vary depending upon the type of toxicological testing being conducted. For example, blood testing can be used to detect the presence of alcohol within the bloodstream, as long as the body has not yet metabolized it. Forensic toxicologists can use the vitreous humor, the viscous liquid-type substance in the eye, to determine if alcohol was present in the body at the time of death, while the body may have already metabolized the alcohol content in the bloodstream. They will often use urine, blood, hair samples, or other biological materials to assess levels of toxicity in the body.

Other biological materials might include fingernail or toenail clippings, the contents from a deceased victim's stomach, pieces of bone or bone marrow, or spinal fluid which may be extracted through a lumbar puncture, otherwise known as a spinal tap.

Urine samples are the most common type of material tested in forensic toxicology. These samples are collected from both people who are alive and deceased. A benefit of testing urine samples is the amount of time it takes to be assessed, which takes much less time than assessing blood or hair samples. Many hospitals have the means to test a urine sample almost immediately after it is collected, which may aid in a patient's timely treatment.

Some drugs have a longer life in urine than others. For example, the presence of tetrahydrocannabinol (THC) in marijuana might last up to 30 days in the subject's urine whereas heroin might only last one to three days in the urine. Urine collection and assessment are commonplace in pre-employment and ongoing employment screenings mainly because it is easy to collect and affordable to test.

Blood samples are another common sample type in forensic toxicology. Often during an investigation, blood and urine samples will be collected simultaneously. Blood samples can be frozen, which aids in the preservation of the materials for testing. Blood-based testing is affordable enough to use as a preliminary assessment in forensic investigations. By assessing the blood of a deceased person, the medical examiner or coroner is better able to limit the types of tests required and thus has more fiscal control over the budgetary needs of an investigation.

A minimum of 20 millimeters of blood should be collected for most forensic toxicological needs. Foreign substances, even in trace amounts, can be detected in blood samples. However, this amount varies depending upon the type and number of tests required on a particular patient or case.

Hair samples are most often collected by plucking the hair, including the root, from near the back of the scalp. Chemicals are transferred from the bloodstream to the growing hair; this makes a hair sample a great choice to test for long-term exposures to narcotics or other harmful chemicals. Hair, on average, grows at a rate of approximately six inches per year. Often the presence of narcotics or other harmful heavy metals is present in the hair sample weeks or months after their ingestion.

Dark or coarse hair is more viable when performing tests on hair samples. It is theorized that many drugs bind to the melanin in hair, so black or dark brown hair provides better results than samples of blond or white hair. Chemicals can have an impact on degrading potential samples, so heavily processed hair might be less reliable than a sample of unprocessed hair.

Depending on the substance being assessed, other types of biological samples might be used in forensic toxicology applications. Some of these sample types include:

The forensic toxicology process is often performed after death, or postmortem, especially when the death is believed to be the result of suicide, homicide, or an unknown cause. A forensic pathologist collects the samples from the deceased person during the autopsy and sends these to a forensic toxicology technician.

It is important to note that the results of a person ingesting a harmful substance or illicit narcotic might not be the primary reason for their death. There are many examples of how this might be the case. For example, oftentimes during a suicide investigation, the technician might find that the person ingested harmful substances, such as alcohol or drugs, before the death, but the primary cause of death could be the result of asphyxia or blunt trauma, depending upon the implement the individual used to commit the act. Also, the ingestion of a particular drug could have incidentally caused the death. An example of this is when the ingestion of opioids causes death by asphyxia due to a lack of oxygen in the blood caused by respiratory arrest.

Toxicology is the study of the detection of chemicals and illicit substances in the human body. Forensic toxicology falls under this umbrella as it is the process of detecting harmful agents that someone has ingested and potentially leads to criminal or legal consequences. Primarily, forensic toxicologists are concerned with determining whether the presence of controlled substances is legitimate in a provided sample.

Forensic toxicologists use urine samples, blood samples, hair samples, and other biological samples to find evidence of toxicity during their inquiries. While investigations often involve deceased people, there are other instances when forensic toxicology might be useful. A professional athlete might be subject to forensic toxicological testing to determine if a stimulant present in their sample might have enhanced their performance in sports. Overall, the field is wide-ranging and often is associated with medical, employment, or investigatory capacities on a subject.

What is an example of forensic toxicology?

An example of forensic toxicology is pre-employment and ongoing employment substance screenings. Oftentimes, an employer will require applicants and employees to submit to drug testing that is conducted by a forensic toxicologist. Most frequently the sample will include urine, but some employers take the assessment a step further and require hair samples since some drugs can be metabolized quickly in urine samples.

What are the 3 primary concerns of forensic toxicology?

Fiber Analysis in Forensics | Why are Fibers Important to Forensics?

Elution Techniques & Examples | What is Elution?

Fiber Analysis in Forensics | Why are Fibers Important to Forensics?

Elution Techniques & Examples | What is Elution?