What is formalism in art? Understanding what formalism is requires looking into what it means for something to be a work of art. Many people have their own definitions of what constitutes art, and artists and critics have been arguing over this question for centuries. Formalism is one school of thought that seeks to define what art is and how it should be analyzed. In formalism, art is valuable because of its form and technique. The visual aspects of art, including the skill that the artist displayed in creating it, are the most important thing to consider when evaluating art. This formalism definition suggests that elements like composition, color selection, line work, and technique are what make a great work of art.

Formalism first developed in the nineteenth century when the art world was going through something of a crisis. The invention of photography had raised questions about the value of art: why should it be created? What made it good? What were the limitations of art? The formalists had one potential answer: art is about style and skill, and it is these formal qualities that set art, especially painting and sculpture, apart from other human creations. Formalists focused on the painting itself as an object of value, regardless of the painting's subject, its historical context, its emotional resonance, or its political and social commentary. All of these elements of a work of art, while not outright ignored, were considered secondary. Painter and writer Maurice Denis wrote about the importance of aesthetics in art, saying, ''Remember, that a picture, before it is a picture of a battle horse, a nude woman, or some story, is essentially a flat surface covered in colours arranged in a certain order.'' Denis' point about the value of art was taken seriously and went on to form the basis for a lot of formalist thought.

Because formalists did not think that historical context or specific meanings were important when producing art, they sometimes created pieces that were deliberately ambiguous, allowing viewers to come to their own conclusions about a piece's meaning. The following formalism art examples were either painted by formalists or highly valued according to formalist principles.

Piet Mondrian, who painted this piece, created art that was excellent according to formalist standards. It demonstrated deliberate and expressive use of line, shape, and color. It also did not specifically reference anything, allowing individuals to interpret the painting without requiring external context. Mondrian's work demands to be understood on its own terms.

This painting by James McNeill Whistler uses carefully applied colors and shapes to evoke an abstract image. Like Mondrian's work, Whistler's painting refuses to be contextualized, allowing viewers to see a variety of different scenes. According to formalist thought, it is not the content of the painting that matters, but rather Whistler's skillful use of the art form. 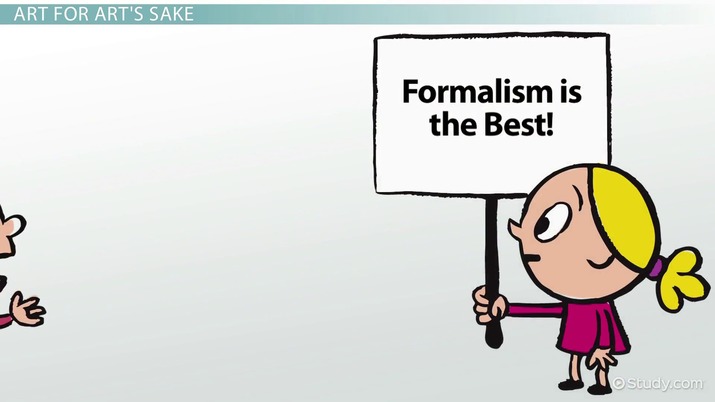 Try it now
Back
Coming up next: Contemporary Urban Life in Impressionist Paintings

A school of thought often placed in opposition to formalism is art for art's sake, meaning art that has intrinsic value on account of being art at all. Although the two schools of thought are different, they are not, strictly speaking, diametrically opposed. The phrase ''art for art's sake,'' sometimes rendered as the Latin version Ars Gratis Artis, actually originated as the French l'art pour l'art. Art for art's sake argues that the value of art is not tied to its subject matter, political agenda, ethics, or educational purpose. The idea behind art for art's sake was a rejection of earlier ideas about art, which suggested that the value of art lay in its adherence to religious doctrine, its moral goodness, and its conventional and acceptable subject matter.

Instead of using these older criteria, proponents of art for art's sake argued that each work of art should be analyzed on its own terms, absent typical considerations. A work's beauty was one element that was under consideration, as was its emotional resonance. Individual opinions on different works of art were valued, rather than categorizing art in a specific hierarchy from good to bad. Art could be good, these critics argued, even if it promoted unorthodox ideas or was out of step with fashions of the day, provided it connected with its audience and demonstrated good use of formal elements.

This illustration by Aubrey Beardsley, a member of the Decadent movement, shows Salomé with the head of John the Baptist. According to the philosophy of art for art's sake, the piece is valuable in and of itself based on its own aesthetics, absent any moral considerations. During this time, there was a heavy focus on painting aesthetically beautiful subjects, which meant that the concept of art for art's sake also overlapped with the Pre-Raphaelite Brotherhood.

According to Dante Gabriel Rossetti's philosophy and others who supported the idea of art for art's sake, an artist's reasoning for creating a piece, their personal history, and their political ideas were all immaterial when analyzing a work of art. Each work was valuable simply because it existed and any further consideration was based on the beauty and emotion of a piece, not its historical context.

Formalism and art for art's sake are sometimes considered opposite stances on art and it is true that they had their differences. Formalism advocated for a rational, scientific perspective on art, which was not present in art for art's sake. The painting itself, the physical object, was of primary importance to formalists, meaning that any given painting should first be seen as paint on a canvas before being seen as a crafted image. For formalists, the emotions that a piece evoked were secondary in artistic analysis, just like historical and social context.

In the case of art for art's sake, the formal technique was important, but so was aesthetic beauty and the emotional response that a piece evoked in the viewer. The value of art derived not from its formal accomplishments, but from the fact that it was art at all. In this way, formalism created a hierarchical view of art that challenged older ways of categorizing art as good or bad, while art for art's sake removed the idea of a hierarchy entirely, allowing for individual analysis of each work of art to hold equal weight.

Although they approached artistic analysis and criticism slightly differently, formalism and art for art's sake had a lot of similarities. Both were reactions against other ways of looking at art and both rejected the idea that a work of art's value came from its historical context, its artist's personal life, or its moral, religious, or political standpoint. As such, both formalism and art for art's sake were revolutionary ways of examining artwork in their day.

In the late nineteenth century, the invention of photography raised questions about the value of art and how to examine works of art. Two schools of thought arose, each giving its own ideas about how to tell good art from bad. Formalism argued that the value of art came from the artist's use of compositional elements like line, color, and technique. When analyzing a painting, a formalist might consider the use of lines to create spatial depth or the use of color in a piece, but the influence of the artist's childhood on the work would be of secondary concern.

The second school of thought was called art for art's sake. It argued that art was valuable simply by virtue of being art and that political, moral, or educational goals were not part of what made something a great work of art. Formal considerations, as well as aesthetics and the emotional weight of a piece, were the most important elements of artistic analysis for those who subscribed to the philosophy of art for art's sake. Though they had similar critiques of older ways of analyzing art, formalism and art for art's sake did differ in their approach to criticism. While art for art's sake appreciated the emotions of an art piece, formalism analyzed art from a rational, almost scientific perspective.

What does formalism mean in art?

Formalism is a specific kind of art criticism that first developed in the late 1800s. It suggested that the technical elements of a work of art were paramount when determining whether the art was good.

What are examples of formalism?

Painters who subscribed to formalist principles included Piet Mondrian and James McNeill Whistler. Their paintings required audiences to bring their own interpretations without being concerned with historical context.

What is the meaning of formalism in art?

Formalism in art refers to a heavy emphasis on technical and formal elements in art criticism. How the artist has used line, form, and composition is more important in formalist analysis than the subject or emotional quality of a work.

Try it now
Back
Create an account
Formalism vs. Art for Art's Sake | Overview, History & Examples
Start today. Try it now
Art of the Western World

The Tale of Genji by Murasaki Shikibu | Summary & Characters

As You Like It by William Shakespeare | Summary, Characters & Analysis

Marxist Ideology Principles & Tenets | What is a Marxist?

Mainstreaming vs. Inclusion in Special Education