What is the franking privilege? Franking privilege is a particular privilege that members of Congress and certain other select groups of people have that allows them to send mail free of charge through the United States Postal Service. The history of franking privilege dates back centuries and the practice still exists today, although reforms have been made over the years.

The term ''franking'' comes from the Latin ''francus,'' meaning ''free.'' While sending mail using franking privilege is free for an individual, the U.S. government actually reimburses the postal service for any franked mail sent by members of Congress or other officials. The franking of congressional mail has been the subject of controversy and is continuously being reviewed, with regulations changing as recently as 2020.

One important thing to note is that franking privilege does not apply to all mail. Regulations vary, but typically speaking, franking only applies to government information and business-related mail. It cannot be used for personal correspondence in most cases, and it also cannot be used for campaign-related mail. It allows members of Congress to communicate with their constituents about important matters. 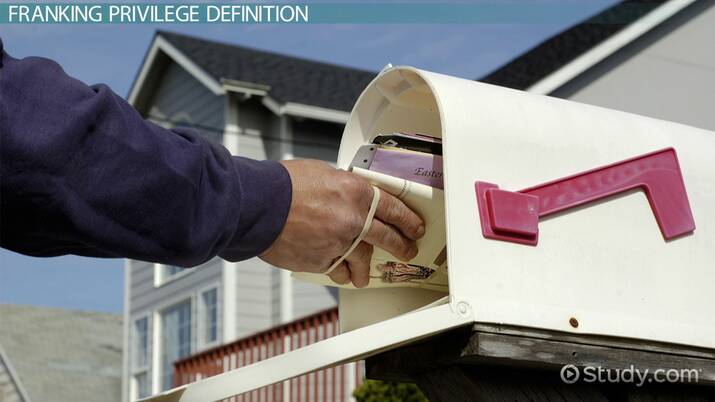 Franking privilege has a long history and it has seen many changes and reforms over the years.

In the mid-1600s franking privilege was implemented for the first time in Britain. Its creation coincided with the establishment of the U.K. Post Office, and it was meant to apply only to members of the British Parliament.

In 1873, nearly a hundred years after franking was first introduced in America, the U.S. Senate banned the practice entirely. The reason for this ban was that, as in Britain, the practice of franking was being abused by those to whom it applied. Because there were few limits on what kind of mail could be franked, members of Congress would regularly lend their signatures to friends and family. They would even send large packages home using franking to avoid postal fees. There is even a story of one man attaching a frank to his horse's bridle to send the animal home, though it is possible that this story is apocryphal.

Even during this ban, a few exceptions were made that allowed free postage of agricultural reports and the Congressional Record. In 1891, partial franking rights were restored, and in 1895, Congress fully reversed the ban.

Starting in 1895, it was legal for members of Congress to send franked mail, but not to receive it. A limit of one ounce was placed on any franked mail. This was raised to four ounces in 1904. In 1906, in an effort to reduce the prevalence of the friends and family of Congress members having their mail franked, Congress explicitly banned the use of franking by those to whom the privilege did not apply. In 1953, Congress began reimbursing the Postal Service for franked mail. This encouraged members of Congress to use their privileges more carefully, since they were being tracked by the Postal Service.

In 1973, Congress felt that franking privilege was still being abused and created new legislation to create new limitations on franked mail. This legislation limited the number of pieces of mail that a given member of Congress could frank in a period of time and made it more difficult for Congress members to use franking privilege in the lead-up to elections. Reforms continued to be introduced until 1977 when the practice stabilized again.

From 1986 to the present day, there have been a number of contemporary reforms to the franking system. In 1990, Congress required members to publicly disclose their franking expenditures for greater transparency. Each member was also given an allowance for franking that they were not permitted to exceed in a given congressional session. In 1996, the limit on pre-election franking was extended from 60 days before an election to 90 days before. Attempts have been made to reduce the cost of franking, which continues to be expensive for Congress. For example, in the 2015 fiscal year, franking cost a total of $8.3 million, around 0.2% of the total annual congressional budget for that year.

In 2019, the Franking Manual was significantly rewritten. This reform included new regulations that brought franking in line with digital mass communications. In January of 2020, the The House Commission on Congressional Mailing Standards (or the Franking Commission more colloquially) was renamed the House Communications Standards Commission. Rules governing franking were also simplified in the last few years, as have approval procedures and transparency. All Advisory Opinions on franking are now available for public view on the Clerk of the House's Public Disclosure website.

There are ongoing discussions on the future of franking. Will it be abolished entirely? Will the allowances be reduced? What will be done about the increasing costs of franking? All of these questions are topics of significant discussion in the U.S. today.

Who Has Franking Privilege?

Franking privilege applies to more than just members of Congress. Provided the mail being sent falls within the boundaries imposed by franking regulations, the following people are able to access this privilege:

This list of eligible groups is subject to negotiation and changes as new reforms and regulations are passed. For most of these groups, franking privilege is not a universal guarantee, but rather something that applies only under particular circumstances.

Pros and Cons of Franking Privilege

There are many pros and cons of franking privilege, which is why the practice has been controversial for so long but has remained a common practice. The advantages of franking include:

However, there are downsides to franking as well. These include:

These pros and cons form the basis of many of the debates on franking in the U.S. today.

There are limitations placed on members of Congress that forbid them from using franking to send mass mail within 90 days of an election. This practice is controversial and has undergone a large number of reforms since it was implemented in the U.S. in 1775.

Franking Privilege in Congress | What is the Franking the Privilege?
Related Study Materials

Block Grants Overview & Examples | What is a Block Grant?