Ethan McNeill, Dori Starnes
Learn about the Geats in Beowulf. Discover the Geatland, explore the Geat characters in the epic, review their background and role and understand their significance. Updated: 02/28/2022

The Geats in Beowulf

''Beowulf'' is work of epic poetry that was written sometime between the 6th and 7th centuries by an anonymous author. It depicts the deeds of a brave Geatish hero, Beowulf, who sails from Geatland to aid a Danish king. Geats are a sea-fairing warrior culture. They are featured as brave and noble warriors, who are masters of battle and sailing. The most notable Geats from the poem are Beowulf himself, King Hygelac, and Wiglaf, Beowulf's trusty liegeman. The poem also features semi-historical accounts of Geatish battles, conflicts, and kingly successions.

Geats, sometimes referred to as Goths or having originated from Gothic peoples, were a tribe that inhabited Geatland, now known as Gotland in modern Sweden. They shared northern-Germanic heritage and were depicted as tall, fair skinned, and having either blonde or red hair. They were in contact with Swedes, Danes, and inhabitants of the British Isles, such as the Angles and the Saxons. The earliest known mention of the Geats comes from the works of Ptolemy, a writer from 2nd century Alexandria.

While Geatland would eventually be conquered by Sweden, they stood as politically and ethically independent from the Swedes, or Svear, during the time before Swedish consolidation, until around the 10th century. This process of unifying Sweden and Geatland is highly debated among historians, but at some point Sweden and Geatland were unified under one Swedish king through conquest and assimilation.

The epic of Beowulf depicts the mighty deeds of its titular hero, but readers unfamiliar with the context of the poem may ask: what country is Beowulf from? Beowulf is from Geatland, a kingdom rather than a country, which is found in an area now encompassed by modern day Sweden.

The words Geat and Goth both derive from a Proto-Germanic word 'geutan' which means 'to pour.' This is likely a reference to the rivers that ran through Geatland, or to the Trollhatten waterfall on the 'River of Geats,' which ties the Geatish people with their local geography. It is debated how long Geatland remained independent of Sweden, estimates on their fall ranging from around 530 A.D. to 1000 A.D. It is likely that the Geats fell to Swedish military conquest. 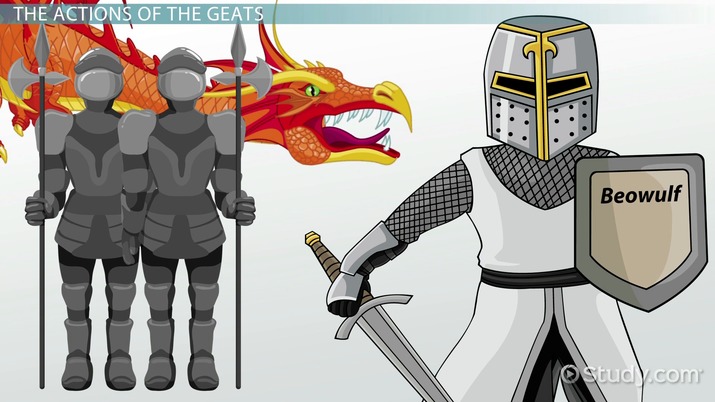 Coming up next: Shield Sheafson in Beowulf

Who Are the Geats in Beowulf?

Beowulf is concerned with the Geats, their lineage, and the Geatish heroes featured in the epic. The poem names several kings that can also be found in Norse sagas and historical records, such as s Ongentheow, Onela, Ohthere, Eadgils, and Hygelac. The following are the most important Geatish characters from Beowulf:

Significance of the Geats

The Geats, as depicted in the poem, are fierce, dedicated, and vigilant warriors, Beowulf being the embodiment of the ideal Geatish warrior. While the poem glorifies Geatish warriors, it also foreshadows the weakening of the Geatish people and their eventual collapse and conquest by Sweden. Beowulf is in his prime when he defends Heorot, but he represents the slow decay of Geatish power in his reign as king. Beowulf meets his end after he defeats his final foe, the colossal dragon. While Beowulf's liegeman and warriors stood by his side in his battles when he was a young hero, his men abandon him in his reign as king. Only Wiglaf faces the dragon, while the rest of the Geatish warriors flee.

Beowulf features two Swedish-Geatish wars, and because of a lack of evidence from the time period, is the only record of these conflicts. The first war highlights the defeat of the Swedish king Ongenpeow at the hands of the great Geatish warriors Eofor and Wulf Wonreding. King Hygelac rewards the warriors greatly, and Eofor is given one of Hygelac's daughters to marry.

The second Swedish-Geatish war is mentioned briefly and sees the death of King Heardred, ushering in Beowulf's reign. The final war is foreshadowed in Beowulf, suggesting that after Beowulf's death, the Geats were exposed and weak to foreign invaders. This may be a reference to King Sigurd Ring consolidating power over Sweden, Geatland, and Denmark after he defeated the Geatish King Harald Wartooth.

The Fate of the Geats

Geatland was ultimately absorbed by the Swedish through conquest. The narrative of Beowulf points to the fate of the Geats. When Wiglaf assumes the throne after Beowulf's death, it is foreshadowed that they are now exposed to threats from other kingdoms. Beowulf's warriors also foreshadow Geatland's conquest, as they are depicted as weak when compared to the older generations. Beowulf's men, aside from Wiglaf, abandon him to face the dragon alone, signifying that the warriors of Geatland had lost much of their bravery and spirit.

Historically, the Geats and Geatland were conquered by the Swedes, but it is highly contested when the Geats fully lost their independence. While some scholars point to the year 550 A.D., showing evidence that Geatland had been absorbed into Sweden at the conquest of the Swedish King Sigurd Ring, others contest that Geatish independence from Sweden may have endured until around 800 A.D., and still others argue that they may have lasted until around 100 A.D.. Whatever the case may be, Geatland no longer exists, and their fate was likely nuanced; Geatland and its people falling to conquest, cultural shifts, and assimilation.

The Geats, as featured in the epic poem Beowulf, were a northern-Germanic tribe that ruled over Geatland, now part of modern Sweden. Beowulf depicts the cultural values, origins, and lineage of the Geatish people as the titular hero Beowulf is a Geatish warrior. They were a sea-fairing warrior culture that were in frequent contact with other Scandinavian and British kingdoms and tribes of the time. They are described as being tall, fair skinned, and having red or blonde hair.

The poem is replete with Geatish warriors, the most important being Beowulf, Wiglaf, and King Hygelac. Each of these characters embody the highest virtues of Geatish warrior culture, while each character also foreshadows the eventual downfall of Geatland. When Beowulf fights the dragon, he is abandoned by all of his warriors, excluding Wiglaf, contrasting with Beowulf's loyal and brave liegemen who followed him into battle years ago. In turn, Wiglaf ascends to Beowulf's throne, and while Wiglaf is a brave warrior, the weakness of his people points to the coming conquering by Swedish forces.

The poem and history intersect in the aftermath of the Geatish kingdom. While it is contested as to when the Geats lost all independence to Sweden, the Geats as a political force are long gone, likely due to multiple conquests from Swedish kings. However, their legacy will continue through Beowulf's literary fame, speaking to a time, a place, and a warrior society now washed away by the tides of history.

How do the Geats support Beowulf?

Beowulf is aided by his trusted band of Geatish warriors and receives prestige from his king, Hygelac. Wiglaf, Beowulf's most loyal companion, fights for Beowulf no matter the challenge.

Who are the Geats in Beowulf?

The Geats were a northern-Germanic tribe that hailed from Geatland, which is now part of southern Sweden. In the Poem, Beowulf, Hygelac, and Wiglaf are all Geats.

Wyrd in Beowulf: Overview & Theme | What is Wyrd?