What Is a Geometric Sequence?

A geometric sequence is defined as "a sequence (that is, a set of ordered elements) where the ratio between two consecutive terms is always the same number, known as the constant ratio." In other words, to go from one term to the next, multiply the former by the ratio.

Now that the question "what is a geometric sequence?" was addressed, consider the following example: {eq}2,~6,~18,~54,~\cdots {/eq}. The suspension points after the fourth element indicate that the sequence continues indefinitely, so it is an infinite geometric sequence. In the given example, the constant ratio is {eq}3 {/eq}. The elements of a geometric sequence are said to be its terms and one might be interested in finding a generic term, say, the n-th term {eq}a_n {/eq}, given the initial term ({eq}a_1 {/eq}) and the common ratio {eq}r {/eq}. In this case, the general term is given by {eq}a_n~=~a_1r^{n-1} {/eq}, often referred to as the geometric sequence equation.

An infinite geometric sequence, in turn, is one that has infinite terms; that is, there is no last term in this type of sequence. Their representation usually ends with suspension points to indicate that the terms continue following the pattern of the terms displayed. 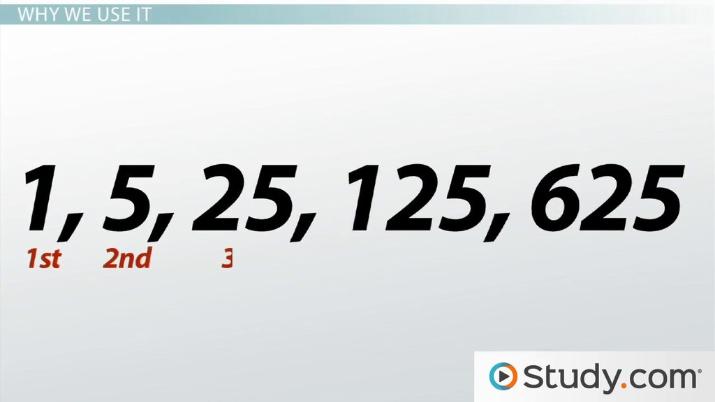 Coming up next: The Sum of the First n Terms of a Geometric Sequence

Therefore, proceeding with analogous reasoning, one might conclude that the geometric sequence formula for the nth term is {eq}a_n=a_1r^{n-1} {/eq}, where {eq}a_1 {/eq} is the first term, {eq}r {/eq} is the common ratio, and {eq}n {/eq} is the number of terms.

How to find r in a Geometric Sequence?

In a problem involving geometric sequences, some of the elements will be given and others will be desired. One of the elements that might be wanted is the common ratio. How to find {eq}r {/eq} in a geometric sequence? Simply divide any term (except for the first one) by its predecessor to obtain {eq}r {/eq}. In the first example, sequence {eq}2,~6,~18,~54,~\cdots {/eq} was given and it was claimed that the common ratio was {eq}3 {/eq}. Here is why: {eq}\frac{a_2}{a_1}~=~\frac{6}{2}~=~3 {/eq}. If several elements of a sequence are given, depending on the pair that is chosen to evaluate {eq}r {/eq}, the calculations can be easier, so one should choose the terms with that in mind.

How to Find a Term in a Geometric Sequence?

Given the formula for the general term of a geometric sequence, a coup;e of questions that arise are: how to find a term in a geometric sequence? What about the number of terms? Of course, in this type of situation, some pieces of information like the common ratio and the first term must be provided.

Now, to determine the number of elements in a finite sequence, given the first and last terms as well as the ratio, simply isolate the term with exponent {eq}n~-~1 {/eq} and solve an exponential equation for {eq}n {/eq}.

To bring the abstract types of problems from the previous section to a more tangible context, consider the following questions.

Find the fifth element of the infinite geometric sequence that has {eq}2 {/eq} as the first element and common ratio.

A geometric sequence (also called geometric progression) is one where the ratio between two consecutive elements, called terms, is the same number. For this reason, it is called the common ratio. Geometric sequences can be finite or infinite depending on the number of terms that it has. The general term of a geometric progression is {eq}a_n~=~a_1q^{n-1} {/eq}, with {eq}a_1 {/eq} being the first term, {eq}q {/eq}, the common ratio, and {eq}n {/eq} indicating the position of the desired term.

What is the general formula for a geometric sequence?

To have a geometric sequence we need an initial term a1 and a common ratio q. The general formula for the nth term of this sequence is an = a1q^(n-1).

How do you find the nth term in a geometric sequence?

Let a1 be the first term of a geometric series, q the common ratio, and n the nth term. The general term formula is an = a1q^(n-1).

How do you write a geometric sequence?

The Sum of the First n Terms of an Arithmetic Sequence

Finding the Common Ratio of a Geometric Sequence