Brittany W., John Williams
What is glycogen, and why is it important to humans? This lesson provides the glycogen definition as well as an explanation of glycogen formation and breakdown. Updated: 09/25/2021

Glycogen is defined as a glucose storage molecule. Glucose is a monosaccharide (single sugar molecule) that the body uses for energy. Since energy is critical in maintaining the body's daily function, it is important to have a means of energy storage for use between periods of food consumption. Glycogen is one way the body chooses to store energy and the only way it chooses to store glucose. Glycogen belongs to a larger family of macromolecules (large molecules with a high number of atoms) called carbohydrates. Carbohydrates are a group of organic molecules that include sugars, starch, and cellulose.

Is glycogen a lipid? No, lipids are oils and fats. While fat is another form of energy used and stored by the body (via adipose tissue), sugar and fat are two different biomolecules that provide different amounts of energy and require vastly different forms of synthesis and metabolism.

Glycogen formation exists to store excess sugar that the body is not currently using. As mentioned, energy storage is critical for survival. In times of little to no food consumption (fasting) or high-energy demand (exercise), the body will be able to survive on energy stores. Typically, the body will deplete its glycogen stores before utilizing fat. This is because it is easier for the body to convert glycogen to energy than it is to convert fat.

How is glycogen formed? Glycogen production occurs through a process called glycogenesis. Glycogenesis is a series of biochemical reactions used to convert singular glucose molecules into glycogen macromolecules. This process is stimulated by the hormone insulin, which signifies that blood sugar levels are too high and must be stored to remove them from the blood. 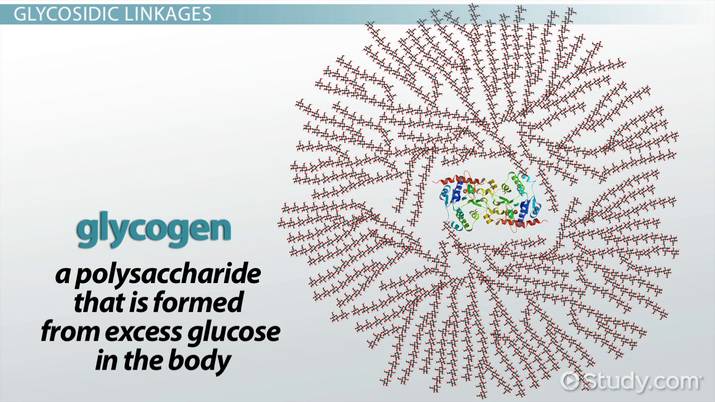 Where is Glycogen Stored?

Once glycogen is formed, it is stored in either the liver or the muscles.

Glycogen is stored in skeletal muscles to allow for easy access during high-energy physical activities like exercise or sports. It is also stored in cardiac muscle to sustain the constant pumping of blood, and to a much lesser degree, smooth muscle to sustain organ function. Recall that glycogen is the preferred energy source because it is easier to break down than fat. It makes sense then that an easily accessible energy source would be placed among muscle cells that need it the most.

When muscles are in need of energy, glycogen is broken down by a process called glycogenolysis. Glycogenolysis is a series of biochemical pathways used to produce singular glucose molecules from glycogen storage. Glycogenolysis should not be confused with:

As mentioned, the body releases a hormone called insulin when blood glucose levels are high. Insulin triggers glycogenesis in the muscles and liver so that excess sugar is removed from the blood and formed into glycogen. Alternatively, when blood glucose levels are too low, the body releases a hormone called glucagon. Glucagon triggers glycogenolysis in the muscles to provide sugar and support muscular function. It triggers glycogenolysis in the liver to replenish glucose in the blood. Insulin and glucagon are made and released by the pancreas.

So, what does glycogen do? It stores glucose, and it is either created or released under hormonal control to meet the body's energy needs.

The formation and breakdown of glycogen are more than just biological concepts or pathways. They have real implications in daily life, especially in times of dysfunction. Glycogen examples of disorder and depletion include:

Glycogen is a glucose storage molecule found in both liver and muscle tissue. It is a polysaccharide that is formed from excess sugar in the body. The process of converting a single sugar molecule into glycogen is called glycogenesis. Insulin is the hormone that helps with the conversion of glucose to glycogen.

Diabetes is the most common glycogen-related disorder. It occurs when either the pancreas cannot make insulin due to a genetic defect or when the pancreas, liver, and muscles are fatigued due to chronically high blood glucose levels. Either way, the body is unable to regulate the amount of glucose in the blood. Another glycogen-related disorder is glycogen depletion. This occurs when endurance athletes deplete glycogen stores, damage muscles, and experience extreme fatigue. Glycogen depletion is most often remedied by prolonged periods of rest and a healthy diet of sufficient carbohydrates.

Glycogen is a glucose storage molecule in the liver and muscle. It stores energy in the form of glucose for the body to use when needed.

What is the function of glycogen?

Glycogen stores glucose for release to muscles in times of physical activity. It releases glucose to the liver to increase blood glucose levels.

Yes. Humans store glycogen in the liver and muscle. Glycogen is the body's way of storing multiple glucose molecules for future energy use.

Is glycogen a sugar?

Yes. Glycogen is a polysaccharide, meaning it is a chain of multiple sugar molecules. Multiple glucose molecules make up one glycogen macromolecule.

Granum Concept, Function & Importance | What is a Granum?