What is a Grassland?

A grassland is a large open area that is mainly covered by grass, with less than 10% covered by trees or shrubs. The reason for the lack of trees and shrubs is that these lands receive less rain each year compared to other areas that turn into forests. Grasslands have incredible biodiversity and extensive food chains. 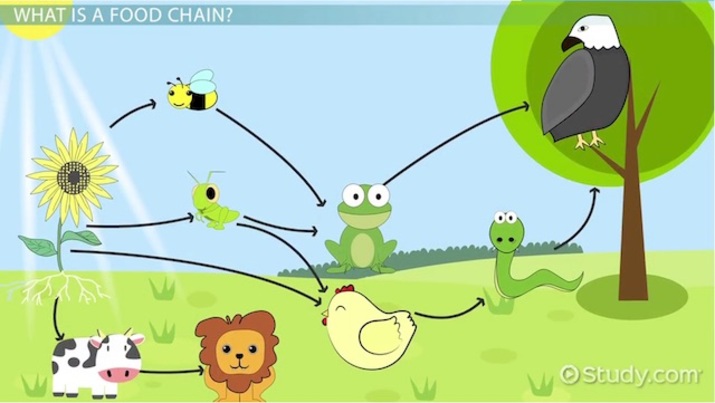 Try it now
Back
Coming up next: Human Food Chain: Definition & Examples

What is a Food Chain?

Animals eat to get energy in the form of nutrients. A food chain is a feeding relationship between organisms in the form of a linear flow of energy that shows 'who eats whom' within an ecosystem. In a food chain, nutrients are passed from one organism to the next. For example, grass produces its food from sunlight, an impala eats the grass, then the impala is later eaten by a cheetah.

The food chain order is as follows:

The following is an example of a food chain in the grasslands:

In this example, the grass makes its own food for energy. The grasshopper eats the grass and gets its nutrients which it converts into energy. The prairie dog then eats the grasshopper and some of these nutrients are passes onto the prairie dog for energy. The coyote then eats the prairie dog, and the trend continues. If any of the prairie dog is left to decompose, it can be eaten by vultures. In this example, vultures act as quaternary consumers instead of tertiary consumers as previously mentioned because they ate the prairie dog, which was a tertiary consumer. Note that the level an animal is on the chain can change depending on 'who eats whom.' Uneaten dead animals may also be broken down into nutrients by decomposers like bacteria, fungi (mushrooms), and earthworms. These nutrients then go back into the soil where primary producers (like grass) use them to grow. The primary consumers then eat the producers, and the cycle continues.

What is a Food Web?

The food chain explains the flow of energy from one organism to the other in a linear way. An ecosystem is not as simple in real life thus, a food chain is a basic description of organisms' interactions and the flow of energy. Instead, many animals within an ecosystem can eat the grass, or the grasshopper, or the prairie dog, and so on. In fact, in an ecosystem, many food chains make many connections that intertwine with one another creating a food web which better describes a realistic feeding relationship between organisms.

The following is an example of a grassland biome food web:

The following are examples of animals that can be found in a grassland food web:

Note that fish are not found in the grasslands. Ponds, lakes, rivers, streams, and wetlands can be found in grasslands but these are considered to be different ecosystems.

A grassland is an area of land primarily covered by grasses, with less than 10% of the area covered by trees or shrubs. Nevertheless, grasslands have great biodiversity and extensive food chains. A food chain is a linear depiction of 'who eats whom' in an ecosystem. Animals like insects, frogs, zebras, mule deer, and cougars can be found in a grassland ecosystem. However, fish are not found in grasslands, as their watery habitats are considered to be different ecosystems. Grassland animals like the ones previously mentioned are not able to make their own food, and are called consumers. Plants that are able to make their own food from sunlight are called producers. Uneaten dead animals and plants may also be broken down into nutrients by decomposers like bacteria, fungi (mushrooms), and earthworms. An ecosystem is not simple as the linear relationships described by a food chain. Instead, the plants and animals in ecosystems make many connections with one another. This creates a food web which is a better description of the real feeding relationships between organisms.

What are four producers in the grasslands?

Primary producers are organisms that can make their own food. Four examples of producers in the grasslands include grasses, wildflowers, trees (very scarce), and plants like clovers.

How does the food chain work in the grasslands?

What is the food web in the grasslands?

Food webs are a more complex description of the energy or nutrient flow between organisms compared to a food chain. A realistic energy flow between living things in an ecosystem is not linear, instead, it looks like a web with many interwoven connections.

What is the Ocean Food Chain?

What is the Ocean Food Chain?