Copyright
Janelle Barowski, Christopher Muscato, Sasha Blakeley
Who and what are the Greek gods? See why Greek mythology is important, and discover the history and background of Greek gods & goddesses Updated: 08/23/2021

What is Greek Mythology?

Greek mythology was an integral part of the everyday life of the ancient people. These stories were the basis for their culture and rituals. Mythology is a collection of stories belonging to a particular culture or religion. It helps form the morals and ideals that religion and society focus on.

The ancient Greeks used mythology to help them understand the natural world around them, as well as the characteristics and plights of humankind. Holidays, months, and celestial bodies were named and associated with deities in mind.

Ancient Greek mythology made up the basis for the widespread polytheistic religion at that time, and the gods were featured prominently in the fables. The Greek pantheon is the collection of important gods that ancient Greek mythology portrayed. These stories had clear themes of right and wrong, and moral conundrums were common. The gods helped the Greek people understand human nature.

Myths helped people better understand their past, their surroundings, and how to navigate their world morally.

Why is Greek Mythology Important?

Greek mythology is a snapshot in time of the ideals, religion, and fantasies of the ancient Greek people. Due to their alphabet and emphasis on myths, researchers can understand their society with depth and breadth that other past civilizations are not afforded.

Greek mythology is important today because the modern world is still influenced by the deities of the past. Mars and March are both named after the ancient Greek god Mars, the powerful protector of Rome. It is estimated that over 150,000 modern-day words come from ancient Greek, including Greek mythology.

Greek mythology also rendered their magical versions of real events, blending fiction and history. During the heroic age of Greek mythology, great mortal heroes were based on historical events with a supernatural twist. The Trojan war is an excellent example. 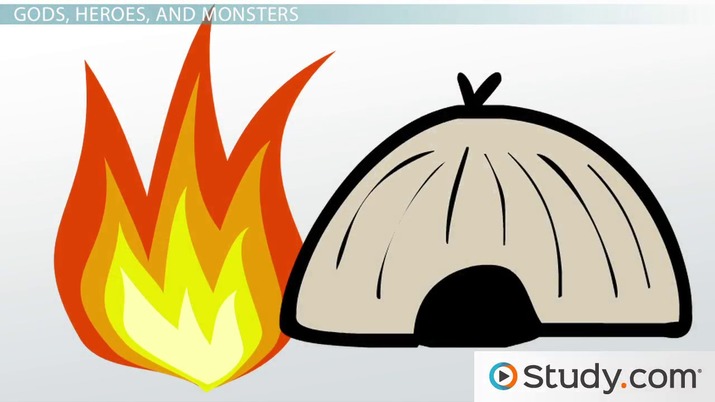 Coming up next: The Iliad: Greek Epic

Who are the Greek gods? The ancient Greeks believed in a polytheistic religion- meaning that there was more than one god that they worshiped. Each god was given a specific area of life or idea to represent. The gods were considered personifications of their concepts.

There were major deities that were more powerful than other gods. The Titans and the Olympians were impressive gods who ruled over their less powerful peers. The Titans were the children of Gaia. They ruled the Universe until they were overthrown by the Olympians.

A number of the myths the Greek people wrote focussed on the gods, their conflicts, and moral dilemmas.

Greek mythology portrayed gods as immortal people who influenced a certain area of life and usually had powers associated with their represented area. For example, Oceanus was a water god who had control over the Oceanus river, an ancient river that encircled the world. Gods were not the only main characters in ancient myths.

In addition to gods, Greek mythology showcased a variety of supernatural creatures. Cerberus, or the hound of Hades, was a fearsome three-headed monster who prevented the damned from leaving the Underworld. The Chimera, a three-headed hybrid of a goat, lion, and snake, terrorized the countryside of ancient Anatolia. Satyr was a fertility spirit of the wild and was a mix of beast and man. It was common for nymphs, spirits, monsters, and mortals to be featured as prominent figures in ancient Greek mythology.

The Greek gods are a part of a polytheistic religion and the people at the time believed their gods to be real. They incorporated their beliefs of the gods into everyday life with festivals, rituals, and sacrifices to gain their favor. Temples were built to honor them, some of which still stand. Greek gods were believed in by the ancient Greeks in the same way that modern humans believe in deities from present day religions.

In modern times, the Greek myths read more like cautionary tales. However, the Hellenism religion is a small group of people who still believe in the ancient Greek polytheistic religion.

In Greek mythology, there are around 360 gods, including minor deities. This section will delve into some minor gods and some Olympians, the most powerful gods who lived on Mount Olympian.

Zeus was the king of the cosmos and ruled from Mount Olympus with his queen, Hera. He was born to Cronus, the king of the sky, and Gaia, the goddess of the Earth. Cronus usurped his father, Uranus, and Zeus would do the same to him. The Olympians overthrew the Titans in the Titanomachy War.

He is often associated with lightning bolts. The god of the sky and law and order, Zeus was a fair ruler.

Hera was the queen of the cosmos and the protective wife of Zeus. She was renowned for her fiery temper and was the goddess of marriage, women, and childbirth.

Hera was a lead figure in Greek mythology, in particular with stories about Zeus' infidelity. This can be seen with the 12 Labors of Hercules. She was also a protagonist in the Trojan War.

His wife was Persephone, the daughter of Demeter, the Olympian goddess of agriculture. When Hades abducted Persephone to become his wife in the Underworld, Demeter caused a famine that lasted until her return. This is how the ancient Greeks explained winter.

Aphrodite was the Greek goddess of love and sexual desire and was born when Cronus overthrew his father, Uranus. Aphrodite is the wife of Hephaistos, although she is known for her promiscuity with other figures.

Aphrodite is mischievous as well as illustrious. She was a protagonist in the Trojan War, which she started with a beauty contest that went awry. This blend of myth and history is an excellent example of the heroic age.

Ares is the aggressive Greek god of war and son of Zeus and Hera. He is best known for his role in conflicts, such as when he unsuccessfully battles Hercules.

Ares is an unpopular god due to his combative personality.

Poseidon is the god of the seas, rivers, earthquakes, and storms. Known for the calamity he can cause on the ocean and land, he was a forceful deity. He was often in contempt of his brother, Zeus, and would thwart his plans.

He lived under the ocean in a palace with his wife Tethys, another water god. It was Poseidon's witchcraft that created the loathsome Minotaur. He also led the Greeks into battle during the Trojan War myths.

Apollo was the twin brother of Artemis and the god of music, divination, and the bow. He was a popular god, as he was closely associated with music and healing. He absolved men of their sins, healed people, and sent messages down to the mortals through oracles. The Oracle of Delphi is a Greek myth that highlights Apollo as the god of divination.

Artemis was the Greek goddess of hunting, chastity, and wild nature. The twin sister of Apollo, their parents are Zeus and Leto, much to the chagrin of Hera.

She is the personification of a huntress and is known as a sharpshooter who spends her time in the wilderness. Many of the myths involving Artemis depict her wounding an enemy with her bow and arrow.

Despite its popularity, Greek polytheism declined for several reasons. The first being, it was expensive to throw lavish feasts, parades and build temples. Another reason was a series of invasions and intermingling of cultures meant that there was an introduction of new ideas in the area.

There is no single text or single author for Greek mythology and the Greek pantheon. Instead, it's a collection of authors over some time.

Before it was written down, it was an oral tradition for hundreds of years. The earliest evidence of Greek mythology in oral form was during the Bronze age, which began in approximately 3300 B.C.

Greek authors began to build on early oral tradition to create the vast collection of Greek myths that made up their polytheistic religion. Hesiod, Homer, and Ovid were all ancient authors who contributed to Greek mythology.

Greek mythology was a salient and dominating part of the life of the ancient people. These myths focused on the gods, magical creatures, and heroes of the world. The Heroic Age was a series of myths that were magical but inspired by historical events.

Greek gods were portrayed as immortal humans who represented a particular part of life. There were two major gods: The Titans and the Olympians. The Titans were the offspring of Gaia. They ruled the cosmos until Zeus overthrew them in the Titanomachy War. Cronus was a Titan who overthrew his father, Uranus, to lead the cosmos. The Olympians are the gods who ruled after the Titans and lived on Mount Olympus.

Present Your Version of a Greek Myth

Choose a God, Goddess, or Titan

Choose a Greek god, goddess, or titan that you think is interesting. You can choose one of the ones from this lesson, or do your own research to learn more! There are dozens to choose from. Write down the most important elements of your character's story, like:

Some gods have many stories associated with them. It's okay to choose just one, as long as you can touch on the main aspects of what makes that god important in Greek Mythology.

The Ancient Greeks were known for their storytelling. They even invented theatre and acting! Greek plays usually only featured two or three actors who might each play more than one character. Ancient Greeks were also great oral storytellers. Epic poems like The Iliad and The Odyssey were performed by a single person who could remember every detail of the story.

For this assignment, you can choose to work individually or in groups of two or three. Write your god's tale as a short play with multiple roles, or as a story for one narrator. You will be bringing ancient myths back to life and deepening your understanding of Greek Mythology.

The Founding of Confucianism: Overview & Influence