Copyright
Janelle Barowski, Mary Deering
Who are the Titans in Greek mythology? How many Titans were there and how were they created? See a description of the mythical Titans and their relation to Olympians. Updated: 08/21/2021

Origin of the Titans

The three gods who followed were:

Not long after Gaea was created, she gave birth by herself to Uranus, the god of the sky. Together, these primordial gods birthed the Titans and were the leaders of the cosmos before the Olympians.

Who are the Greek Titans in mythology? The Titans were the pre-Olympian gods who ruled the cosmos in ancient Greek mythology before the Titanomachy War. They were giant, immortal deities and considered the first generational gods born from the primordial gods, Uranus and Gaea. They ruled from Mount Orthys, and each god had its realm to rule over. The Titans were the first generation of divine gods.

There were twelve major Greek Titans in mythology:

Because there are twelve ancient Titans, salient Gods born to Gaea and Uranus soon after creation, it is best to list them and their attributes.

The Titans were ruled by Gaea and Uranus for many years, though Uranus was a cruel father and ruler. He imprisoned his other children, the cyclops and the Hecatoncheires because he considered them to be loathsome behemoths.

Gaea, distraught that her children were imprisoned in Tartarus, the deepest pit in Hades, enlisted the help of Cronus and the other Titans to overthrow Uranus.

Finally, Cronos agreed and snuck into where Uranus was sleeping one night. The other Titans held Uranus down while Cronos castrated his father with a sickle that was provided by Gaea.

Uranus, immortal, was wounded and transferred his rein to Cronos and his wife, Rhea. Before he left, Uranus prophesied that Cronos would be overthrown by his children, perpetuating the cycle of violence.

Cronos and Rhea would go on to give birth to Zeus, and the other eleven Olympian gods. These powerful gods would rule after the Titans were overthrown during the Titanomachy War.

The Titans versus the Olympians

Cronos, the god of time, and Rhea, the goddess of fertility, ruled over the cosmos and the other Greek Titans. They gave birth to twelve divine gods of their own, who would come to be known as the Olympians.

The twelve Olympian gods were: 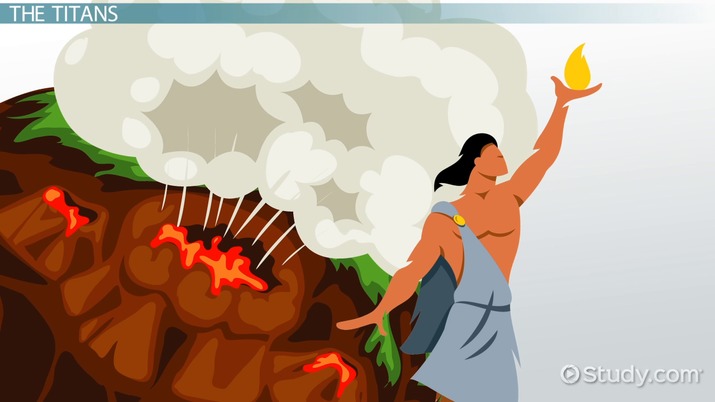 Coming up next: Who is Apollo? - Greek God & Concept

The Olympians would go on to rule the cosmos after overthrowing the older generation of the Titans. Cronos, the father of time, became paranoid after Uranus prophesied that his children would overthrow him. To prevent this from happening, he swallowed all his children right after birth.

Rhea became distraught and saved Zeus from this fate. She hid him away on an island of Crete until he was old enough to battle his father.

When the time came, he snuck his father an antiemetic potion into his wine, forcing him to regurgitate his immortal siblings, now fully grown.

The Olympians battles the Titans viciously for the ability to rule the cosmos for ten years, during the Titanomachy War. Zeus and the Olympians were finally victorious and ascended Mount Olympus to rule the world as the supreme gods.

Zeus imprisoned the Titans in Tartarus, the deepest pit in the Underworld.

The Titans were the first generation of gods to rule the cosmos and were twelve immortal brothers and sisters. Uranus and Gaea were the primordial gods who gave birth to the Titans. The stories involving the Titans allowed the Greeks to explain earthquakes, fire, and the movement of the sun and moon.

Prometheus was the son of Iapetus, a Titan. Prometheus had angered Zeus when he tricked the gods and gave fire to humanity. This is one way that the ancient Greeks used Greek mythology to help them understand their surroundings. The stories of the Titans and the Olympians aided the Greeks in understanding their environment and the history of the universe.

What is the difference between a god and a Titan?

A Titan is a type of god, but a group of gods that ruled before the more well-known Olympian gods.

Is Zeus a Titan?

Zeus is not a Titan. Zeus is an Olympian god, which was the generation of gods who ruled after the Titans.

What is the difference between a Titan and a God?

A Titan is a type of god, but a group of gods that ruled before the more well-known Olympian gods.

Greek Titans in Mythology | Who are the Titans?
Related Study Materials

Hyperion in Greek Mythology: God of Light | Who is Hyperion?