Copyright
Amanda Carpenter, Karin Gonzalez
What is grunge music? Learn about the grunge movement, grunge culture, and grunge people. Read about the history of grunge music and where and when it developed. Updated: 08/23/2021 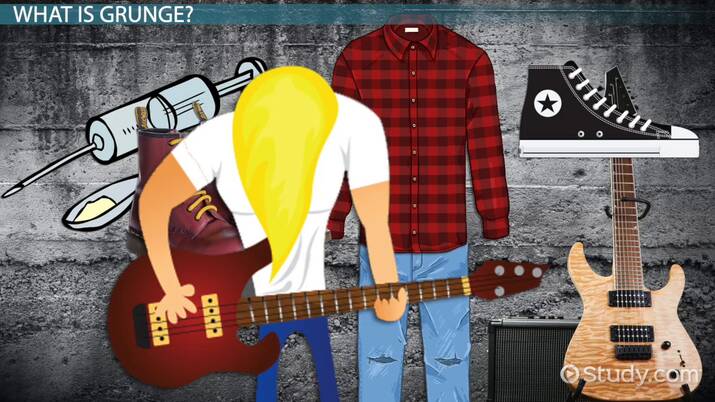 Try it now
Back
Coming up next: What is Heavy Metal Subculture?

What Is Grunge Music?

Grunge music is a mix of punk and heavy metal. It was a distinctive approach to music that is closely tied into the grunge culture and movement. Grunge music is distinct from other types of music in the following ways:

Guitars in grunge music were described as sludgy. Guitar sludge was made up of electric guitars riffs that were heavily distorted by using distortion pedals and thunderous amplifiers. Drum kits were four and six-piece. The drummer required great skill to make the drumbeat required in grunge music. The vocals and lyrics were angry and dark which created a feeling of angst in the listener.

Some grunge music acts are:

Alice in Chains had a unique sound with heavy riffing metal. The lead singer, Layne Staley wrote songs that often contained lyrics about drug abuse and suicide. Nirvana is arguably the most influential grunge band of the 90s. The band was known for its diversity in songwriting and its personal lyrics written by the lead singer. Their second album blew the doors open for the grunge movement to become mainstream. Soundgarden had a sound that resembled Black Sabbath and it was the first grunge band to sign to a mainstream label. Pearl Jam outsold most grunge bands of the 90s. The lead singer, Eddie Vedder, was known for his powerful, gravelly singing voice. Pearl Jam wrote songs that addressed issues of the time, including school shootings and drug abuse.

The grunge subculture is sometimes called the Seattle Sound, because it originated in Seattle, Washington. Grunge subculture embodied the so-called burnouts of society. The followers of the grunge culture protested against the American dream of the house with the white picket fence and conforming to the norms of society. Most grunge followers didn't care about appearance and came across as idle and indifferent to most of society. This indifference could not be further from the truth, as most followers of the grunge culture focused on making music and fighting for social rights.

The term grunge means dirt or grime, and it was used to describe the fashion of the grunge subculture. Grunge musicians could typically be identified by:

Grunge fashion was all about individuality and not conforming to society's view of the norm.

Many grunge musicians had long, unkempt hair that fell into their faces. Most musicians and followers of the grunge subculture slouched when they walked and held a general look of dirtiness. There was not much distinction between male and female followers of the grunge subculture. Females didn't wash their hair, and some opted to shave their heads, all in defiance to the gender roles of the time.

The worldview of the grunge subculture can vary depending on who is being asked. The members of the subculture viewed themselves trying to make society a better place, while outsiders of the culture saw them as delinquent troublemakers.

The worldview of the grunge subculture can be seen below:

The History of Grunge

Grunge music began in Seattle, Washington in the mid-'80s. Seattle bands began to mix metal and punk rock. Metal music of this time was made up of metal hair bands: Warrant, Poison, Cinderella, Bon Jovi, and the like. These bands were famous for their overblown hair, flashy clothing, and heavy makeup. Many believe that grunge music began in opposition to bands such as these.

The grunge music movement began in 1985 with the release of the following albums:

Sub Pop Records opened in 1986 and released music from Soundgarden, Mudhoney, and eventually Nirvana. Sub Pop is credited as playing a major role in the birth of grunge music. Soundgarden, Alice in Chains, and Nirvana were among the first grunge bands to sign to major record labels. Alice in Chains and Soundgarden's debut albums didn't receive much exposure, but Nirvana's debut album was a smash hit. In January of 1992, it reached number 1 on the billboard 100 chart. Nirvana's album changed everything in the music industry because it was a welcome change to the hair bands of the 80s. Although grunge took a long time to develop, it was relatively short-lived, dying out around 1995.

The Origins of Grunge

The origin of grunge traces back to Seattle, Washington, but there have been many musical and cultural influences to the sound. Several artists influenced grunge music. Some of these artists can be seen and their influence on grunge can be seen below:

When Did Grunge Develop?

Grunge developed during the 1980s in the Northwest United States. The band the Melvins is attributed to the formation of grunge music. The band created a metal and punk sound, using KISS, Black Sabbath, and Led Zeppelin as musical influences. Sub Pop Records was founded shortly after and created grunge music with bands such as Skin Yard, Malfunkshun, and Alice in Chains.

Some of the early grunge bands went through many transformations. Green River split into Mudhoney and Mother Love Bone. Mother Love Bone eventually became Pearl Jam. Nirvana began with only a lead singer and bassist, later adding the drummer with the advice of the Melvins. These bands had a huge impact on the following cities and towns:

The regional character of grunge in the Northwest United States, as well as other areas, is the use of anguished lyrics, an unkempt appearance, and music played with guitar distortion.

Grunge became the mainstream in the early 1990s. Soundgarden, Nirvana, and Alice in Chains had signed major record deals and grunge began to pick up momentum. Nirvana released its second album called Nevermind in September of 1991. The first single was "Smells like teen spirit" and was repeatedly played on MTV and radio stations. By Christmas 400,000 copies of the album had been sold and by January of 1992, Nevermind made it to the Billboard 200; knocking Michael Jackson the top spot. The success of Nevermind popularized grunge and moved its music into the mainstream. Pearl Jam followed suit with their album Ten, Soundgarden with the album Badmotorfinger, and Alice in Chains' with their album Dirt.

Centering on the grunge subculture, the movie Singles was released in 1992. The movie contained cameos by Pearl Jam, Alice in Chains, and Soundgarden. The movie was filmed in Seattle and helped to popularize grunge fashion and music.

The Decline of Grunge

The popularity of the grunge movement was short-lived, declining in the late 1990s. Many grunge bands resented their sudden fame and chose to retreat from the spotlight. The decline of grunge music began with the death of Kurt Cobain, the lead singer of Nirvana. Cobain struggled with drug addiction and committed suicide in his Seattle home in April of 1994. Without a lead singer, the band broke up. That same year, Pearl Jam sued Ticketmaster over service charges added to their concert tickets. The lawsuit caused the band to cancel their summer tour. The grunge movement continued to decline because bands such as Alice in Chains, Hole, and Stone Temple Pilots, were battling drug addictions. In 1997, Soundgarden broke up because of disagreements among the band members.

Eventually, grunge moved into the post-grunge era and made way for bands such as:

These bands are sometimes referred to as scrunge. They were not around during the birth of grunge but instead imitated the sound and lyrics of original grunge songs and artists.

Impact on Culture and Music

Alternative rock bands have carried the style and sound of grunge into today's music. Alternative rock has the raspy sounds of grunge but with clean tones. Grunge influenced the path of American music and pop culture in the following ways:

Dave Grohl, the drummer for Nirvana, helped create many bands such as Queens of the Stone Age, Foo Fighters, and Nine Inch Nails. Chris Cornell, the lead singer of Soundgarden went on to form a post-grunge band called Audioslave.

The grunge subculture developed in Seattle, Washington in the '80s and became popular with grunge music. Grunge music contains sad or mad lyrics that usually reference problems in society. The grunge subculture is most concerned with social justice and not conforming to the norms of society. The term grunge means dirt. The followers of this subculture liked to wear: flannel shirts, t-shirts with slogans, ripped jeans, and combat boots. Most had an unkempt appearance and dirty hair.

The following bands gave birth to the grunge subculture:

Early grunge bands went through many transformations such as bands breaking up and forming new bands. Grunge was influenced by artists like: the Pixies, Neil Young, Sonic Youth, and Black Sabbath. Grunge's mainstream influence increased with the release of Nirvana's Nevermind album and the movie Singles. The grunge subculture started to decline in 1994 after the death of Kurt Cobain. The decline continued because many of the bands were battling drug addictions.

Eventually, the grunge era moved into the post-grunge era with bands such as:

Grunge music had an impact on today's culture and music with the tunes of alternative rock. This type of music has clean tones with the harsh sounds of grunge.

Is Grunge an aesthetic?

Grunge is a mixture of heavy metal and punk music. Grunge song lyrics are rebellious and sung with powerful vocals. Guitars are played with a dirty sound that includes reverberation.

What is the style grunge?

What Is a Hipster? | Hipster Subculture Examples

Textile & Fabric Overview & Examples | What Is a Textile?

What Is a Hipster? | Hipster Subculture Examples

Textile & Fabric Overview & Examples | What Is a Textile?