Kayla Armstead, Clint Hughes
Explore the differences between the beliefs of Hamilton and Jefferson. Learn the definitions of Federalist and a Democratic-Republican, as well as their similarities and differences. Updated: 12/15/2021

Alexander Hamilton and Thomas Jefferson were both active in the writing of America's founding document, the United States Constitution. Although they were colleagues, their political perspectives varied widely. They were both advisors for George Washington, the first president of the United States. George Washington famously warned Americans that the formation of political parties would be to the detriment of the U.S. government. Neither man heeded this warning, however, and Alexander Hamilton went on to become the leader of the Federalist Party, while Thomas Jefferson would go on to lead the Democratic-Republicans.

As the first secretary of the treasury, Hamilton centered his political beliefs around America's economic plan. When founding a new country, all political systems must be constructed from scratch. The way that these institutions are built can determine the success or failure of the country. Hamilton believed that America's economy should be based on manufacturing and commerce. He believed that trade and the production of goods would provide the American economy with a strong foundation. He also believed that well-educated property owners should be trusted to run the country. He did not feel that the common people were suited to governance. In fact, during Hamilton's lifetime, men who did not own property could not vote. He wanted the federal government to have the most power, and so sided with the Federalist Party.

Thomas Jefferson was the first secretary of state, the second vice president, and the third president of the United States. Drawing on his various political experiences, he believed that the agrarian economy of the south should form the foundation of the economy. As a plantation farmer himself, as well as a slave owner, he defended the plantation system for both his own self-interest and the interest of his home state, Virginia. Jefferson believed that the general public could be trusted to govern the country. He did not believe that wealthy elites should be the only ones with political power, and even once called Hamilton a ''monarchist'' for believing so. 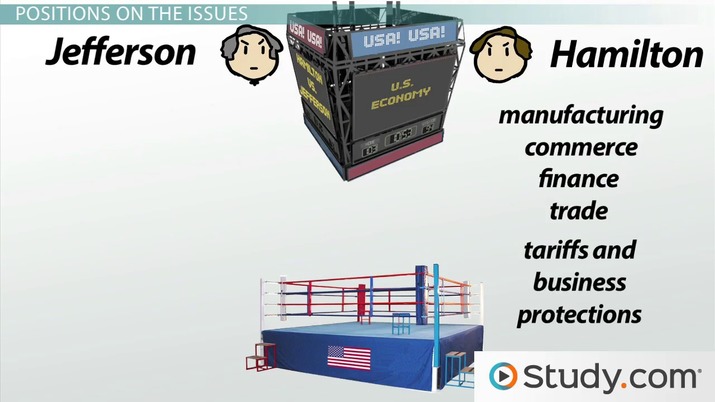 Try it now
Back
Coming up next: The French Revolution, Jay Treaty and Treaty of San Lorenzo

The Federalist Party believed in the need for a strong central government. They claimed it would protect the freedoms they had fought for in the American Revolution. At the same time, they also argued for a loose interpretation of the Constitution in order to ensure that the freedoms and liberties earned by the Revolution would remain. Federalists also wanted to create a national bank to increase the government's control of the economy. They believed that manufacturing, commerce, and foreign trade were key to a strong economy, and that it should be the job of the federal government to regulate this commerce. They also believed that wealthy, well-educated property owners should govern the country. Generally, supporters of federalism agreed with the Federalists' political philosophy because it aligned with their own interests. Wealthy landowners preferred this system, including manufacturers, bankers, and merchants. Many Federalists lived in New England, as industry was the basis of the economy there.

The Democratic-Republican Party believed that the government should be smaller to protect individual freedoms. They opposed a strong central government and believed that the Constitution should be interpreted strictly. They also emphasized states' rights, arguing that individual states should be able to hold power, not the federal government. Democratic-Republicans believed the United States' economy should be agrarian, based on farming. Because of this, they argued that small farmers and the common people should govern. Since only property owners could vote at this time, they were in favor of lowering voting regulations to allow the common people to have a voice.

Differences Between Federalists and Democratic-Republicans

There were many differences between Federalists and Democratic-Republicans, just as there were between their respective founders, Hamilton and Jefferson. The differences in political beliefs led to the formation of a two-party system in the United States, contrary to George Washington's wishes.

Similarities Between Federalists and Democratic-Republicans

George Washington did not believe in political parties and subsequently warned Americans in his famous farewell address against their formation. Despite his wishes, Alexander Hamilton emerged as a leader of the Federalists, and Thomas Jefferson emerged as a leader of the Democratic-Republicans. This led to the formation of a two-party political system that has remained throughout the United States' history. The two parties were very different in their political beliefs. The Federalists were in favor of a strong central government. They believed in the formation of a national bank and wanted the economy to be based on manufacturing, foreign trade, and commerce. They also believed that wealthy property owners were the best fit to govern the country. Democratic-Republicans, on the other hand, were opposed to a strong central government and argued for stronger states' rights. They wanted an economy based on small farmers, otherwise known as an agrarian society. They also believed that common people and farmers should govern the country and wanted to lower voting restrictions to allow for this to happen. Despite their differences, however, both political parties wanted to form a government that supported the ideas of liberty and freedom from the American Revolution.

Which party did the Federalists become?

When the Federalist Party was dissolved in 1835, many of their supporters moved to become a part of the Whig Party.

What were the main issues dividing the Federalists and the Democratic-Republicans?

What did Thomas Jefferson and Alexander Hamilton disagree on?